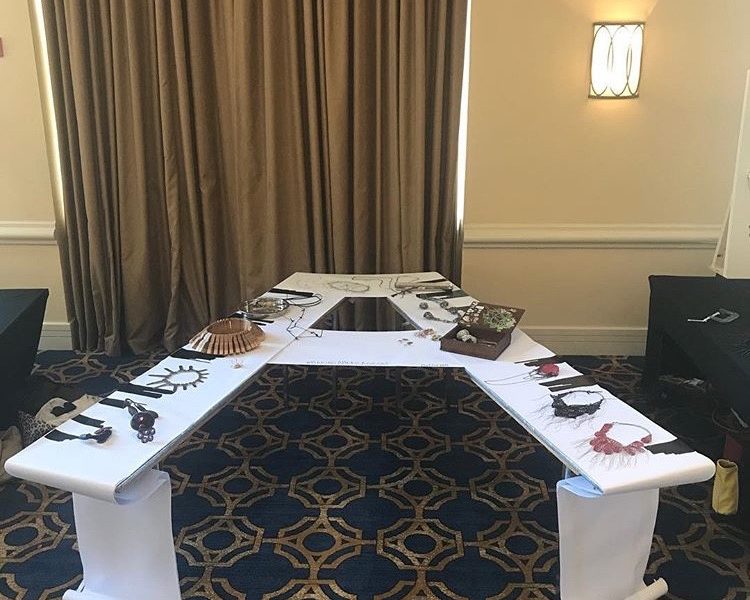 When we launched Platforma in 2014, our first exhibition was called F-1. It was important for us to make this first show more personal and what united us was our immigrant status. I came to this country as a young child while Ruta came in her early 20’s for college. At that point we wanted to celebrate all of the foreigners, who like us, make America their home and contribute a little bit of themselves to this beautiful country. We never dreamed of revisiting that show. However at this point, we find that it is even more relevant to celebrate the contributions of foreigners, and  Make America Great, with an emphasis on the Make part. Our subtitle for the F-1 exhibition is Foreigners Living the American Jewelery Dream, and we stand behind this 100%.

The F-1 exhibition showcased work produced by foreign-born artists who were educated in the United States under an F-1 (foreign student) visa status. F-1 included the work of ten artists who had come to the United States from all corners of the world, including Belgium, South Africa, China, Korea, Germany, Colombia, Venezuela, and Japan. Their work, from aesthetics to materials (wood, concrete, porcelain, paper, fabric), is as diverse as their backgrounds. These individuals’ work combines the methodologies taught in United States schools with cultural references and art traditions that they identify with from home.

For our second take on this theme, we would like to include a new group of artists who are in America not only on an F-1 visa but also an O-1 visa. The difference is that O-1 visas are very difficult to secure and are given to those individuals “who possesses extraordinary ability in the sciences, arts, education, business, or athletics…. Extraordinary ability in the field of arts means distinction.  Distinction means a high level of achievement in the field of the arts evidenced by a degree of skill and recognition substantially above that ordinarily encountered to the extent that a person described as prominent is renowned, leading, or well-known in the field of arts.”

Furthermore, we published a catalogue for the exhibition so that every artist would have something that they could produce as further evidence of their contribution to this country when applying for a new visa status. The main catalogue essay was written by Jennifer Navva Milliken, now the former curator of craft at the Bellevue Arts Museum, who split her time between Israel and America.