A Conversation with Ursula Ilse-Neuman, Curator of “Space- Light -Structure: The Jewelry of Margaret De Patta” on view at the Museum of Arts and Design 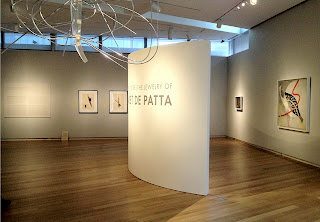 I heard a rumor about a year ago that the Museum of Arts and Design was going to have an exhibition dedicated to the work of Margaret De Patta. Since then I have held my breath in anticipation. I feel like I have a personal connection to De Patta, a West Coast native who is considered to be a pioneer in American studio jewelry, because I am lucky enough to own a pair of her earrings. I consider these earrings, purchased as a birthday present several years ago from Manhattan’s Primavera Gallery, my most prized possession.
The exhibition “Space- Light -Structure: The Jewelry of Margaret De Patta” opened at the Oakland Museum of California (a major repository for De Patta’s work) this past winter and most recently at the Museum of Arts and Design (on view through September 23, 2012). What I love about De Patta’s work is that it is complex in its execution but simple in its design. De Patta favored semi-precious stones which appear to be floating in air because the settings are almost invisible. De Patta, a student of Laszlo Moholy- Nagy, the Bauhaus instructor, adhered to the principles of Constructivism and applied them to her jewelry work. The exhibition traces De Patta’s career from the late 1930s to the early 1960s, when she took her own life, and consists of the artist’s custom commissions as well as her production pieces.
I first heard Ursula Ilse-Neuman, the exhibition’s curator, speak about it at SOFA this past spring and knew right away that it was going to be a highlight of my summer.While a full review of the exhibition will appear on the Art Jewelry Forum’s website, I wanted to publish on this blog a conversation that I had with Mrs. Ilse-Neuman.
1. I like that you began the exhibition with the work of Moholy-Nagy to show what an influence he was on De Patta and that you chose to show work on paper before jewelry, even though it is a jewelry exhibition.  How important was it for you to do this?
For me it was crucial to bring the Constructivist/Bauhaus ideas into play right at the beginning of the exhibition and so set the stage for De Patta’s work – without the much larger pieces by Moholy Nagy overshadowing the jewelry. The large and rare Kestnermappe prints you are referring to are relatively early works by Moholy Nagy which clearly define the design philosophy and aesthetics of Constructivism that De Patta embraced: Abstraction – the construction of a work with separate, non-figurative components  –  the interplay of light and space through the intersection of planes – thus creating inner luminosity and movement.
I believe the understanding of these principles enhances the enjoyment and appreciation of De Patta’s jewelry. De Patta considered her jewelry to be wearable sculptures – and, even though in a smaller format, her pieces should be considered on a par with other expressions in the visual arts.

2. A majority of the work in the exhibition comes from OMCA’s De Patta archive, how did you decide which pieces to include? Was there anything in the archive that was a discovery for you?

There are the De Patta archives at OMCA and the De Patta Estate in Point Richmond, administered by Martha Bielawski, the second wife of Margaret De Patta’s husband, Eugene Bielawski. Julie Muniz, the OMCA curator and I made the selection of the works.   I was a little more familiar with the Oakland Museum pieces but when I first visited the Estate, I was overwhelmed by the many photographs of and by De Patta, her photograms and artful greeting cards, her extensive personal correspondence, the actual travel diaries – the wonderful Ruth Asawa sculptural weaving, hanging right in Martha Bielawski’s living room, that De Patta had  received in exchange for one of her wonderful opticuts.  The Estate still owns a few of the most significant opticuts,which I was able to admire for the first time “in the flesh” after having seen them only on photographs.
3. Aside from the amazing jewelry, you chose to include De Patta’s designs for household objects, like flatware and salt and pepper shakers. Why was it important to you to show this side of her work?
Yes, I thought this was quite important – De Patta attended the Chicago Bauhaus where students were trained to adapt their design skills to any task they were presented with. She attended the Preliminary course (of which we show a film made in 1946),where the training included experience with the potential of many different materials and the stress was on functionality and ergonomics in addition to aesthetics.  In her ceramics as well as her flatware, De Patta put these Bauhaus teachings and experiments as a student to good use, as she did when she remodeled her own residences, designing both the light-filled interiors as well as the exteriors herself.

4. What are some of your favorite pieces in the show?

I have several favorites, chosen from various phases during her career: I love an early silver pin from the early 1930s in which she worked in an almost abstract, painterly style using a simple but ingenious method of shaping plain silver sheets and silver wire into modernist structures that look as fresh today as they were then.  I love her so-called “cathedral piece,” which includes a facetted clear quartz stone with fine rutilations, set architecturally into a delicate cantilevered white gold structure.  I am also very fond of her “sweater jewelry” in which she used the river and beach stones she loved to find, inventively making them appear to float on simple, boomerang-shaped silver armatures.  There are so many more pieces: ones in which she used fine wire mesh, or ones in which lens-cuts play with magnification and reduction of the texture and material on which the stones were placed.  Forgive me, but I am beginning to include more and more pieces and not just a few examples – each piece has been worked out to perfection.
5. What was, in your opinion, De Patta’s greatest contribution to jewelry design?
Her opticuts with their incredibly intricate faceting bringing out the interiors of the stones in so many new ways were certainly her legacy.  She is one of the most important exemplars for the younger generation as they strive to promote art jewelry’s unique role within the visual arts.But I believe she also set an example for any aspiring jewelry artist in her uncompromising rational and meticulous approach to creating what she believed in – bringing beautiful design into everyone’s life – a democratic ideal that she followed in her life as well as her art.

6. Since this show is coming to MAD from OMCA, what were the differences in the two shows?

Unfortunately, I only saw the OMCA exhibition through images.  I believe that there was a very understandable pride that De Patta was a Bay Area artist that influenced them to emphasize her biography a little more than I did here in New York.I have a long-standing interest in the Bauhaus, having curated an earlier exhibition on its Workshops, and was attracted to De Patta’s connection to the Chicago Bauhaus. I was very fortunate to have been granted the loans from various museum collections, notably the Guggenheim Museum here in New York, which made it possible to show De Patta in this larger context.

Rupert and I have collaborated on several other exhibitions many years ago when we were still on 53rd Street.  In fact our first show together was the “Bauhaus Workshops” exhibition I referred to earlier, which turned out exceptionally well and also garnered considerable praise.In another exhibition installation, a large, collaborative project with the MAK Frankfurt, Germany, Rupert designed several columns that incorporated LED lit sections for individual jewelry pieces.  This was a wonderful approach to showing jewelry, not in groups but as individual pieces to have their own presence.  This is what Rupert accomplished on an even more spectacular scale for De Patta.  Rupert is uniquely sensitive to good art and design and he understood De Patta from the get-go.  Actually we spoke about De Patta years ago – and last year I twisted his arm and he agreed to design the installation – for old times’ sake and for De Patta’s.  Rupert has a show of his own paintings coming up at the Nancy Hoffman Gallery here in New York in October and now he has to catch up to get his own work ready.  Please read Deese’s in-depth blog post about the installation on MAD’s website.
8. The Designs Contemporary section of the exhibition is very extensive. Do you feel that after seeing this show the market for De Patta’s work may change since one can still find pieces from the Designs Contemporary line on the secondary market.
I am sure that De Patta’s works will finally be competitively priced along the lines of other major historical jewelry artist’s prices. Yes, I believe the market for her production line, which by the way is of incredibly high quality, will be influenced by the show.  The world is waking up to De Patta.  Although her work was celebrated during her lifetime, she never reached the wider audience she sought and I hope the exhibition will reintroduce her wonderful pieces beyond the inner circle of knowledgeable collectors.  I also believe she would have appreciated being shown within the framework of her mentor, Moholy Nagy, who had proclaimed shortly before his own untimely death in the 1946, that this former Chicago Bauhaus student, Margaret De Patta, was the best jeweler in the country.
I am happy that the show and the catalogue resonate with jewelry connoisseurs as well as the uninitiated.