Auction season is approaching fast, before you know it all the big auction houses will be trying to get the most money for the most beautiful pieces that they can offer right now. While there is still a month or so before the Important 20th c. Decorative Arts auctions in New York at the biggies like Sotheby’s, Christie’s, Phillips and Heritage (I am careful to not leave them out because I hear there are planning on opening a New York office), auctions for the international offices of the above are already in full swing. In particular, I found the Christie’s sale, which took place today, to be the most interesting. I also observed that the sales were particularly full of early twentieth-century works. This is not really a surprise as contemporary design, which flooded the market and did very well at auction in better economic times, has lost its steam and is no longer a blue-chip buy. It has been speculated that serious collectors will go back to purchasing important works of art from the beginning of the century, and it seems that auction houses are now trying to cater to those collectors. Christie’s is also preparing for a major auction of Rene Lalique’s glass on November 12, 2009 in South Kensington, London.

Below are some of the highlights, for me, from the Christie’s London sale 7759. 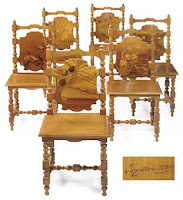 My breath was taken away by lot 20, a set of six amazingly beautiful chairs (1889) by Emile Gallé (1846-1904) made of cherry wood. The backs of each chair were inlaid with different designs such a pine cones, daffodils, fruiting holly, cornflowers, flowering plant with butterflies and a flowering branch with butterflies. The estimate was $48,840-$81,400 (translated into US dollars from British pounds) but the hammer came down at $129,019. According to the auction house, a chair of this design was part of the artist’s home in La Garenne, Nancy. Also, at least one of the chairs was exhibited in the Exposition Universelle of 1889. Gallé is most known for his glassware but these chairs exemplify his strong interest in furniture design and demonstrate that he was certainly a master in this medium as well. Although I have only seen these chairs in the catalogue, the marquetry work is incredible. The inspiration for the decoration for these chairs, obviously, came from nature. This is a theme that Gallé also explored in his glass and which was the major inspiration for the Art Nouveau movement of which he was a key figure. 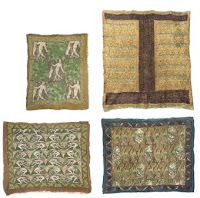 While these textile panels, lot 31, were not the most important pieces at the auction, I thought it was interesting to learn that the great dancer Isadora Duncan had a brother, Raymond (1874-1966), who designed textiles. The four panel textiles (ca. 1920) had an estimate of $4,884 – $8,140 and brought in $6,105. These textiles show that Duncan was also fascinated with the human form in motion, in which case he must have been a fan of his sister’s work, and, according to the auction catalogue, he designed classical Greek attire, which he and his family wore. They also asked that their guests remove modern clothes before entering their home and dress themselves in the Greek attire. Eccentricity ran in the family it seems. 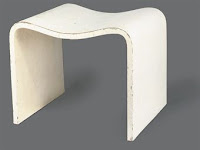 And finally, this lots was quite out of the ordinary. Lot 41is a modernist stool (ca. 1930) designed by the renowned British artist Francis Bacon (1909-1992). The stool was estimated at $24,420 – $32,560, and failed to sell. Few people may know that Bacon began his career as an interior decorator; this was an endeavor that he partook in until 1933 before turning to painting full-time. In the 1920’s he traveled extensively to Paris and Berlin to visit the studios of great designers such as Charlotte Perriand and also the students at the Bauhaus. Taken by the work of these designers, he brought back their ideas with him to Britain. The August 1930 issue of “The Studio” even featured an article about Bacon and his furniture designs titled “The 1930 Look in British Decoration.” This stool is the only remaining piece of furniture that Bacon designed.

Recently opened…
Sèvres Then And Now: Tradition and Innovation in Porcelain, 1750-2000
This is the first major exhibition dedicated to Sèvres in America and will present Sèvres porcelain from the 18th and 19th century alongside 20th and 21st century creations. This exhibition is at the Hillwood Museum, an estate which once belonged to Marjorie Merriweather Post, who was an avid art collector. The exhibition runs from October 20, 2009 – May 30, 2010.
For more info see: http://www.hillwoodmuseum.org/Exhibitions.html

Oh, and one more thing….
Design/Make/Show: Vladimir Kagan and Ralph Pucci in Conversation
Thursday, October 29 6:00–8:30 p.m.
Cooper Hewitt National Design Museum, 2 East 91st Street
Working closely with designers such as Vladimir Kagan, Ralph Pucci has brought to light unrealized furniture designs by the designer now being produced in an exclusive limited edition series. Following a conversation with Pucci and Kagan, a limited edition chair will be unveiled. Ralph Pucci’s book Show will be available for sale and signing.
Contact: cheducation@si.edu for more information.