A Little Bit of Paris Comes To New York

The Salon: Art+ Design, a new art and design fair, opened to the public yesterday afternoon at the Park Avenue Armory at 68th Street in New York. In a city that has no shortage of art fairs, and in fact one just closed at the Park Avenue Armory two weeks ago, it is difficult to stand out. However Sanford L. Smith & Associates LTD, the organizers of the Salon, have made a very strategic move by teaming up with the Syndicat National des Antiquaires (French National Union of Antique Dealers) to produce this new show. With only 53 dealers participating, and 50 percent of them French, this makes for a very interesting and unusual show. All of the French galleries are still coming down from their high of participating in the Biennale des Antiquaires (which the Syndicat has been organizing since 1962). I was very fortunate to be in Paris in September to attend the 26th edition which was held at the Grand Palais and designed by Karl Lagerfeld (see my original post from Paris here). But if you missed that show, this is your chance to catch-up. The show is very elegant and on exhibit is some of the best furniture, jewelry, and ceramics that I have ever seen. Of course the show is heavy on French decorative arts of the 1920s through the 1960s but it such a pleasure to see these museum-quality objects that you almost forgive the French for being so egocentric. 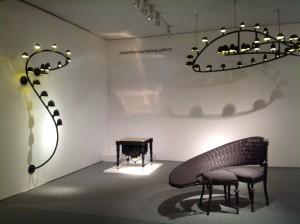 Carpenters Workshop Gallery showed some wild pieces from Studio Job, including a Taj Mahal Table (2012) in patinated and polished bronze in the back left corner and… 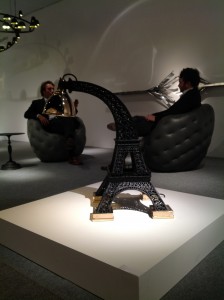 …this Eiffel Tower Floor Lamp also by Studio Job. Very appropriate for an art fair full of French dealers who are bringing a little bit of Paris to New York. 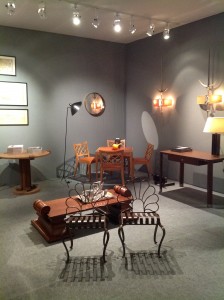 When I was in Paris, Galerie Chastel-Marechal was having an exhibition of the designer’s Jean-Charles Moreux’s work from the 1930s’. The twenty pieces on view were all very Surrealist in their design. The gallery brought this gorgeous pair of Moreux wrought-iron chairs (c. 1935). I adore the flower-shaped backs.

Galerie Downtown brought several of the same pieces from the Biennale to New York, including a rare staircase and shelving unit by Charlotte Perriand and Jean Prouve. 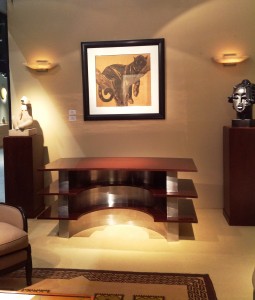 A Modernist Desk (1928) by Djo Bourgeois at Galerie Marcilhac. One of my favorite pieces at the show, this desk is made of brushed steel and wooden bakelite tops. Marcilhac also showed a fabulous desk by Michel Dufet at the Biennale in Paris. 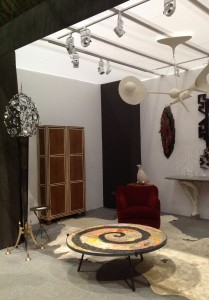 Alexandre Biaggi’s gallery was one of my favorite during my visit to Paris. Although they exhibit furniture and objects from some of the most important designers of the 20th century, they say that their emphasis is on “poetic and surreal world of the 1940’s.” This low-table in the center of the booth by Bonneti. While they do show important works, I find that these pieces are playful, quirky, and surreal.