A Praiseworthy Tribute to Serge Diaghilev 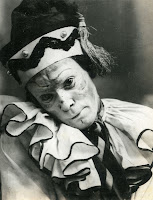 It is impossible to measure the amount of influence that the legendary Ballets Russes has had on the fine and performing arts since its inception one hundred years ago. It is no wonder then that institutions worldwide are honoring the Ballets Russes with exhibitions and performances on its centennial anniversary. Most recently, two remarkable exhibitions Diaghilev’s Theater of Marvels: The Ballet Russes and Its Aftermath (Donald and Mary Oenslager Gallery, The New York Public Library for the Performing Arts, June 26-September 13, 2009) and The Ballets Russes: Celebrating the Centennial, (Wadsworth Atheneum Museum of Art, Hartford, Connecticut, February 19 – June 21, 2009) paid tribute to the shining achievements of Serge Diaghilev (1872-1929) and his renowned ballet company.

What makes the materials (costumes, diaries, photographs, set designs and sketches of costumes) presented in these two exhibitions so valuable is that Diaghilev forbade his ballets to be captured on film, therefore these are the only remnants that we have available of this spectacles. While the Wadsworth Atheneum has objects that you would expect to see at such an exhibition, the New York Public Library for the Performing Arts displays some real, rare gems that will delight any connoisseur. All in all, the exhibition at the Wadsworth Atheneum can be considered an introduction to the Ballets Russes and the New York Public Library for the Performing Arts exhibition offers a more in-depth look at Diaghilev, the illustrious members of his Ballets Russes troupe, and their influences on other ballet companies during their reign and after the dissolution.

The Wadsworth Atheneum purchased costumes and set designs from Serge Lifar, Diaghilev’s protégé in 1933, (Lifar was in the United States on tour but poor ticket sales resulted in a financial disaster for Lifar, who needed to get his troupe back to France. He decided to sell his art collection for $10,000. to raise money), therefore the museum has amassed an incredible collection of Ballets Russes related memorabilia.

Cocteau’s poster for “Le Spectre de la Rose” (The Spirit of the Rose) of 1911 along with Léon Bakst’s costume design for Vaslav Nijinsky as the Rose in that production, perhaps one the most memorable of the early Ballets Russes costumes, graces the entrance of both of the exhibitions.
The work of Leon Bakst and Alexandre Benois dominate the exhibitions, as both men were responsible for the majority of Ballets Russes costume designs, but other costume designs featured are attributed to Picasso, Gontcharova, Larionov, Roerich, Matisse, and other significant artists like Derain and Roualt.

Both of the exhibitions were splendid but here are some highlights:

Wadsworth Atheneum:
-Amadeo Modigliani’s “Portrait of Léon Bakst” (1917)
-Preliminary Sketch for the Set of Le Tricorne (The Three-Cornered Hat), 1918 by Picasso
-Benois’ Costume Design for Petruschka (1920), of the clown on a stand, must have been a gift to Lifar, who danced the title role.
-Another outstanding work, although created after Diaghilev’s death, is by the Russian artist Pavel Tchelitchew of Lifar as Albrecht in Giselle. (This particular staging of Giselle was in 1932 but while Diaghilev was alive, Giselle was staged in 1910 and, then again, in 1924).
-Costumes, costumes, costumes!

Donald and Mary Oenslager Gallery, The New York Public Library for the Performing Arts:
-Boris Solotareff’s double portrait titled Stravinsky and Bakst (1918) shows two portraits of geniuses on one page.
-Portrait of Leonide Massine (1916), the portrait of Diaghilev’s protégé, by Larionov is very special because Larionov and his wife, the Gontcharova, helped the young dancer with his choreography, which came to reflect the cubofuturist art of his mentors.
-There are several works by Gontcharova but my favorite is the Spanish Woman, a beautiful pochoir from 1920, shows a woman hidden behind a lace veil.
-Benois’ “Tsarskoe selo v tsarstvovanie imperatritsy Elisavety Petrovny,” a rare book, illustrated by members of the World of Art circle, shows the group’s fascination with classical and rococo styles of the eighteenth century later seen in designs for costumes for “Le Pavillon d’Armide” (Armida’s Garden), 1909, the first of the Ballets Russes productions.
-The impresario kept extensive diaries of his ballet company’s performances. His earliest “Black Exercise Book” is from 1909 through 1911. This diary includes casts and programs for projected ballets and operas, lists of dancers, financial records, and budgets, as well as artistic plans for that season.
-The exhibition also spotlights Nijinsky. Two volumes of his diaries, from 1918 and 1919, along with his drawing, “Mask” (1919?), are on view. The ballet dance’s diaries have long been a subject of interest as they were written when he was suffering from a yet undiagnosed case of schizophrenia.
-Fabulous costumes by the Jeoffrey Ballet created for the ballet company which has paid tribute to Diaghilev and the Ballet Russes on several occasions.
-The journal “Illiustrirovannaia Rossiia / La Russie illustrée” (Illustrated Russia, no. 36 [225]) on August 31, 1929 featured a cover photograph of the gondola with Diaghilev’s bier moving through the canals of Venice. The headline reads: “End of a Beautiful Life.”