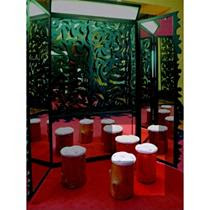 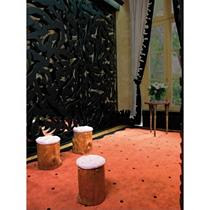 Next week, on May 26, Sotheby’s Paris will auction off furniture and decorative objects completed by Elizabeth Garouste and Mattia Bonetti for the French fashion designer Christian Lacroix’s maison de couture. Located on the Faubourg Saint Honore in Paris, and created in 1987, this salon was a testament to the artistic genius that is Christian Lacroix. Sadly, Lacroix was one of the victims of the harsh economy and filed for bankruptcy last May.

A former museum curator, Lacroix’s fashion shows were always the ones to watch. They were lively and theatrical exploding with beautiful, dramatic clothing that were a mixture of patterns and prints, often inspired by exotic cultures and full of historical references, and expertly constructed. Incredibly expensive, his clothing was unattainable to most but appreciated and revered by those who could boast that they owned a Lacroix original. The designer became known, in the late 1980’s, for the “pouf” skirt. This poufy mini-dress was the perfect ensemble for the ostentatious, and sometimes garish, 80’s fashions. 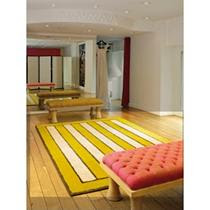 In a matter of three months the designer duo of Garouste and Bonetti were able to create designs for furniture and decorative objects that were just as whimsical and over-the-top as Lacroix’s creations. The maison du couture was a stage for these fanciful creations (the best couture houses were, think of the Art Deco masterpiece that was Paul Poiret’s salon or Coco Chanel’s famous Rue de Camb 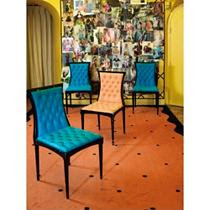 on address where models paraded down her grand staircase), as the catalogue stated “the idea was to showcase women.” Just like the clothing seen on runway, the showroom was a mix of textures and bright colors. Coral mixed with yellow and red accented with black. Linen covered tree trunk tabourets, rich velvet curtains, lacquered wrought iron chairs, and black painted and coral tinted wood cabinets ensured that no space was empty and no surface untouched. Although loud, the photographs in the catalogue suggest that the space was inviting and comfortable, a happy place to play dress-up. I can only imagine the feeling of stepping out of the dressing room and admiring yourself in front of the gilt mirrors. 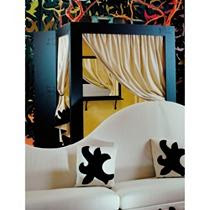 This project was certainly a gesamtkunstwerk, or a total work of art. The team was also responsible for creating the packaging, stationary, house logo, and party invitations for the first Lacroix fashion show. They were also in charge of designing some of his other shops worldwide. I also love that the catalogue includes- although not for sale- original sketches of the salon and furniture. Absolutely everything has to go- even the door handles are being auctioned off!

While I do not have my own maison du couture to furnish, the charm of these pieces can transform any plain old space into a wonderland. Who wouldn’t want to say that there closet came from the maison du couture of one of the greatest showman in fashion?