With “American Woman” the Costume Institute has, in contrast to the no frills “American High Style” exhibition at the Brooklyn Museum (from whose collection this exhibition is pulled from), created another spectacle. Yet in comparison to previous years, the exhibition is less theatrical and more elegant. The topic is more manageable and easier to understand although there is not much of a didactic tone; the curators allow the beauty of the clothes to speak for themselves. The mannequins are surrounded by fabulous thematic backdrops influenced by the decade and period music is blasting on the speakers. Like in previous years, the Costume Institute is allowed to delve into the rich decorative arts collection of the Metropolitan Museum to bring these murals to life with carefully placed objects. For example, a backdrop inspired by the home of Louis Comfort Tiffany is embellished by the use of original Tiffany furnishings and lamps. 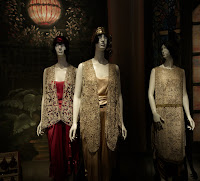 While past exhibition have revolved around ethereal creatures, such as superheroes and supermodels, real American women are at the heart this year. The focus is on a period of fifty years, from 1890-1940. Not only did the woman’s role in society change at this time but so did her wardrobe. This evolution is shown through a “succession of archetypes based on mass-media representations.” These archetypes include the Heiress and the Gibson Girl (1890s), the Bohemian (1900s), the Patriot and the Suffragist (1910s), the Flapper (1920s), and finally the Screen Star (1930s). But in the end, no matter what category this woman fit into, she would always remain an “American Woman.”
Even though the exhibition begins with the heiress, a woman who with the help of her family’s fortune is able to indulge in the very best and dress herself in House of Worth ball gowns, every decade going forward was a fashion revolution. The Gibson Girl was the first one to challenge the accepted notions of femininity and dress. She was not a real woman but the creation of illustrator Charles Dana Gibson that appeared in Life magazine in the mid-1980’s and according to Andrew Bolton, the curator of the exhibition, “her clothes reflected a modern, liberated femininity.” Not surprisingly this section has the most American designers represented, many of them unknown. The Gibson Girl avidly participated in sports and is depicted wearing bifurcated skirts that put comfort before style. The Bohemian came next. This woman was an arts lover who often hosted salons at her home and had the appropriate uniform for such events. Not afraid to wear loose-fitting, uncorseted clothing she favored dresses by Callot Soeurs, Paul Poiret (who is also represented in the BMA show) and Liberty & Company capes. She was an individual and like her taste in art, she preferred clothing that was original and inspired by antique patterns. The Patriot and the Suffragist fought for women’s equality. The Suffragist was not fashion forward in her style but she used fashion to advance her cause and to identify herself as part of a larger group of woman. American women showed that they supported the Suffragists actions by appropriating her colors -gold, or the tricolors purple, white, and green (and later, purple, white and gold).
Once the Suffragists had done their job and women were given the right to vote on August 18, 1920, the American woman embraced her sexuality and a moral, not political, revolution became her main concern. “The flapper marked the ultimate rejection of Victorian prohibitions against sexual expression.” She was defined by new, slightly androgynous silhouette in a short-skirted chemise dress. This came to be the definitive look for the modern woman: “the flapper was as much a symbol of sleek modernity as the skyscrapers rising around her.” This gallery is the certainly the most dazzling in the show, with a backdrop inspired by the paintings of Tamara de Lempicka and clothes by Jean Patou, Jeanne Lanvin, and Edward Molyneux, flappers certainly had the most fun! The flapper’s lifestyle provided many intrigues and she soon became a muse for the silver screen. This brings us to the last decade of the exhibition: the 1930’s. Considered to be the “Golden Age of Hollywood” the screen sirens were more mature, womanly, and sensuous, in comparison to the flapper, and their wardrobes were decidedly more glamorous. This gallery would not be complete without a jaw-dropping ensemble, and we have it in the way of Travis Banton’s black evening gown with a dazzling dragon motif, in silver and gold sequins, as worn by Anna May Wong in the film Limehouse Blues (1934). Classically-inspired dresses by Madame Grès and Madeleine Vionnet, both who “used draping, twisting, and wrapping to enhance the natural figure” came to define glamour for the American woman, and women world-wide, in the 1930’s. According to Bolton, “the two models of style and beauty that have continued to characterize the American woman to this day are the slim, athletic, youthful flapper and the sleek, sensual, glamorous screens siren.
We are reminded in the last gallery by a video montage of American film stars, athletes, and politicians superimposed on the white gallery walls, that this exhibition is not a celebration of American fashion but of the American woman. In fact, there are few American designers featured in the show. Since these two exhibitions are based on donations made by wealthy patrons, it is assumed that these women had the means to travel the world and visit the best couturiers. In the Heiress section this is best pronounced by Charles Frederick Worth, the first couturier, who famously said, about his American clients, “They have faith, figures, and francs- faith to believe in me, figures that I can put into shape, francs to pay my bills.”
Images: Bohemian Gallery, Installation Image, Callot Soeurs. “American Woman: Fashioning A National Identity” at the Costume Institute of the Metropolitan Museum of Art; Flapper Gallery View, Installation Image, Anonymous French Designer (1925) and Anonymous American Designer (1926). “American Woman: Fashioning A National Identity” at the Costume Institute of the Metropolitan Museum of Art; Screen Siren Gallery View-Jessie Franklin Turner (1933), Chanel(1934),Travis Banton(1934). “American Woman: Fashioning A National Identity” at the Costume Institute of the Metropolitan Museum of Art. All courtesy of the Costume Institute of the Metropolitan Museum of Art.