An “Out of this World” Interview with Curator Elyse Zorn Karlin 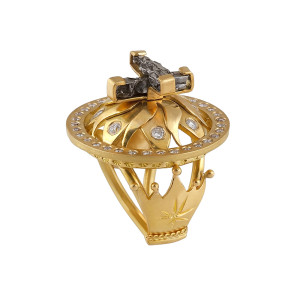 The Love that Moves the Sun & the Other Stars Ring , Donna Distefano, American & Italian, 22k gold, meteorite, diamond. Courtesy of the artist. 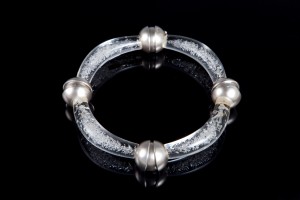 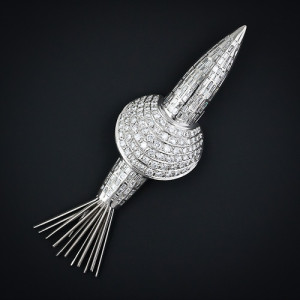 A terrific exhibition opened at the Forbes Galleries in New York several weeks ago, titled “Out of this World: Jewelry in the Space Age“, it examines how space exploration has influenced the design of both fine and non-precious jewelry.

I recently sat down with Elyse Zorn Karlin, the exhibition’s curator, to chat about this fascinating topic.

Since the exhibition starts with the Late Georgian and Victorian eras, the earliest examples we have in our exhibition are circa 1835 Halley’s comet brooches which were very popular around the time the comet returned.

Although it’s one of the smallest pieces in the exhibition, the cross made from Palladot (pallasite) is amazing because this is peridot which is found in meteorites. It is rare and only found in very small pieces.

I guess I would have to say the late 1950s and 1960s when we entered the space race with Russia. And it continued on right through the 80s and it seems to be alive and well today in more abstract visions of space seen in contemporary jewelry. Some of the artists in our exhibition work almost exclusively with materials from space or with space-related themes. 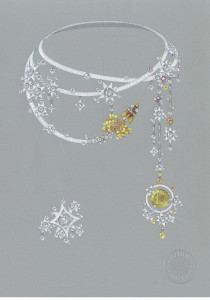 The TAMPA necklace, created in 2010 by the renowned firm of Van Cleef & Arpels, is set in white and yellow gold with round, baguette and rose-cut diamonds, round pink, purple and yellow sapphires, rose-cut blue sapphires, an onyx motif, round orange garnets, round red spinels and a round beryl.

This necklace is part of the LES VOYAGES EXTRAORDINAIRESTM High Jewelry collection. The necklace was inspired by the Jules Verne novel From the Earth to the Moon first published in 1865. The book tells the story of the president of a Baltimore gun club and his rival, a Philadelphia maker of armor, and a Frenchman, who build an enormous sky-facing space gun and launch themselves in a spaceship from it to land on the moon.

It is now in a private collection but was not a commission. The pieces in the entire collection are absolutely amazing!

Besides the fact that this necklace is so beautiful, it also has detachable pendants so it can be configured many different ways. And it amazes me that Jules Verne was writing about rockets to the moon in the 19th century! I believe the name Tampa is because in the book they launched from Tampa, Florida which also presages Cape Canaveral!!! 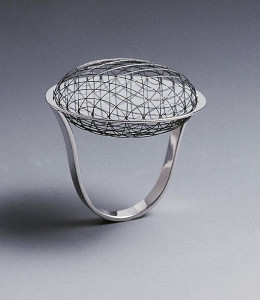 Perhaps that two most popular materials that have been used to make jewelry that were used in spacecrafts are Polymer and Titanium. Polymers are a large class of materials based on carbon chemistry. They possess long chain structures and unique molecular architecture that make them different from metals and ceramics, and give them a wide range of properties. Polymers can be modified by adding other filler materials to provide an endless range of possible usages. Polymeric materials are widely used for many spacecraft components including adhesives, circuit boards, temperature regulating “blankets,” lubricants, electrical insulation, paints, and high stiffness composites.

Polymer clay is a sculpting medium used by artists. It is soft and can be easily shaped into highly inventive forms, take image transfers, and be mixed with other materials. It is then heat hardened. Polymer jewelry has in recent years been recognized as an important oeuvre.

Titanium. Titanium is a chemical element with two very special properties: it resists corrosion and it has the highest strength-to-weight ratio of any metal. When mixed with other elements it forms a strong lightweight alloy that resists cracks and fatigue and retains its strength at high temperatures. It therefore is used in jet engines, missiles, spacecraft, and other aerospace applications. Titanium is found in meteorites and has been detected in certain types of stars, including our Sun.

Jewelers like titanium for its durability and because of its reactive properties. By reacting to electrical current or heat it develops an oxide layer that appears brightly colored. But the colors are an illusion, formed by interference between light reflected from the oxide surface layer and light reflected from the metal surface beneath. Titanium is also non-allergenic which is desirable for jewelry.

Out of this World: Jewelry in the Space Age, March 16 – September 7, 2013, at the Jewelry Gallery, The Forbes Galleries, 62 Fifth Avenue, at the corner of Fifth Avenue and 12th Street, in New York City.

Elyse Karlin is the co-director at the The Association for the Study of Jewelry and Related Arts, LLC (ASJRA). This is an organization dedicated to the advancement of jewelry studies by individuals and in schools, museums, and institutions of higher learning. ASJRA takes a broad approach to the subject, seeking to understand and place jewelry within a variety of contexts including the decorative arts and fashion. It focuses on all jewelry periods from the ancient past to antique to period jewels and the work of present day studio artists.AJSRA publishes Adornment Magazine, a weekly newsletter, runs an annual fall event, numerous additional special events, and offers a number of other benefits. Membership is open to anyone who is interested in studying the history of jewelry.