Another Year, Another Fabulous Armory Show

As usual, there were a lot of beautiful and eye-catching items brought by each gallery. Most dealers start thinking of the following year’s booth way in advance of the show itself. They hunt for things that will distinguish them from their peers and it is no easy task. Most dealers will tell you that it becomes incredibly difficult with each year to find the very best in their particular field and, when they do, they must pay record prices. Below is my list of the must-haves. Perhaps these weren’t the most expensive or most unusual, although in some cases the objects do have an incredible provenance, but just items that I found to be just right. Feel free to contact each gallery for more information.

A Viennese Secessionist Giltwood Mirror by Dagobert Peche, circa 1922 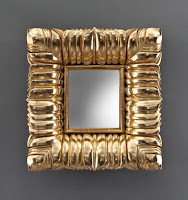 Peche, who joined the Wiener Werkstätte in 1915, was responsible for some of the most whimsical and striking designs that the Workshops, founded by Josef Hoffmann and Koloman Moser in 1903, had to offer. He designed everything from textiles, to jewelry, to porcelain, to decorative objects and furniture. It is easy to tell when it is Peche’s hand that is responsible for the design because his fancy ornamental creations are in absolute opposition to Hoffmann’s geometric designs. Peche designed a whole series of giltwood mirrors frames, the Neue Galerie New York has a beautiful collection and this particular mirror, being offered by H.M. Luther Antiques, is illustrated in the “Dagobert Peche and the Wiener Werkstätte” exhibition catalogue which was published by the museum in 2002. The mirror’s frame is designed to resemble overlapping stylized leaves and was made by Max Welz. The model number “WW19” is printed on a paper label attached to the back. 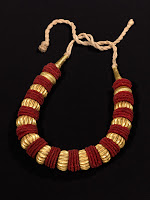 I love jewelry. I am exposed to it every day at the gallery where I work. I have my own small collection of pieces that I love and cherish. I would even consider myself somewhat of a connoisseur. And yet I know nothing about jewelry made outside of Europe or America. Therefore I was surprised to discover that this incredibly modern necklace was comes from the Kathmandu region in Nepal. It is made of 24KT gold beads interspersed with red fabric, resembling velvet, and strung on a cotton thread. The design of this necklace is so simple yet it is so elegant. When worn it is regal and commands attention because of its size. This piece is just one of the many beautiful objects of African and Oceanic origin that Maureen Zarember of Tambaran Gallery brought with her to the show.

Table for Calling Cars by Gorham, 1883 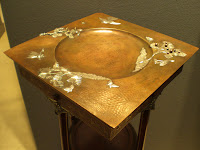 I fell in love with this table the moment that I saw it. And once Eric Silver, who co-owns Lillian Nassau Gallery with Arlie Sulka, told me its history, I loved it even more. Founded in 1831, Gorham is one of the most celebrated, and oldest, American firms specializing in silver-ware. This table, which was used for calling cards (in the days when people would visit your home and leave a calling card if you were unavailable), is one of three known examples of furniture ever produced by Gorham. The other pieces are at RISD and Dallas Museum of Fine Arts.  Stylistically it is in- keeping with the Aesthetics Movement and was influenced by Japanese art in its motifs of nature such as the lily pads, dragonflies, pine cones, and butterflies. These decorative elements are made of mixed metals- copper inset with silver- and applied to wood.  Interestingly enough, documents relating to this table are located in the Gorham archives. What they tell us is that it took 40 hours to complete the hammering of the silver and 20 more hours to apply it. The total cost to produce this piece (including the cost of the materials used) was $145.42 and it retailed for $300. That is almost a 50% mark-up. Although I do not know what Lillian Nassau is asking for this piece today, I am sure that it is almost 100 times more!! 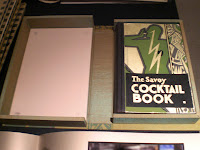 The Savoy Cocktail Book was published by London’s Savoy Hotel in 1930 and includes the cocktail recipes of Harry Cradock of the American Bar, which was located at the Savoy. Cradock left American and moved to London during the Prohibition and become one of the hotel’s barmen. The American Bar actually opened in 1898 and was the first to serve cocktails in Europe. Cradock was responsible for the invention of some cocktails that we consider classics today including, according to some sources, the dry martini. While the Savoy Cocktail Book has been reprinted numerous times since its original date of publication, Potterton Books has the original. The book also comes in its original box.

The shop has an amazing collection of rare and out of print books and exhibition catalogues. Aside from the Savoy Cocktail Book, I also drooled over a rare Elsa Schiaparelli calendar from 1966, which the designer likely gave out as a souvenir in her boutique, and Cecil Beaton’s Complete Diaries. The shop has the complete set, covering the years 1922-19 tied together prettily with an Hermes ribbon. 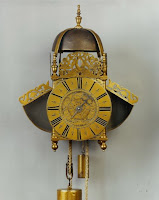 I do not know anything about wall clocks other than I need one in the kitchen so that I am not late to work in the morning-but the tick-tocking and the cuckooing of these clocks immediately attracted my attention.  But if one ever finds themselves in the position to buy a clock, be it a wall clock or a Grandfather clock (also known as a longcase clock) with history and personality then they should buy it from Raffety& Walwyn Ltd.  an English gallery which specializes in antiqye English clocks, barometers, and furniture. The clock that struck my fancy was the Thomas Wheeler “Near Ye French Church” lantern clock. This clock is from the James II, or late 17th century, and is called a “winged” (notice the sides) lantern clock.  According to the gallery’s owners, Wheeler was a celebrated watch-maker. The case and the dial center as well as the alarm disc are all engraved with flowers. The verge movement has a centrally mounted ‘anchor’ pendulum which strikes the hours on the bell.

Side note: A La Vieille Russie (ALVR) who is celebrating its 90th anniversary covered their booth in panels tracking its gallery’s illustrious history from Kiev to Paris and finally to its New York home on Fifth Avenue. The gallery is now operated by Peter Schaffer, the grandson of Alexander Schaffer, who opened the New York location in 1941, and his nephew Dr. Mark Schaffer. The booth’s design was just a taste of what visitors to the Didier Aaron Gallery saw in Paris earlier this fall when they staged their retrospective there. The New York version of this exhibition will be opening at the end of this month. And of course, while the panels got my attention, the real focus was on the royal jewels which the ALVR so marvelously displayed in their glass jewelry cases.