Beautiful Women Never Go Out of Fashion: The Rise of the Model

The “Model as Muse: Embodying Fashion” exhibition (May 6-August 9, 2009) at the Metropolitan Museum of Art’s Costume Institute is one great, big theatrical production. As per the request of Marc Jacobs, the exhibition’s sponsor, the galleries are fun and alive. This chronological exhibition takes us through the history of the model. The mood of the galleries shifts with each decade: the 1940s and 1950s are the classiest, the 1960s and 1970s are a colorful explosion, vibrant and experimental and 1980s and 1990s are a cool and edgy party. Music is playing on the loud speakers and beautiful women are looking down at you from the multi-colored walls and glossy pages of magazines. While the curators have crammed the galleries with loads of important fashion photographs (some brought to life), breathtaking clothes and a survey of fashion history (from 1947 to the 1990s) with biographies of the famous models that represented each decade, this exhibition is pure entertainment.

The exhibition opens with a re-creation of the famous photograph, “Dovima and Elephants,” shot by Richard Avdeon for Harper’s Bazaar at the Cirque d’Hiver in August of 1955. The model Dovima is wearing a black satin dress designed by Christian Dior and his then assistant Yves Saint Laurent. Life-size elephants flank the lithe Dovima on both sides; her theatrical pose accentuates the beauty of the dress and allows us to forget that she isn’t the only gorgeous creature in this photograph. With this introduction we become aware that models have played an equally important role, along with the designer and photographer, in creating a fashion fantasy.

Designers and photographers always had their “favorite girls”, according to Kohle Yohannan, co-curator of the exhibition (along with Harold Koda), but it was not until the 1920s that the fashion model “began to emerge as a fully formed social and professional entity.” It was only in the beginning of the twentieth-century when Marion Morehouse became the muse of Edward Steichen, chief photographer at Vogue, that the reader started to become familiar with the woman in front of the camera. But following World War II (and more specifically with Dior’s New Look) models started to serve the role of “cultural muses” which extended into the 1980s and 1990s when models became ambassadors of cosmetic and clothing brands and needed to be recognizable. Starting with the mid-1940s, each gallery is glimpse back in model (and fashion) history. Famous photographs have been turned into beautiful vignettes such as Cecil Beaton’s “Dorian Leigh and Unidentified Models” (Vogue, June 1948). Projected on the gallery screens, is the film “Funny Face” (1957), in which Fred Astaire’s character, loosely based on Avedon, finds his muse in a young Audrey Hepburn. This film was proof that the age of the elegant and sophisticated model was coming to an end. The “youthquake” shook things up in the 1960s. Twiggy, Jean Shrimpton, Verushcka, Penelope Tree, and Marisa Berenson were the complete opposite of their predecessors. While models in the last decade were recognized, these women captured a following similar to the Beatles, especially Twiggy (Life magazine’s “Face of 1967”). The gallery evokes the vibrant and youthful decade by displaying the iconic dresses featured in William Klein’s “Qui etes vous, Polly Maggoo?”, Yves Saint Laurent’s African-inspired collection (Spring/Summer 1967), worn by the willowy Twiggy, as well as the futuristic fashion of André Courrèges and Paco Rabanne. The Sixties was also a decade of a sexual revolution and designers pushed the boundaries of what was acceptable. One of the most famous garments and photographs of the period was of Peggy Moffitt in a Rudi Gernreich “Topless Bathingsuit” photographed by her husband, William Claxton (Life, July 10, 1964).

The 1970s focus on the athletic body changed our perception of what type of woman is beautiful. The annual Sports Illustrated Swimsuit Issue became a barometer for what was considered sexy. Models with sun-tanned, long legged bodies ruled the glossies, which is no surprise since American sportswear was also becoming increasingly popular. Famous blondes such as Lauren Hutton, Christie Brinkley, Cheryl Tiegs, Patti Hansen and Lisa Taylor began to dominate magazine fashion spreads. Photographers such as Guy Bourdin, Helmut Newton and Chris Von Wangenheim captured the models’ raw sexuality who were wearing ensembles by Halston and Yves Saint Laurent. The late 1980s ushered in the era of the “Supermodel” with Linda Evangelista unforgettably telling Vogue magazine, in 1990, that neither she nor fellow supermodel, Christy Turlington “wake up for less than $10,000 a day.” This group of highly paid and widely recognized women included 14 models but the most recognized are “the Trinity” which consisted of Evangelista, Turlington, and Naomi Campbell. Reminiscent of the group photographs of the early 1950s, these models often posed together (and most famously in George Michael’s Freedom 90 music video). One of the most iconic images from that period is Peter Lindbergh’s of Helena Christensen, Stephanie Seymour, Karen Mulder, Campbell, Claudia Schiffer and Cindy Crawford wearing biker jackets with ball gowns by Karl Lagerfeld for Chanel (Vogue, September 1991). This was followed by an anti-fashion sentiment in the early 1990s which provoked the rise of grunge and Kate Moss. The industry also became more acceptable and models of all ages and sizes entered the arena. However, this did not last long: we now again celebrate the glamour in fashion and models are often cast to resemble the beauties of the 1940s and 1950s.

Towards the end, and this is the downfall of the exhibition, the viewer is inundated with too many names and faces. Will these women who have been immortalized today be remembered tomorrow? The exhibition catalogue, written mostly by Yohannan, places the core of the exhibition in an academic context, and selects key photographs of the decade by providing us with behind-the-scenes insight. The models biographies point out that most of these women were more than just a pretty face. What made the models memorable is that they all had distinctive identities. Furthermore, they revolutionized fashion not just with their look but with their business acumen. When Yves Saint Laurent famously said, “a good model can advance fashion by ten years” he meant it. At the end of it all, what is an artist without his muse? 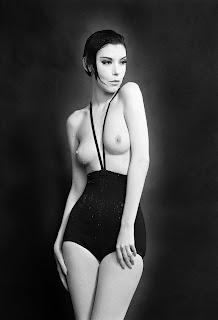