It is interesting how some artists get attention in waves. You may not see anything written or exhibited for a long time and then monographs and exhibitions turn up everywhere you look. Such has been the recent case with Alexander Calder. In the past few months, three exhibitions have opened focusing on different aspects of this master’s work. It appears that this blitz was carefully orchestrated with the help of the Calder Foundation.

During the first week in November two of Manhattan’s Upper East Side galleries opened their shows: “Calder Shadows” at Venus Over Manhattan and “Show and Tell: Calder Jewelry and Mobiles” at Salon 94 proved to be two of the most interesting gallery exhibitions that I have seen in a long time. Venus Over Manhattan exhibited twelve of Calder’s mobiles in the dark and lit each one in such a way that their shadows were reflected on the white walls behind them. Each mobile’s reflection was twice the size of the original work making for a wonderful theatrical effect. The gallery describes these mobiles as “dancing along the walls, ceiling, and floor of the gallery” and dance they did. Seeing this work in a new light was a revelatory experience even for Calder’s most loyal followers. 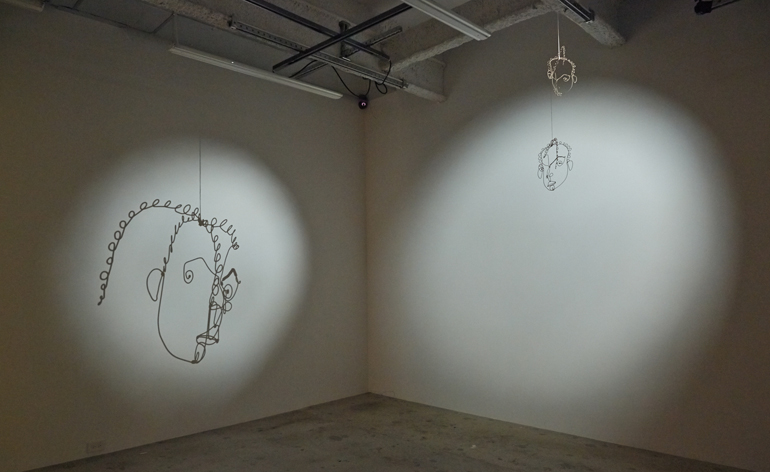 A completely different experience awaited Calder enthusiasts some twenty blocks away at Salon 94. Forty pieces of Calder’s jewelry, presented in such breadth only in the Metropolitan Museum’s “Calder Jewelry” show in 2008, were displayed on a mid-century Carlo Mollino maple book case as well as on sculptures that were commissioned specifically for this exhibition. Although the contemporary sculptures were also fascinating, the most fabulous of the “displays” were two masks that Calder himself created for a 1940 one-man show at Marian Willard Gallery in New York.  Salon 94 invited contemporary artists such as Huma Bhabha, Hope Atherton, Martin Boyce and Matthew Day Jackson to create new work inspired by Calder that would serve as the displays for the jewelry. However even with these new sculptures it was Calder’s iconic pieces, such as “A bas la Mediterranean” (c. 1937) silver wire earrings that spelled out this long title or the brass “Crown of leaves” (c. 1940), that really stole the show. Several photographs by art world favorite Mickalene Thomas, who adorned her muscular male models in Calder’s jewelry, hung on the walls.

Although I must say that my favorite piece, and what I believe to be the most significant work in the show, the voluptuous brass “Harps and Heart (necklace)” (c. 1937), was hidden in the gallery director’s office and displayed on a ordinary black velvet neck form. 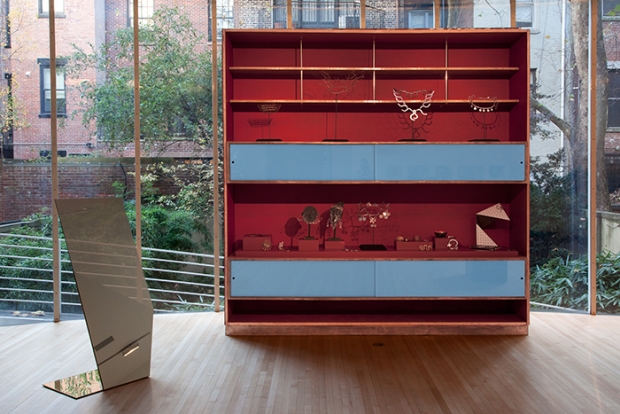 The other exhibition, Calder and Abstraction: From Avant-Garde to Iconic “explores the artist’s radical translation of French Surrealist vocabulary into American vernacular.” Unfortunately I have not had the chance to see it as it is taking place at the Los Angeles County Museum of Art. I was surprised to learn that this the first Calder museum exhibition in Los Angeles, however the museum commissioned Three Quintains (Hello Girls) from Calder for its opening in 1965. To honor Calder and this exhibition, the installation was designed by architect Frank O. Gehry.

But perhaps the biggest coup for the Calder Foundation was one that they did not stage. Also in November, Sotheby’s New York hosted the sale of the Makler Family Collection of Alexander Calder Jewelry. Hope Makler (1924-2013) was a loyal client for over two decades but became Calder’s dealer in Philadelphia when she opened her namesake gallery in 1960. The auction featured eighteen pieces of Calder’s jewelry; a wide range of work that including spiral necklaces, hammered silver bracelet, brooches with found objects, a pair of charming fish earrings, an African-inspired necklaces, and a drop-dead gorgeous flowers and leaves necklaces. The only thing more stunning than the work is the prices. A magnificent silver necklaces of unraveling swirls (Lot 101) sold for $1,985,000. well over its $400,000-$600,000. estimate. This necklace was originally in the collection of Klaus Perls, who owned Perls Galleries in New York, and who also represented Calder. 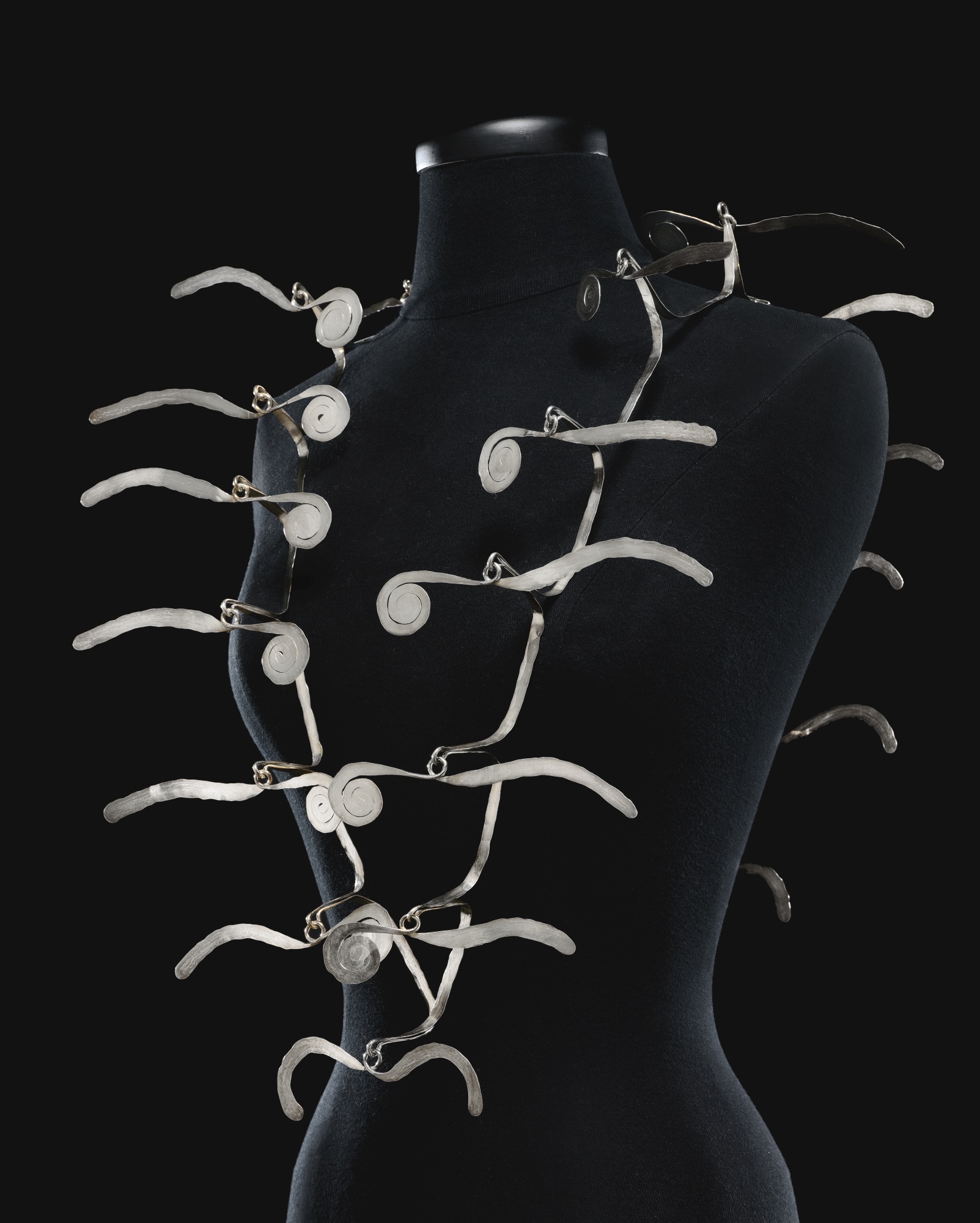 “The grand silver Necklace (lot 101) which is the centerpiece of the collection is just as abstract, innovative, three-dimensional and kinetic as Calder’s sculptures, and just as strong a statement of Calder’s genius for line and balance as any hanging mobile.” 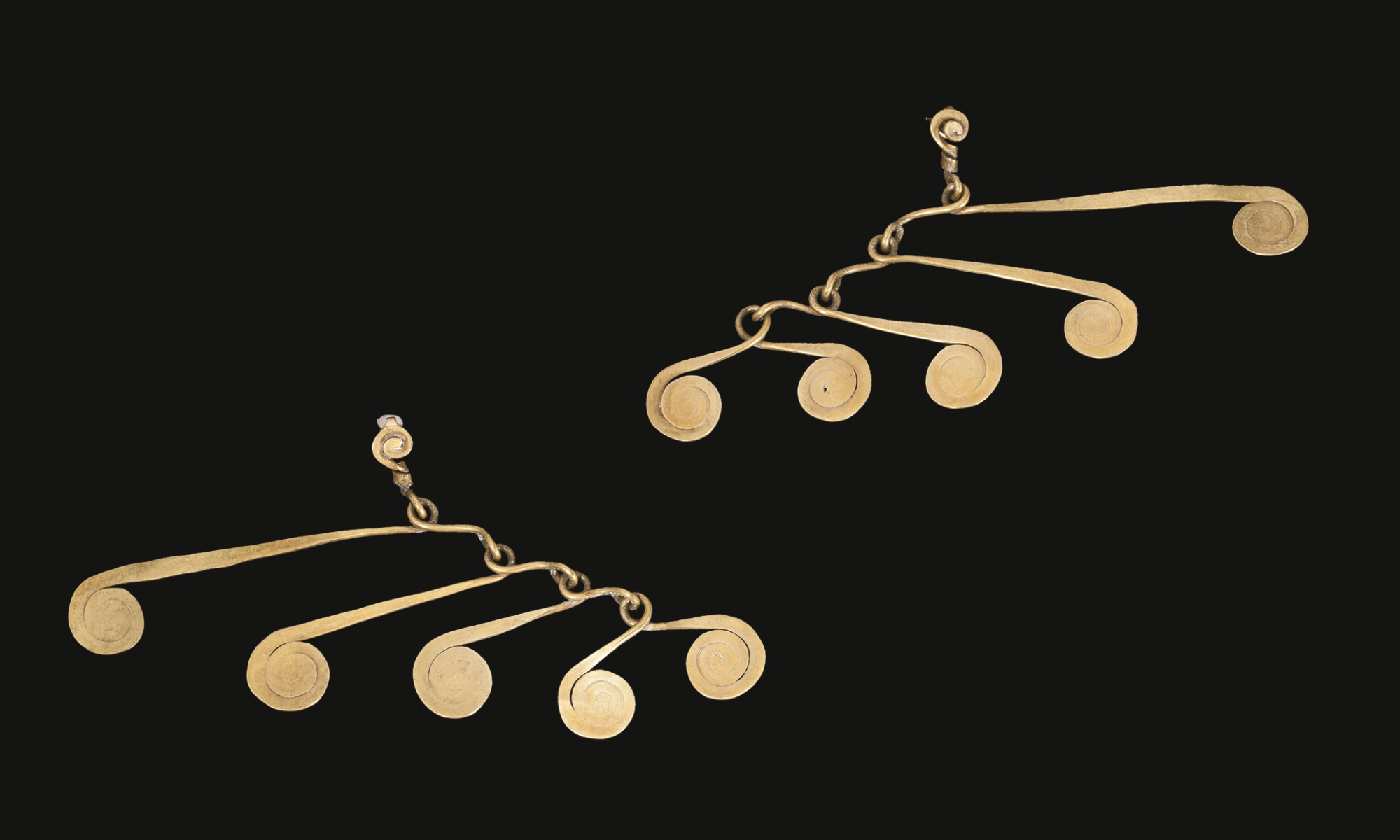 A similar pair of earrings (as lot 102) but in silver was also included in the Salon 94 exhibition. If hung close to the ceiling these earrings, which could easily pass for Calder mobiles, sold for $1,055,000.

Interestingly, some of the jewelry in the Salon 94 exhibition was for sale and when a friend visited the show a couple of days prior to its closing noted that a lot of the pieces were missing and the sculptures that served as their display were barren. She was told by the gallery’s director that most of the work had been sold. Clearly the Sotheby’s sale worked in their favor. Although when I saw the show and spoke with the same director, I was told that the sale did not really increase the show’s attendance. Somehow I think that he is mistaken.