“American Woman: Fashioning A National Identity” at the Costume Institute of the Metropolitan Museum of Art (May 5- August 15, 2010) and “American High Style: Fashioning a National Collection” at the Brooklyn Museum of Art (May 7- August 1, 2010) are two separate exhibitions with the same goal: to celebrate fashion and women. They both effectively show that when it came to dressing themselves, American women were not afraid of experimenting and often used their wardrobe as a tool for communicating their, changing, roles in society.

“American Woman” and “American High Style” are two incredibly different shows yet they are both based on the costume collection of the Brooklyn Museum of Art (BMA). In January 2009 the BMA entered into a collection sharing partnership with the Costume Institute and transferred 23,500 pieces to them, thus the Brooklyn Museum Costume Collection was born.

“American High Style” is a celebration of the designers and patrons that made the BMA one of the most important centers for the study and preservation of fashion design beginning in the early part of the twentieth-century. A critical moment in the museum’s history occurred in 1948 when the Edward C. Blum Design Lab was founded. Its goal, according to Jan Glier Reeder, the exhibition curator, was to “create a link between the art world and the industrial and design communities.” The founding of this center prompted designers, such as Charles James, and wealthy donors, like Austine Hearst and Millicent Rogers, to donate their couture ensembles to the museum. Therefore much of what is on view is the result of the hard work invested into the Lab by museum curators and researchers whose contact with the designers would result in numerous significant donations.
Perched up on birch pedestals, with white walls as their backdrop and subdued music on the loudspeaker, the exhibition opens with four highlights from the museum’s collection: Bonnie Cashin’s cherry pink evening dress (1945), Charles Frederick Worth’s navy blue “walking” dress (1885), Charles James’s sculptural red “Tree” ball gown (1955), and Norman Norell’s luxurious gold organdy pant ensemble (1970-1971). These garments were chosen because they represent a range of what is to come: innovative styles from America’s best sportswear designers, exemplary nineteenth-century dresses, as well as couture and ready-to-wear creations from French and American masters. The breadth of this collection is astounding and treasures, or “Rarities’ as the museum refers to them are plentiful (these are miscellaneous objects from the 1600’s- 1960’s and include miniature fashion mannequins or dolls dressed by some of the most prominent French designers; a black dress worn (1894) by Queen Victoria in a royal family photograph; headdresses, dolls and textiles of Russian origin from the eighteenth and nineteenth- century; and costumes from “Gone With the Wind” and “The Barefoot Contessa”, amongst other things). 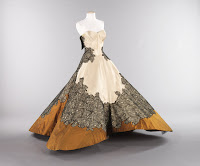 Homage is paid to couture giants like Charles James and one of his famous clients, the heiress Millicent Rogers. James had a long history with the Brooklyn Museum because of its reputation and left over two hundred pieces (and six hundred related materials including original sketches) to the institution and persuaded his clients to leave their James creations as well. Each garment by James in the exhibition is a masterpiece. Historical forms, like the one that inspired the “Four Leaf Clover” Ball Gown (1953) were revitalized by the addition of complex understructures and original approach to mixing fabrics and patterns. 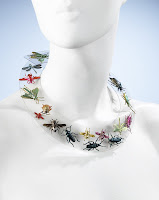 The exhibition does not forget the importance of female designers, while there was, and is, a greater number of male designers- this is not a man’s world. Elsa Schiaparelli’s wonderfully whimsical creations take center stage. Two hundred and fifty pieces by Schiaparelli are part of the collection. While the exhibition only presents a handful of pieces, a “Butterfly” patterned evening dress and parasol (from her Summer 1937 collection, the butterfly was the designer’s favorite motif because it symbolized transformation) remind us why this amazing designer was not only one of the most interesting but why Salvador Dali and other Surrealist artists often collaborated with her. The clothing of other pioneer female designers such as Claire McCardell (one of the most important American designers, she is heralded for her sportswear creations and putting the pants on American women), Elizabeth Hawes, Jessie Franklin Turner, Valentina Schlee, Bonnie Cashin, Carolyn Schnurer, Vera Maxwell and Eta Hentz is also included. These women represent the most prominent female designers working in America between the two World Wars.

The show also focuses on accessories- and there are enough goodies here to constitute a separate exhibition. Sumptuous handmade evening footwear by Pietro Yantorny (the most expensive and exclusive French shoe-maker from the early 1900’s), magnificent avant-garde shoe prototypes and sketches (from 1939) by Steven Arpad, a French designer who worked for Balenciaga and Delman, and incredibly elaborate hats donated by the milliner Sally Victor, including one designed for Mrs. Dwight D. Eisenhower, line the walls.

Next week…a review of the Costume Institute show