Listen to me closely when I say that the design hype is a thing of the past. Why am I so sure of this? Well, just look at the offerings at the upcoming 20th c. Decorative Arts and Design Auctions. Christie’s sale is occurring today with the Sotheby’s auction to follow next week. The Christie’s catalogue is full of beautiful Art Nouveau and Art Deco furniture and objects. But I assume that the auction house is banking on two pieces in particular: and incredible Carlo Mollino ebonized wood and glass occasional table (Lot 244; ca. 1949-1950) and a fabulous Jean Dupas oil on paper collage on canvas, titled “La Femme à L’Ara” (Lot 205; 1921). 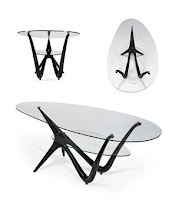 The Mollino table, estimated at $250,000-$350,000 has been in the collection of the seller since it was first exhibited at the Galerie Denys Bosselet in Paris in 1984. This is an important piece not only because it is unique but also because, the previous owner was Mollino himself. This table was designed as a prototype to a series of occasional tables that were produced by an American retailer in the early 1950’s. It remains to be seen if this table does as well as the Arabesque occasional table, from the same time period, which sold at Christies last year for $1,314,500.

You may recall that I had mentioned that at the International Fine Art and Antiques Dealers Show, which took place in October, Primavera Gallery of New York had a wonderful drawing by Jean Dupas titled “La Danse.” This drawing was a study for a larger work, “Le Pigeons Blanc” (1922) that had been lost. The compos

ition of this current painting, really a preparatory painting for a mural that was commissioned for the home of the Bordeaux industrialist (Dupas was born in Bordeaux and is associated with the school of Bordeaux) Henri Frugès (1879-1974), is very similar to that of “Le Pigeons Blanc.” This current work is incredibly bold and beautiful, with fantastical representations of animals and female figures in a garden. From what I know of “La Danse” and “Le Pigeons Blanc”, this work by Dupas was done right after “La Danse” and prior to “Le Pigeons Blanc.” While it was only several years later (in 1925) that Dupas exhibited his monumental “Les Perruches” at the 1925 Paris Exposition, this work already has all of the characteristic attributes of Dupas’s unmistakable modern style. “Le Pigeons Blanc” was exhibited at the 1922 Salon des Artistes Français, for which he won a gold medal. This painting is estimated at $100,000-$150,000. 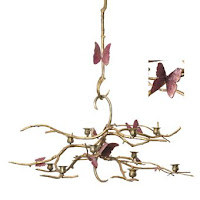 Lastly, the auction house is once again selling a large collection of the work of Claude and Francois-Xavier Lalanne (see my blog from June 2, 2009 “A Lalanne ‘Moment’ at Christie’s“). While I adore all of the whimsical animal sculptures that double as functional objects of furniture, I am especially enamored by the butterfly “Lustre” or a nine light chandelier made of gilt bronze and galvanized copper (Lot 124; 1996) estimated at $50,000-$70,000. If the price is too steep, I’ll gladly settle for the candelabra and sconces that are in the same style and are correctly described by Philippe Garner as being “plucked from an Art Nouveau jungle.”

On a final note, I am saddened by the second sale of furniture and objects from the venerable East 61st gallery of Historical Design. It was only several years ago, on December 16, 2006, that Christie’s held the 21/21 Historical Design Sale. It seams that that sale was only just the beginning. Recently the owners of the gallery, Denis Gallion and Daniel Morris, closed the space and opened a by-appointment-only showroom on East 91st. I remember there original space, which held many wonders for a student of the decorative arts fondly and will miss visiting them.

All of the images are from the Christie’s Important 20th Century Decorative Art & Design Auction Catalogue.