Inventing the Modern World: Decorative Arts at the World’s Fairs, 1851-1939. The New Orleans Museum of Art, April 12- August 4th.  From nearly a century following their inception in 1851, world’s fairs were the most important vehicles for debuting advancements in modern living and democratizing design. The decorative arts they showcased were the physical manifestation of the progressive, economic, and technological ideals embodied in the fairs. Inventing the Modern World explores the ingenuity and diversity of decorative arts made for world’s fairs, from the London Great Exhibition of the Works of Industry of All Nations in 1851 to the New York World’s Fair in 1939. Impermanent as the exhibitions were, decorative arts are among the only surviving elements. For more info click here. 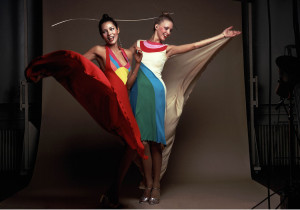 Still from Stephen Burrows, “When Fashion Danced” exhibition at the Museum of the City of New York

Stephen Burrows: When Fashion Danced, Museum of the City of New York, Now open. Stephen Burrows: When Fashion Danced is the first major examination of the work of the designer The New York Times called in 1977 the “brightest star of American fashion.” It looks at the period spanning the 1970s when Stephen Burrows’s meteoric rise to fame made him not only the first African-American designer to gain international stature, but a celebrated fashion innovator whose work helped define the look of a generation. With vibrant colors, metallic fabrics, and slinky silhouettes that clung to the body, Burrows’s danceable designs generated a vibrant look that was of a piece with the glamorous, liberated nightlife of the era. Through photographs, drawings, and original garments, the exhibition will trace Burrows’s evolution from creating eclectic looks for his friends in the 1960s to his work with the chic 57th Street retailer Henri Bendel to the floor of Studio 54, as he dressed such 70s style icons as Cher, Liza Minnelli, and Diana Ross. For more info click here. 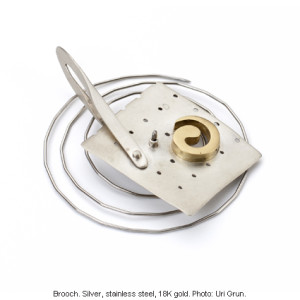 Opening April 6th. In this newest body of work, Stern-Schocken explores her earlier forms and imbues them with weightlessness.  This investigation stems from her interest in the ‘non-object’  and focuses on the space between the objects rather than on the object itself. The stones set into the brooches and pendants appear to be ‘in the air.’  Stern-Schocken’s silver and stainless steel structures attempt to ‘float’ the stone, while giving a sense of movement with intricately constructed hinges and mechanisms.  Some of the pendants involve cut-outs from airplane safety instructions that speak quite literally to being ‘in the air,’ being en route while at the same time being in danger. The tension between the pending catastrophe described in these little vignettes and the optimistic ‘smiley’ graphics, is captured in the metal frames. For more info click here.

The Practice of Patronage with David Wiseman and Zesty Meyers, Museum of Arts and Design, Tuesday, April 16, 2013 – 7:30 pm.  Critical to the survival of the American design and decorative arts community is the practice of patronage. As part of After the Museum: The Home Front 2013, this live event will feature rising talent David Wiseman and his gallerist Zesty Meyers, co-founder of the leading New York gallery R20th Century. Known for is wide range of work, and use of materials that require highly labor-intensive techniques, Wiseman has a refreshing and intimate creative process that involves both public and private commissions. Following a presentation by the designer on his process, Meyers – renowned as a champion of both emerging and established talents – will join a live panel discussion with Dan Rubinstein, Co-curator of After the Museum and Editor-in-Chief of Surface magazine, on the state of patronage, design and the decorative arts today.

Fashion Symposium: Cross-Pollination: Fashion and Technology. Fashion Institute of Technology, Katie Murphy Amphitheatre. Thursday, April 25, 9 am – 12 noon.Scholars and fashion insiders explore the links between fashion and technology from multiple perspectives in this half-day symposium. Bradley Quinn, a well-known consultant and publisher in the fashion industry and author of Techno Fashion, The Fashion of Architecture, UltraMaterials, Textile Designers at the Cutting Edge, Design Futures, Fashion Futures and the forthcoming Textile Visionaries, is the keynote speaker. Other speakers include Steve Zades, creator of the Odyssey Project on Imaginative Intelligence; Suzanne Lee, fashion designer and director of The BioCouture Research Project; and Sabine Seymour, Chief Creative Officer of Moondial. Register here.