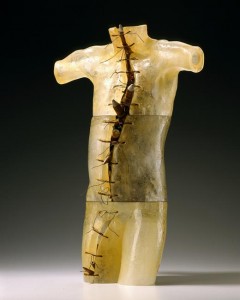 Playing with Fire: 50 Years of Contemporary Glass, Museum of Arts and Design, through  April 7, 2013, This exhibit takes a comprehensive and eye-opening look at the breadth of innovative processes and artistry in contemporary glass showcasing an astonishing diversity of works that use glass, from pieces by early adaptors such as Dale Chihuly, who entered MAD’s collection when he was still an emerging artist; to installations by Israeli designer Ayala Serfaty, who creates clouds of light with innovative processes. Also included are pieces by artists and designers not commonly known for their work in glass, such as James Turrell, Donald Lipski, and Ettore Sottsass. There will also be a number of special installations, including Peter Bynum’s “Untitled No. 202”—a wall-mounted triptych made up of thin layers of painted glass mounted on lightboxes, in which viewers can change the brilliance of the multicolored hues by shifting the intensity of light.

Designing Tomorrow: America’s World’s Fairs of the 1930s, Museum of the City of New York, opening December 5, 2012. Showcases six Depression-era expositions that brought visions of a brighter future to tens of millions of Americans. As many Americans still waited on bread lines, fairs in Chicago (1933/34), San Diego (1935/36), Dallas (1936), Cleveland (1936/37), San Francisco (1939/40), and New York (1939/40) foretold much of what would become commonplace in postwar America–from highways and the spread of suburbia to modernist skyscrapers and products such as electric toasters, nylon stockings, and television. The fairs looked forward to an era of prosperity, when ingenuity and innovation would transform not only American cities but also the everyday lives of American citizens. Visitors will see sleek, modern furniture and appliances of the era, vintage footage from the fairs, and futuristic drawings of the New York World’s Fair’s buildings from the Museum’s collection.

Polly Mellen in Conversation with Fern Mallis, 92nd Street Y, December 12, 8pm.
Polly Mellen has been a stylist and fashion editor for more than 60 years. Her work, first under the legendary Diana Vreeland at Harper’s Bazaar and later under both Vreeland and Grace Mirabella at Vogue, helped define a new, more modern ethos about clothes and how women wore them. She helped create unforgettable images with photographers like Richard Avedon, Irving Penn and Helmut Newton. Award-winning creator and organizer of Fashion Week in New York and cities around the world, Fern Mallis has been an industry game changer in the world of fashion and design for 32 years. 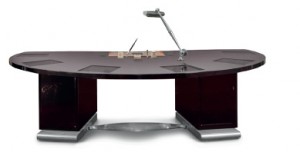 The Steven A. Greenberg Collection, Masterpieces of French Art Deco, Christies, December 12-13, 2012 This museum-quality collection represents the most important selection of French Art Deco works to come to market in the United States. Offered over two days in an Evening and Day sale, these masterpieces illuminate the inspired collecting vision of Steven A. Greenberg, a leading American connoisseur. Greenberg was an important voice within a generation of American collectors who were inspired by this important trans-Atlantic design dialogue. His collection—anchored by works from some of the period’s most celebrated masters, including the lacquer artist Jean Dunand, the ébéniste Emile-Jacques Ruhlmann, and the painter and illustrator Jean Dupas—is a testament to his passion and pioneering approach. The highlights below offer just a preview of the collection’s over 200 lots. Pre-sale exhibition in New York, which begins December 8.

Design Miami/ 2012: The global forum for design. December 5 – 9. Meridian Avenue + 19th Street, Miami Beach. Each fair brings together the most influential collectors, gallerists, designers, curators and critics from around the world in celebration of design culture and commerce. Occurring alongside the Art Basel fairs in Miami, USA each December and Basel, Switzerland each June, Design Miami/ has become the premier venue for collecting, exhibiting, discussing and creating collectible design. Visit: http://miami2012.designmiami.com/