Impressionism, Fashion, and Modernity, the Metropolitan Museum of Art, February 26– May 27, 2013, Some 80 major figure paintings, seen in concert with period costumes, accessories, fashion plates, photographs, and popular prints, will highlight the vital relationship between fashion and art during the pivotal years, from the mid-1860s to the mid-1880s, when Paris emerged as the style capital of the world. I saw this exhibition when it was on view at the Musée d’Orsay in Paris last September and walked away mesemrized by the grogeous gowns as well as the presence of masterpieces by Monet, Manet, and Renoir.

Shoe Obsession, The Museum at FIT, February 8 – April 13, 2013,. Shoe Obsession, examines our culture’s ever-growing fascination with extravagant and fashionable shoes. Shoe Obsession will feature approximately 150 examples of contemporary footwear, highlighting the extreme, lavish, and imaginative styles that have made shoes central to fashion.

SUSAN TAYLOR GLASGOW – Couture du Verre, Heller Gallery , February 9 – March 2, 2013. With a sensibility not unlike one taken from a hypothetical prequel of Mad Men and her tongue firmly in-cheek, Susan Taylor Glasgow re-examines the utopian concept of ‘domestic bliss,’ in the 1950’s United States through the lens of 21st century feminism. Her work comments on history as much as on today’s nostalgia for a flawed but fetishized past. Her sculptures are three-dimensional glass collages. They are often embedded with advertising text and imagery appropriated from magazines, movies and media-related memorabilia, which broadcast the domestic standards of the time. For more information: http://www.hellergallery.com/ 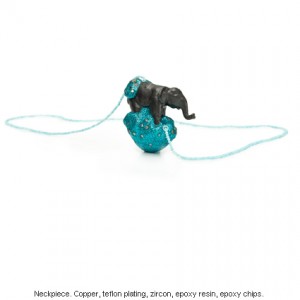 Happy Days: Shirly Bar-Amotz, Gallery Loupe, Feb. 13 – March 11, 2013. In this exhibition, Bar-Amotz has created dramatic “landscapes” crowded with details that tell their stories through flashes of fairy tales and a “carnival” sense of celebration. Using rich animal imagery and a vibrant palette, Bar-Amotz builds miniature “sculptures” that freeze a moment in time and evoke the artist’s recollections of a world long ago and far away. Explaining her snapshots of fantasy, Bar-Amotz states: “These are animals from ‘there’ and not ‘here’: a swan, rabbit, hippopotamus, rhinoceros, a camel that turns into a deer, a tiger, the king of the jungle from European fairy tales which arrived here and became something new: something local, Israeli, with a longing for European fantasy, for memory.” In creating Happy Days, Bar-Amotz combines both cheap, readymade materials with precious metals and stones – a reference to the material European culture that Israeli society redefined in an attempt to create a new culture.

Molly Hatch: Reverie, Philadelphia Art Alliance, February 7- April 28, 2013. For “Reverie,” her first exhibition at the Philadelphia Art Alliance, Molly Hatch has created new works inspired by her “continued effort to claim the functional surface of the dinner plate as a painting surface.” Drawing from 18th and 19th century plates from her family’s own collection, Hatch has created a series of “plate paintings” in which design elements from “source” plates are drastically scaled up and applied in a matrix on a grid of new plates, forming an image all its own. In response to the domestic history of the Philadelphia Art Alliance—once a private home—Hatch has also created wallpaper called “Tea For Two.” Working closely with curators at the Clark Art Institute in Williamstown, MA, Hatch studied the teacup collection of Francine and Sterling Clark, and began painting teacups and designing a pattern that employed both their intricate surface designs and their silhouettes. 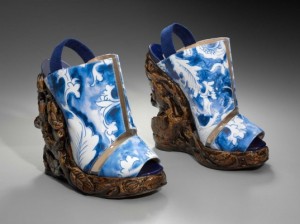 New Blue and White, MFA Boston, February 20- July 14, 2013.  “Blue and white” means, at its simplest, cobalt pigment applied to white clay. Over the course of a millennium, blue-and-white porcelain has become one of the most recognized types of ceramic production worldwide. With roots in the Islamic world and Asia, and strong presence in Europe and the Americas, various cultures adapted blue-and-white, from the Willow pattern to isznik. Taking inspiration from global blue-and-white traditions, today’s artists continue the story, creating works that speak to contemporary ideas. They tackle diverse issues, ranging from the public (the political landscape, cross-cultural interchange), to the personal (family, memory, the act of collecting), to the aesthetic (abstraction, pattern, the role of decoration). “New Blue and White” explores the ways in which contemporary makers, working in ceramics as well as other media ranging from fiber to furniture to glass, have explored this rich body of material culture. An international selection of artists and designers is featured in the exhibition, and recent acquisitions of work by the ceramic sculptor Chris Antemann and fashion designers Rodarte are drawn from the MFA’s own collection.

Fashion Icons with Fern Mallis: Vera Wang, 92nd Street Y, February 19, 2013. Tickets from $29.00. The Vera Wang name is synonymous with elegant, understated gowns constructed from the finest fabrics. Her bridal gowns are what Vera Wang is famous for. She uses rich fabrics such as silk lace and duchesses satin, in the tradition of Paris couture and applies them to the simple shapes associated with American sportswear, like the vest dress. In June 2005, Vera Wang was named Womenswear Designer of the Year by the Council of Fashion Designers of America.