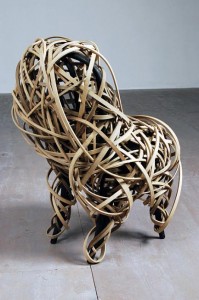 Against the Grain: Wood in Contemporary Art, Craft and Design, Museum of Arts and Design, March 19-September 15, 2013. The exhibition emphasizes the way artists, designers, and craftspeople have incorporated post-modernist approaches and strategies into woodworking—deconstructing vessel shapes, playing on the relationship between function and form, and utilizing woodturning and furniture techniques in the creation of sculpture. The works, most of which have been created since 2000, challenge traditional applications of wood within the design and craft worlds, and exemplify the wide-ranging, frequently unexpected, approaches to the medium by contemporary artists and designers.

Italy in Motion, Coral Gables Museum, Florida, March 8 – June 23, 2013. Throughout the twentieth century, Italian design and the phrase “Made in Italy” developed a particular kind of significance – that of quality, sophistication and above all, elegance – which continues to resonate today. The exhibition Italy in Motion, curated by Chloe Chelz, focuses on design and mobility, employing the overlapping themes of Style, Velocity and Identity. As objects of material culture, cars, motorcycles, scooters and bicycles as well as historical and contemporary photographs illustrate how the country’s design legacies have transcended function to become defining symbols of both industry and imagination. For more information: http://www.coralgablesmuseum.org/upcoming-exhibitions.php

Beginning March 5th, the French Institute Alliance Française (FIAF) will present the new CinémaTuesdays series The Man Makes the Clothes: Pierre Cardin in Film, a tribute to the pioneering Italian-born French designer that examines his contribution to some of the greatest French films of the post-war era. Pierre Cardin in Film is presented as part of Fashion at FIAF, a program celebrating fashion in March.

Beauty and the Beast, dir. Jean Cocteau on Tuesday, March 5.

Without Compromise: The Cinema of William Klein, Museum of Arts and Design, March 1- April 29, 2013. 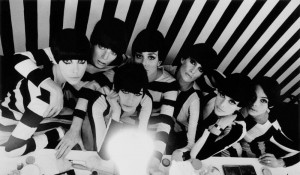 Tracing the cinematic achievements of this important voice, Without Compromise surveys a selection of Klein’s films, chosen in collaboration with the artist himself, and presented on 35mm prints. In a rare appearance, Klein himself will take to the stage at MAD for a one-night conversation examining his works and influences.  Through his embrace of critique and satire, and his fierce independent attitude, Klein reminds us all that it is only through raw and uncompromising artistic vision can society begin to comprehend its own visage. For more information: http://www.madmuseum.org/series/without-compromise-cinema-william-klein

In Conversation: William Klein, Wednesday, March 13, 2013 – 7:30 pm . For over fifty years, William Klein has revolutionized photography, film, and documentaries.  With effortless leaping from subject to subject, including fashion, sports, politics, the civil rights movements, and more, Klein utilized new practices to push the possibilities of a captured moment.  In this rare opportunity, Klein takes to the stage at MAD to discuss his multifaceted body of work.