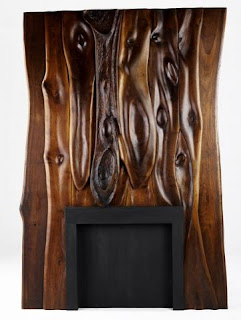 Phillip Powell, Fireplace (1956 – 1958), walnut, Rago Auctions: Saturday, April 12, 2008, A 20th Century Modern Weekend (Lot 140).
Much has been written about Paul Evans (1931-1987), the highly successful New Hope furniture designer whose work has become an essential component of the American Studio movement. It is hard not to recognize Evans’ sculpted steel sideboards or chrome coffee-tables but his most interesting work, in my opinion, was the furniture that he created in collaboration with Phillip Lloyd Powell, another New Hope craftsman. I first wrote about the Evans and Powell collaboration for a Sotheby’s auction catalog (Important 20th Design, June 14, 2006) which featured the work of these two great designers. Since then (but not because of my article), prices for their work have skyrocketed. And while Evans has dominated the limelight, Powell is not far behind. His work is always included in the Rago Auctions and is exhibited by Todd Merill Antiques in New York as well as many other exclusive galleries.

Born in 1919 in Germantown, Pennsylvania, Powell attended Drexel University where he studied engineering. However, he decided to abandon his career path to focus on his favorite activity: woodworking. After serving his country during World War II, he settled in New Hope in 1947. New Hope, located in Bucks County, was known then as it is now as a community for artists. Powell had opened up his own shop selling refurbished antiques and also the work of his contemporaries. While running the shop, Powell continued to actively make his own furniture. An able craftsman, he even built his own home. Eventually, in 1951, Powell opened a showroom where he sold his handcrafted furniture; all of the pieces were hand-carved in his New Hope studio.

Fortuitously, it was in the early 1950s that Evan’s wandered into this shop and impressed by the selection and quality of the work on display that he asked to exhibit his work there as well. Evans, considerably younger than Powell, already had a burgeoning career of his own. This began a fruitful collaboration which resulted in the two men becoming business partners and artistic collaborators as they opened another shop together and worked side by side in a shared studio space. Powell’s beautiful carved woods complemented Evans’ hard steel surfaces. One of their most prolific joint efforts was the Upper West Side apartment of the actress Shari Lewis. The duo created over thirty signature pieces of furniture for her.

Powell’s material of choice was wood. Beautifully carved walnut consoles and sideboards show the craftsman’s hand in their imperfect curves. He once told an interviewer (Edith Skiba Lamonic, “Behind the Eye: Phillip Lloyd Powell” Artsbridge Online, Dec 6, 2005 http://www.artsbridgeonline.com/behindtheeye/powell.shtml), that his favorite tool was a spoke shave, a side-handled plane, which allowed for such a silhouette. Powell, who loved to travel, often included found objects in his furniture. During his lifetime he produced no more than one thousand pieces of furniture. His clients could always rely on him to produce highly unique pieces for them in the most beautiful woods which had a sculpture-like quality to them. But his works weren’t show pieces, they were well-made and functional. He carefully thought out each design, always sketching it first. In that same interview he explained that his furniture was held in place by the use of splines, rabbit joints, dovetails and butterfly inserts. He also coated his pieces with oil to bring out the color and grain of the wood. 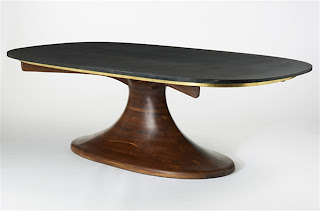 In 1961 America House, which was adjacent to the Museum of Modern Art in New York, hosted an exhibition of Evans’ and Powell’s work. Thirty pieces were featured in this exhibition, which Powell described as a highlight of his career. In 1964 the duo ended their collaboration but this was not the end of Powell’s career. He continued to make furniture in his New Have studio until his death in 2008.