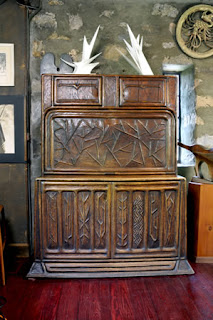 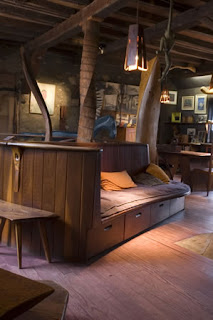 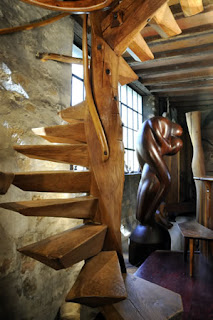 In my June 30, 2009 column I wrote about Phillip Lloyd Powell and his contribution to the American studio craft movement. In recent years there has been a lot of attention paid to the group of artists who were part of this milieu. Aside from the fact that they are always fixtures in the 20th century design auction catalogues, Todd Merrill published a noteworthy book dedicated to American mid-century design title “Modern Americana: Studio Furniture from High Craft to High Glam” (Rizzoli, October 2008). Recently I received news of an upcoming exhibition and symposium dedicated to man that can be called the father of the American studio craft movement, Wharton Esherick.

Esherick began his career as a painter and illustrator in the early part of the 20th century. While he was a talented artist who had received formal training at the Pennsylvania Academy of Fine Arts, Esherick was not successful as a painter and decided to explore other mediums through which he could express his artistic prowess. He became interested in woodcutting and began carving out designs on the frames of his paintings. This led to a job creating woodcuts for books illustrations. Throughout this, Esherick also become involved with sculpture. Esherick, who had moved with his wife to Paoli, Pennsylvania in 1913, began to build for himself a studio on the grounds of his home. His work on this home and studio would lead him to find his true passion: crafting furniture out of wood, which he at first did out of necessity. This project that Esherick began in 1926 evolved into a lifelong venture which resulted in the Wharton Esherick Museum, opened after his death. A follower of the Arts & Crafts movement, Esherick believed in the gesamtkunstwerk, or the total work of art, and created every detail of the home to work in harmony with its surroundings. He did not leave any object to chance; he designed everything from the bowls to the staircase. In fact, the staircase that he designed, in 1930, remains one of the most recognized Esherick masterpieces. The red oak staircase sharply twists all the way up to the second floor. It was designed in such a way that it can be removed and assembled all over again. Since it was first installed in Esherick’s home, it has been twice exhibited. Most famously it part of the “America At Home Display” at the 1939-1940 New York World’s Fairs, for which he and George Howe created the “Pennsylvania Hill House.”
In the beginning Esherick’s work was influenced by the Art Deco and Cubism, as those were the prevailing trends in art during his time. As time progressed, his work became more organic and yet still full of angular lines. In his designs, for furniture and objects, he used woods that were locally available to him. And he chose each piece of wood based on its natural characteristics and tried to further demonstrate the beauty of the wood by exposing the grain through carving. Because it was impossible to find two pieces of wood exactly alike, Esherick would often sell pieces directly from his home to clients, he was always concerned that he would be unable to recreate the piece in its entirety. Esherick did not consider himself to be a craftsman but an artist. He was not so much concerned with the construction of the piece as he was with its design. Perhaps his most famous commission was for the interior of the home of Curtis Bok, located in Gulph Mills, Pennsylvania. The project, from 1935-1938, was Esherick’s largest. This included the office, small library and bookcases, a music room, a spiral staircase, doorways, several fireplaces, furniture, and sculpture. The incredible Bok fireplace and doors are now part of the Philadelphia Museum of Art’s permanent collection.
Esherick’s genius was recognized during his lifetime and he was the subject of museum and gallery exhibitions and participated in two world’s fairs. Many great studio craftsmen such as Sam Maloof, Arthur Espenet Carpenter and Wendell Castle praised his work and acknowledged his enormous contribution to American studio craft movement.
The exhibition and symposium,” Wharton Esherick and the Birth of the American Modern,” will take place at the Van-Pelt Dietrich Library Center, University of Pennsylvania from September 7, 2010-February 13, 2011. For more information on the exhibition and also how to submit symposium papers see http://www.library.upenn.edu/exhibits/esherick.html