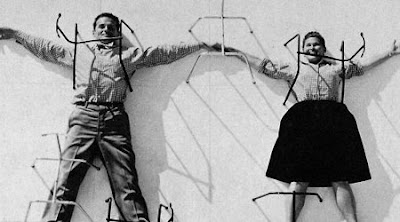 This Friday, as part of the Architecture and Design Film Festival, Jason Cohn and Bill Jersey presented their new film, “Eames: The Architect and the Painter” about the legendary husband and wife design team. I am really curious to see what this new film will reveal about the Eames duo but not too long ago I discovered that the Eames made films themselves.

The films of Charles and Ray Eames have been described as the “Eames essays” in that they were an integral part of their career, just like their designs for furniture and their industrial design and architecture projects. Charles and Ray used film as another medium through which to express their ideas. Over the course of thirty-two years, from 1950-1983, they shot approximately 100 short films.

These films deal with a wide range of topics, from toy trains to the solar system, to computers, and of course, their own design and architecture projects. They reveal to us not only what their design process was like but also what inspired them, which will be of interest to anyone who is an enthusiast of mid-century American design. Some of their most iconic works are featured in the films including the fiberglass chairs, the famous lounge chair and their own Case Study House. One of the films, “Design Q+A”, is an interview with the designers.

These films were not only a vital part of the oeuvre of these two iconic designers but they are also works of art in and of themselves (the music for many of the films was composed by Academy-Award winning composer Elmer Bernstein) and should be appreciated as such. In 1960 the couple even won an Emmy award for their film “The Fabulous Fifties”. Another little known fact is that Charles Eames interest in film went beyond his own documentaries and shorts, he worked on Billy Wider’s film “The Spirit of Saint Louis” in 1957.

A selection of these films have been released on DVD over the past several years.

Eames: The Architect and the Painter

Prior to the film there will be a panel discussion.
Friday, Oct 21, 6:00 -7:00
“Architects & Filmmakers as Storytellers”
Panelists: Eames Demetrios (the couple’s grandson), Marc Kushner, and Oren Safdie

“The Architect and the Painter is the first film about Charles and Ray Eames since their deaths and the only film to peer inside their collaboration, their marriage and the “Renaissance studio” they created in a gritty warehouse in Venice, CA. Narrated by James Franco, the film draws from a trove of archival material, primarily the stunning films and photographs produced in mind-boggling volume by Charles, Ray, and their staff during the hyper-creative forty years of the Eames Office. Family members and design historians help guide the story, but it is in interviews with the junior designers swept into the “24-7” world of “The Eamery”, that a fascinatingly complex picture of this husband and wife creative team really emerges.”