Emily Cobb and Nicole Polentas: Jewelry That Tells A Story, Both Fiction and Non-Fiction 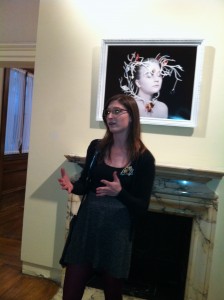 Artist Emily Cobb at the PAA

What makes contemporary art jewelry so exciting is that young artists are pushing the boundaries and redefining our ideas about jewelry. A necklace is no longer just an accessory or bodily adornment; referred to as a neckpiece, it is a work of art which, like a great painting, has a message or an idea behind it. In the case of Nicole Polentas or Emily Cobb, two young artists from different sides of the Atlantic, it is a work of art that tells a story. In Polentas’ case this story is about her Greek roots, or in Cobb’s case an actual fairy tale brought to life. Cobb and Polentas are currently having their big debuts, the former at the Philadelphia Art Alliance in Philadelphia and the latter at Gallery Loupe in Montclair, NJ. 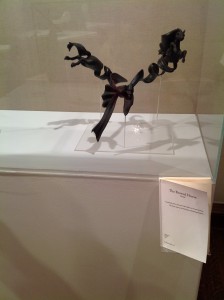 “The Bowed Horse: Untied”, Neckpiece, Nylon, 2011. Notice the book next to the display case.

“Legends: Studio Jewelry by Emily Cobb” (September – December 10, 2012) is a very unusual show but Cobb is also a very unusual artist. The title of the exhibition has a double meaning; it refers to modern-day fairytales that inspired Cobb’s work and also to the term used to describe an illustration or symbols on a map. Inspired by Chris Van Allsburg’s book The Mysteries of Harris Burdick , Cobb has created jewelry- neck and earpieces, brooches, and earrings that are based on characters from fairytales. These characters are not your typical Disney personages but are part of Cobb’s “personal fairytales” and are almost always animals. She has a particular fondness for cringe-worthy creatures: centipedes, beetles and boa constrictors as well as for four-legged beasts such as horses and elks.  Cobb goes a step further, not only does she make the actual work but she invents the story surrounding each character. The title and caption are printed on the cover of a book with blank pages that is left next to the work and it is up to the visitor to complete. Cobb then takes all of the stories or comments that visitors have written down and uploads them to a tumblr page  that she has created especially for this exhibition. This is an ingenious idea. It allows the work to have a life outside of the exhibition but also gives patrons an opportunity to reconnect with their work once they have gone home. 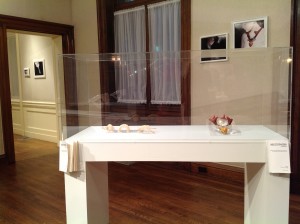 Jewelry in the cases and photos on the walls. No need to imagine what the pieces will look like on the body.

Cobb, a recent MFA-grad from the Tyler School of Art and Temple University, makes her work with the assistance of CAD (computer-aided design), and increasingly popular tool for artists today, and made using a 3D printer. CAD and 3D printing are revolutionizing the jewelry world creating a whole new language and medium. It is very exciting to see how far this new technology has evolved.

Her vision, as is the work, is incredibly unique. It is conceptually brilliant and quite complex yet I question its wearbility.  Since most of us do not have an imagination as fertile as Cobb’s and may have a hard time figuring out how some of the pieces should be worn, photographs have been hung around the gallery with a model wearing each of pieces on display.  If these photos are still not enough, Mari Shaw, an art jewelry collector and a fan of Cobb’s work, wrote after trying on Cobb’s The Elk with Antlers that Never Stopped Growing, 2011 that “I tried on the glass-filled nylon elk headpiece in Emily’s studio at Tyler. Immediately, I felt constrained, but at the same time, the majestic antlers made me feel proud and important. I started walking deliberately and carefully as if I were a deer in the forest on high alert in hunting season or a human acting as a beast of burden, carefully bearing a heavy-but-fragile ancient urn or a child emperor who will fall if jostled.” (Emily Cobb’s Fairytales of the 21st Century, Lark Crafts, April 13, 2011) Cobb was particularly fond of the PAA galleries as they resemble an old library, the perfect place to read a good fairytale. 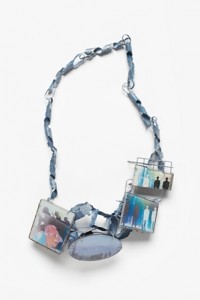 Polentas, a graduate of RMIT in Melbourne, was included in the gallery’s Topos exhibition in—but this is her first solo exhibition in the United States.   Nicole’s jewelry is autobiographical- not only was it a fascinating lesson in Cretan history but also an insightful look at the work of an artist who is thoughtful about her roots and chooses to express her feelings about Cretan culture, which is very different from other Greek regions, through her jewelry. And while it appears that Nicole’s work is a valentine to Crete, each piece is layered with meaning. Some of which is equal parts critique and tribute.

An unusual aspect of Nicole’s work is her fascination with mantinades, which are short poems, and rizitikas, or folk songs, both of which are specific to Crete. Nicole knowledge of these is encyclopedic and she incorporates the text of these songs and poems into the jewelry in the form of script that she has fused onto the silver scrolls of all of her pieces. The text is meant to be illegible, as Nicole explains, because it is not supposed to provide us with answers but rather raise more questions about the work. 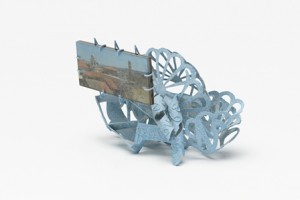 Nicole, who was born in Australia, travels yearly to Crete and is inspired but its landscape as much as she is by the culture. Sometimes these inspirations are translated literally and at other times symbolically. Some of the images, or gems as Nicole calls them, that she sets into her brooches or neck pieces are scenes of the island that the artist has manipulated. Recently, while traveling through the region, Nicole has started to notice how closely the billboards that are located throughout the island also resemble the images found in her work. Most of these billboards, which Crete has no made illegal as part of an island-wide beautification project, have been abandoned and now only have an amalgam of glued old posters scraps. And of course her use of bright colors is another reference to the gorgeous landscape of Crete, whether it is the blue of the sea or the white of its world-famous sandy beaches. While there are many different threads running through Nicole’s work that make it so rich with meaning, because she is such a gifted jeweler, the beauty and the sophisticated construction of each piece is never overshadowed by the stories. 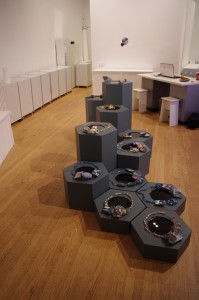 This brings us to the psychomanteums which are naturally occurring rock pools of myth where ancient Greeks would go to consult the oracles. The psychomanteum is Nicole’s way of taking all of the different references in her work and uniting them. She has also chosen to use these reflecting pools, which she made and shipped over to Gallery Loupe from Melbourne, as a stage for her work. Reflections of the jewelry appear in the pools as apparitions. Or as Robert Baines, Nicole’s former professor at RMIT and world renowned jeweler has written “these artifacts return to the rock pool as a physical presence of what was once a phantom vision.”