Everything Was Designed Right by Russel Wright… 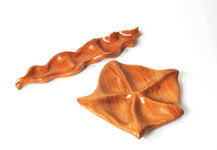 It has come to my attention that an exhibition dedicated to Russel Wright (1904-1976) is currently on view at the SFO Airport in Terminal 3. Yes, you read that correctly. The exhibition, Wright at Home: Modern Lifestyle Design 1930-1965, on through the end of October (check dates if you plan on visiting as I have seen several different end dates for the exhibition), is taking place at the San Francisco International Airport. While it may be cheaper for you, depending on where you live, to visit Manitoga, the Russel Wright Design Center, West Coasters also deserve to be familiar with Wright’s simple yet stylish designs for home furnishings, lighting, dinnerware and glassware. With 250 pieces, said to be on view, this is not a small exhibition and I appreciate that the organizers, San Francisco Airport Museums, whose mission is to “humanize the Airport environment,” thought outside the box and chose to feature objects of design rather than paintings.

Prior to Martha Stewart there was Russel Wright. The designer is credited with creating a new American lifestyle. Wright, along with his wife Mary, believed in well-designed, mass-produced, and affordable objects for the home. The duo recognized the need for a revolution in home design, after the stock market crash in 1929, when Americans were unable to spend a lot of money on such things but still wanted quality goods. In 1939 Wright released a series known as American Modern. This iconic collection of ceramic dinnerware would go on to become highest grossing line of home accessories. The line, manufactured by Steubenville, was in production from 1939 until 1959. During this time Wright experimented with different glazes, introduced new shapes and colors while always keeping the line affordable for the masses. Wright designed objects made of earthenware, spun aluminum, solid wood, paper, stainless steel, and plastic. He introduced other dinnerware lines as well, such as Iroquois Casual China (1946), which offered a wider range of products, and also Sterling (1949), which was a line solely for the restaurant industry, and in 1950 he released a furniture collection called Easier Living. Also that year, the husband and wife team published the “Guide to Easier Living,” a manifesto for the American housewife, it taught its readers how to simplify their lives by running an efficient household. Quite simply, Wright’s goal was to create a modern American home which included practical, functional and beautiful objects. Wright was different from other industrial designers because he mostly concentrated on home design, rarely venturing outside of that realm. Wright also signed all of his designs, allowing for his name to become a brand and making him the first real lifestyle designer.
I must confess that I, too, collect Wright’s dinnerware. I love the fun colors such as sea foam, chartreuse, cantaloupe, pink sherbet, and glacier blue, as well as the curvilinear forms of the celery dish, salt and pepper shakers, gravy boat and, my favorite, the water pitcher. A Wright devotee, I search for pieces from his American Modern line on my trips to Upstate New York and never settle for eBay finds, although a recent search on that website resulted in 424 hits for Wright.
I am embarrassed to admit that I have never visited Manitoga, located in Garrison, NY, despite numerous attempts to go. The Dragon Rock, Wright’s home and a modernist masterpiece, and his Studio have been converted into a museum that is open to the public year round. For more information, please visit http://www.russelwrightcenter.org/redesign/indexRWA09.html. I will hopefully go and explore in the near future and will post some pictures! In the meantime, below are some examples of Wright’s work.
Also, Donald Albrecht, curator of Architecture and Design at the Museum of the City of New York, is the recipient of this year’s Russel Wright Award, given to those individuals who “carry forward Wright’s philosophy and legacy in design, architecture, landscape design, the environment and living in harmony with nature.” He is also the curator of the forthcoming exhibition, “Eero Saarinen: Shaping the Future” that is to open at the MCNY on November 10, 2009. It will be the first retrospective of the architect’s career and I will cover it for this blog when it opens. 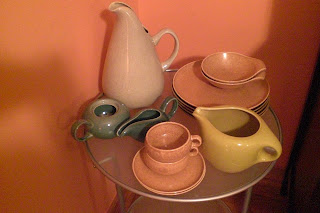 My own small collection of Wright pieces. The American Modern pitcher is my favorite.