With the fall season upon us and every magazine and newspaper rushing to preview upcoming art exhibitions, I want to reflect on some of the terrific shows that I saw this past summer. 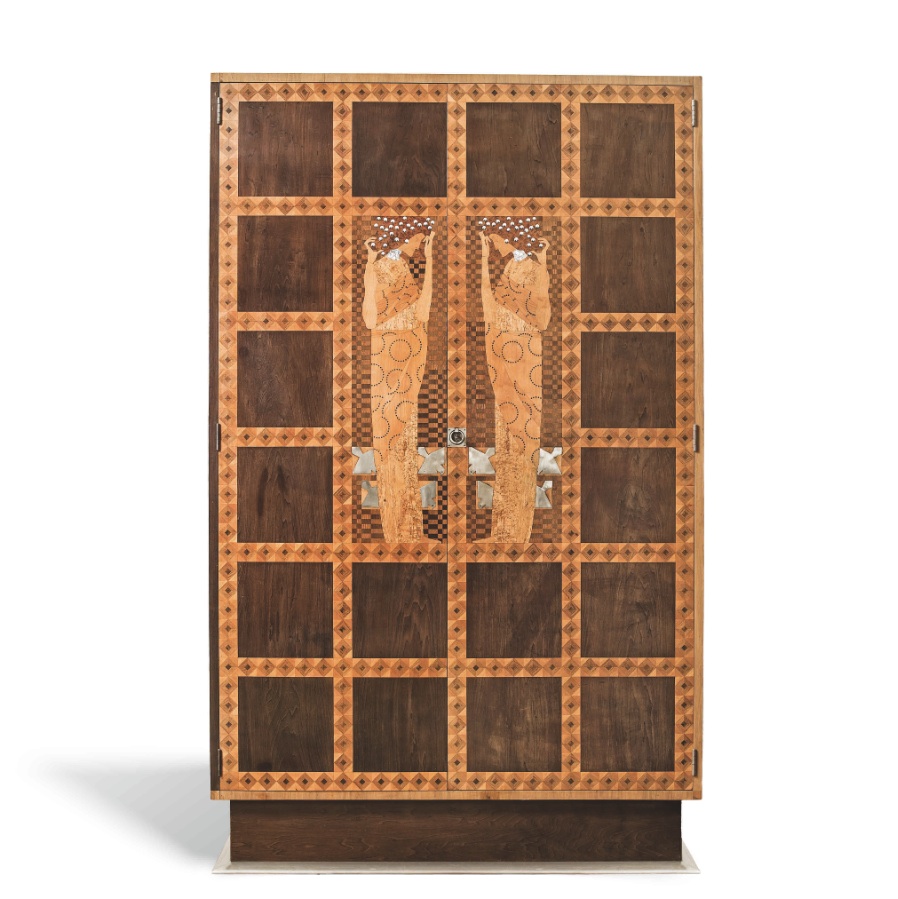 Following the Neue Galerie’s brilliant shows on Joseph Hoffmann and Dagobert Peche comes the overdue monographic exhibition of Koloman Moser. In May 1903 when Hoffmann launched the Wiener Werkstatte (WW), his partner in the endeavor was a  graphic artist, furniture designer, and interior architect Koloman Moser. The exhibition doesn’t just focus on the artist’s time with the WW but demonstrates that, as one of the founders of the Vienna Secession, he was already an established name in Vienna by the end of the nineteenth-century. The exhibition included over 200 works of art- including an in-depth look at his graphic work and illustrations- as well as furniture and objets from important commissions for the Viennese aristocracy. This being the Neue Galerie, the exhibition design is just as beautiful as the objects on view. Moser, who could not deal with the demanding clients, left the WW in 1907 and abandoned the decorative arts in favor of graphic arts and painting. 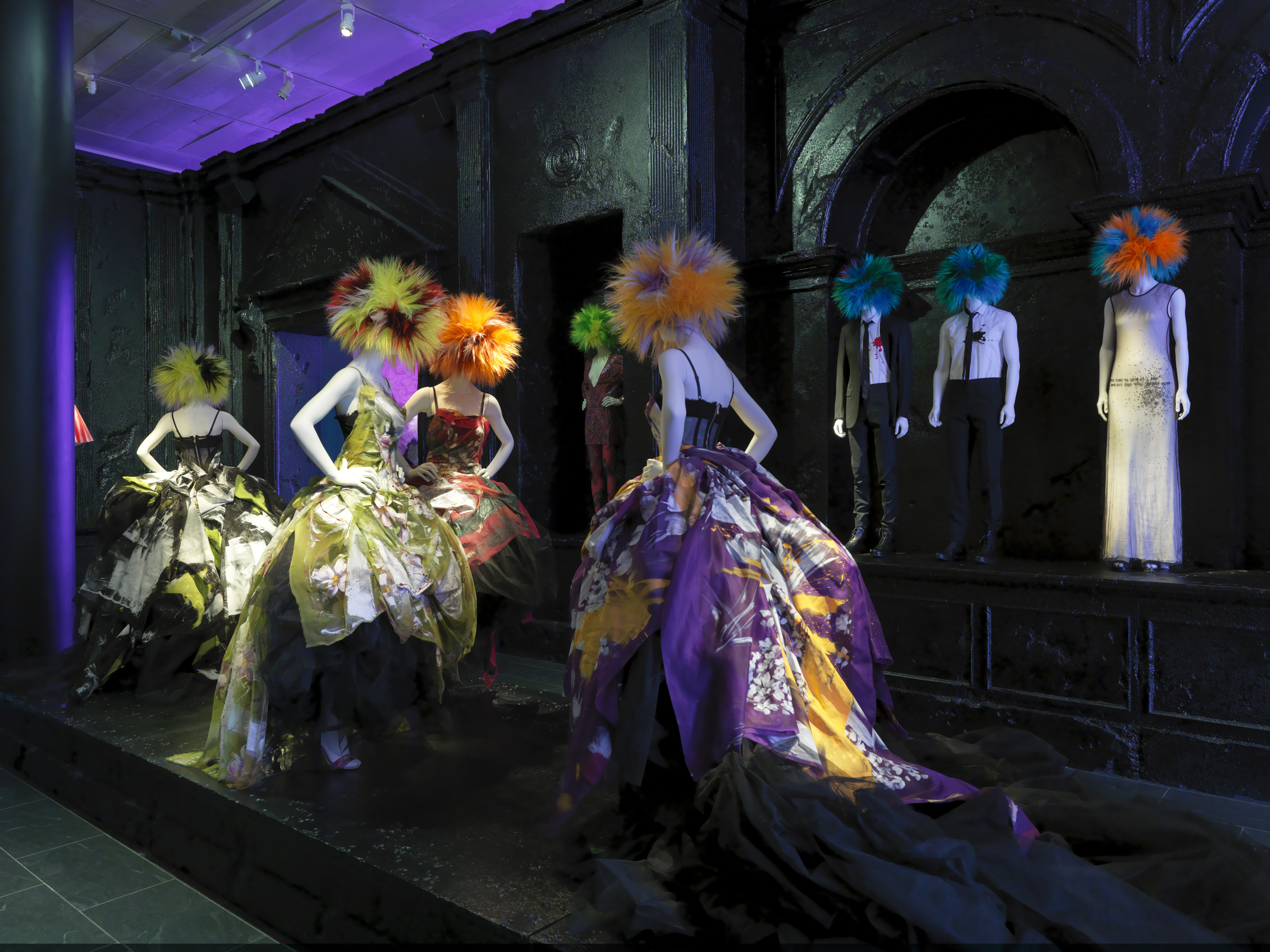 A loud and colorful exhibition that explored the 1970’s punk scene as it developed in New York City and London and showed how its fashions, mostly original do-it-yourself ensembles, left a lasting impression on  contemporary couture. A visit to this exhibition was akin to having your foot placed firmly in two worlds: the chaotic past and the bland present, made more interesting only by the fashions of designers who were inspired by this tumultuous period. Curator Andrew Bolton has once again succeeded in selecting pieces that place fashion on the same level as art. “Punk”  was split into four galleries based on the major trends in fashion: “D.I.Y. Hardware,” “Bricolage,” “Graffiti and Agitprop,” and “Destroy”. Prominently featured is the Queen of Punk, Vivienne Westwood and the designers that couldn’t help but be inspired by her like Rodarte, Junya Watanabe, Martin Margiela and Alexander McQueen. My favorite part of the exhibition, aside from the clothing, was the awesome recreation of the CBGB bathroom in New York and the Seditionaries boutique in London- the two places that gave rise to the punk scene. 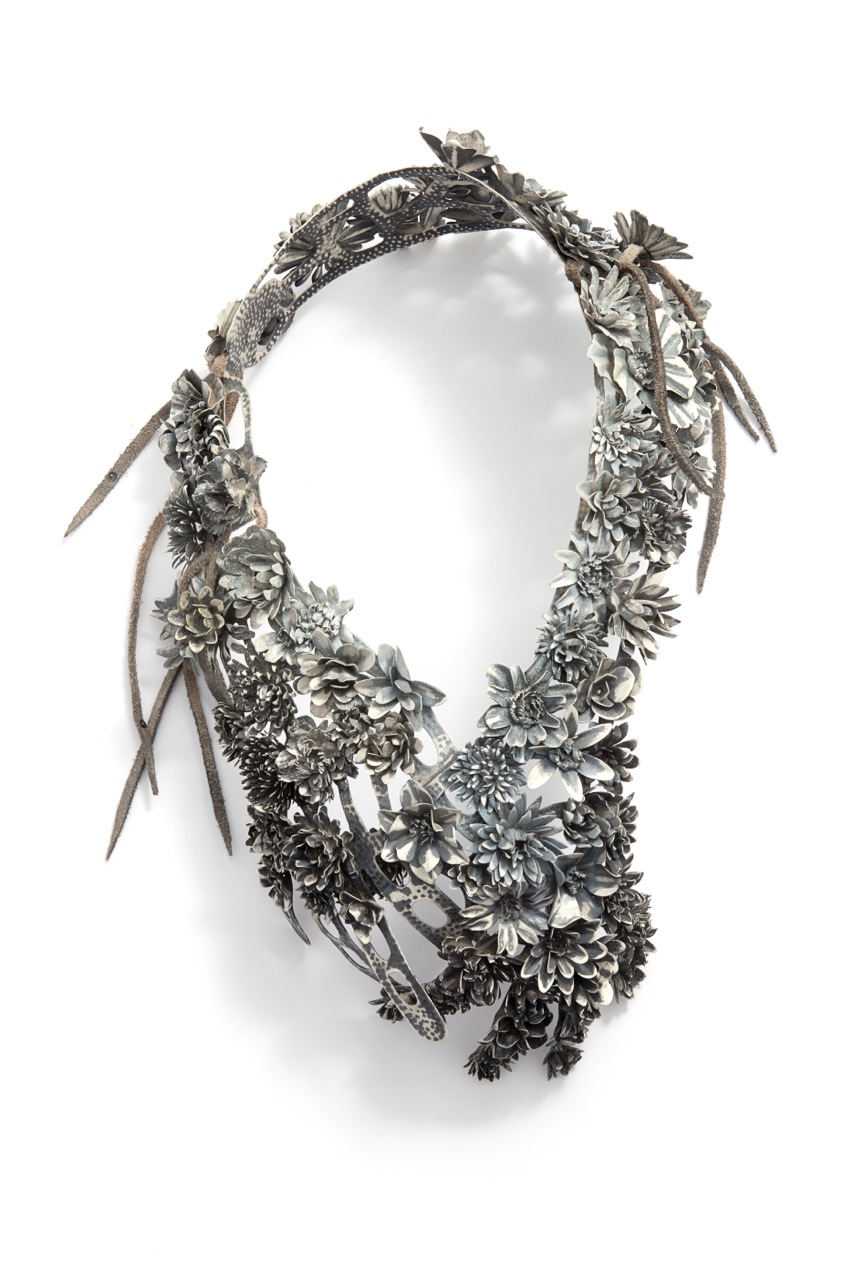 Swedish artist Hanna Hedman has built quite a reputation for herself since graduating from Stockholm’s Konstfack– University College of Arts, Crafts and Design in 2008. With eleven solo shows behind her as well as the inclusion of her work in the permanent collections of the Pinakothek der Moderne, Munich, Nationalmuseum, Stockholm, and the Marzee collection, Njmegen, among others, she was back on the east coast (her first solo exhibition at Ornamentum Gallery took place in 2009) with her most recent body of work called Loss. Dark, poetic, and romantic, Hedman’s collection of neck pieces, brooches, and arm ornaments made of silver, leather, copper, steel and paint, were inspired by the “aesthetics of loss, personal inner darkness, imitated nature and talismanic objects.”

In her artist statement, Hedman explained the work: “Blossoming sentimental flowers that imitate still life paintings become preserved into metal. Desiccated leaves form a hand that wants to hold on to you or a mask to hide behind. The work represent a frozen moment of decay; a preserved dark beauty that derives from the struggle of good and evil. Light and darkness are contesting one another. The jewellery wants to be beautiful on one hand, but on the other hand haunting and not even jewellery at all.” I like to think of it as Victorian-era jewelry re-imagined for the twenty-first century. 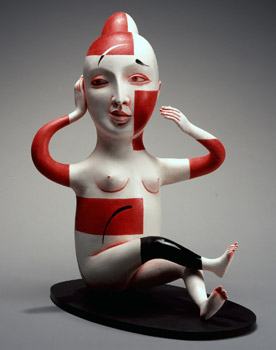 Sculptress Patti Warashina has been working with ceramics for the last fifty years and has created an amazing and diverse body of work that deals with the “human condition, feminism, car-culture, and current political and social topics.” The exhibition features over 120 works that constantly prompt you to wonder about the almost limitless possibilities of the medium. Warashina abandoned the wheel in the 1960’s and has since hand-build her pieces. For someone who was not familiar with Warashina’s work prior to this exhibition but is fascinated by the medium, seeing the work of this celebrated Pacific Northwest artist was a great lesson in contemporary ceramics. 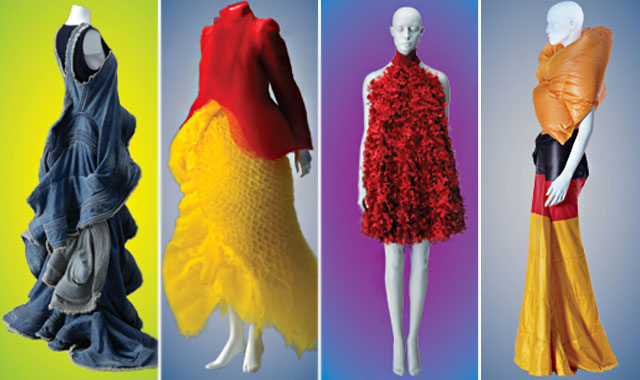 Probably the most talked about fashion exhibition after that other one (see Punk post above). In 1983 Rei Kawakubo and Yohji Yamamoto debuted their collections in Paris and forever changed the face of fashion by not only forgoing color (most of the clothing was monochromatic black and white) but by promoting a loose fitting and ultra unfeminine silhouette. This exhibition featured 100 garments (no longer restricted by color or shape) by such luminaries as Kawakubo, Yamamoto, Issey Miyake and Kenzo Takada as well as young designers who are making dictating new trends on the streets of Tokyo’s Harajuku neighborhood. One gallery featured the collections of Western designers who have been inspired by Japanese fashion.  The exhibition is taken from the Kyoto Costume Institute.