I first found out about the Museum of Modern Art‘s “Good Design” programs while doing research in the MoMA library’s archives years ago. Since then, I have been waiting for an exhibition dedicated to exploring the role that the museum played, during the mid-twentieth century, in defining “good design” for the public. And finally, here it is: “What Was Good Design? MoMA’s Message 1944–56” is on view from May 6-November 30, 2009 at MoMA. After all, these programs were a vital part of the museum’s history and deserved recognition. According to the organizers, “good design” was functional, affordable and served a real purpose in the home. Fast forward sixty years and stores like Target and Design Within Reach are trying to bring good, affordable design objects to the masses. Interestingly enough, a lot of the furniture sold at DWR today was once honored at these design competitions and exhibitions.

These “Good Design” programs, spearheaded by MoMA’s then-curators, were geared towards the modern housewife who was inundated daily with new mass-produced objects. The curators believed that, by organizing these exhibitions and competitions, they would educate the public and “stimulate appreciation and creation of good design from manufactures.” In the 1940’s, for example, design enthusiasts relied on an annual exhibition like Useful Objects, organized by John McAndrew who was the curator of the Department of Architecture and Industrial Design, as it was then known, from 1937 to 1940. Objects featured in the exhibition, all of them available in stores, were meant to provide inspiration for designers and consumers alike. Eliot Noyes, the director of the Department of Industrial Design (a prior designation of the Department of Architecture and Design) from 1940 to 1942 and then again from 1945 to 1946, organized the Organic Design in Home Furnishing Competition in 1940. Eero Saarinen and Charles Eames won for their design experiments with bent plywood that were exhibited at the museum the following year.

The programs were also open to international artists as MoMA was interested in promoting international design in the United States, which they believed was important to the development of modern design overall. They proved to be correct as some of most renowned designers from abroad contributed to the exhibitions. The Gio Ponti designed “Leggera Side Chair, Model 646” (1951), and Hans Wegner’s “Armchair” (1960), also known as the “Chair” that was used during the Presidential debates between JFK and Nixon, are just two examples. Edgar Kauffmann Jr., who became director of the Department in 1946, organized the International Competition for Low-Cost Furniture Design in 1948. He encouraged designers to use technological advancements in all areas of design and had the winning entries manufactured. Kauffmann also oversaw the Good Design program from 1950-1955 which consisted of three exhibitions every year in New York and Chicago’s Merchandise Mart. This was a landmark of sorts because this was the first time that a museum and a retailer collaborated. The objects selected in these design competitions were intended to influence the market for design in the United States. Which they certainly succeeded in doing.

Other icons of modern design, featured in the current exhibition, include the Eames’ Storage Unit (“ESU,” 1950) and chaise longue (“Le Chaise,” 1948) as well the “B.K.F Chair” (1938) by Jorge Ferrari, Antonio Bonet, and Juan Kurchan, and George Nakashima’s “Three-Legged (Mira) chair” (ca. 1950) that was one of his earliest designs and named after his daughter. While furniture was the most important aspect of these programs, works of smaller size and varied function also received attention. The range of objects and the quality is mind boggling, just think that Eva Zeisel’s “Museum Dinner Service” (1942-1945) was commissioned by the same curators that selected Earl Tuper’s “Tupperware” containers (ca. 1945) “as a powerful symbol of suburban domestic life in the 1950’s.”

It is fun to see some of the most commonplace objects in a museum exhibition. The curators believed that these well-designed but nondescript objects belonged in our homes. These include a cheese slicer, broiler, hamper, “minimesh” wastebasket, tea kettle, sewing machine, shrimp cleaner and an orange juice squeezer, just to name a few! My favorite part of the exhibition is the period pamphlets, photographs, advertisements and magazine articles promoting the shows during the 1940s and 1950s, as well as the panels that designers submitted to the design competitions. Wandering through the exhibition, it is hard to imagine that at some point these objects were unknown to the larger public. 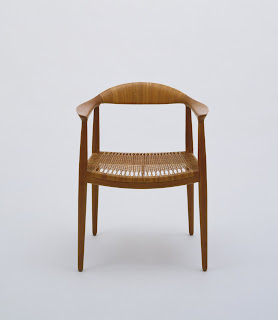 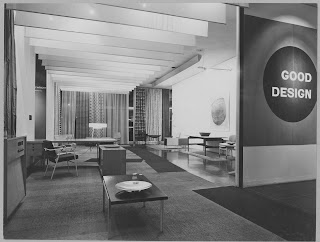 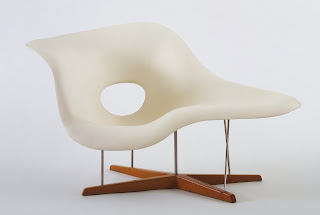 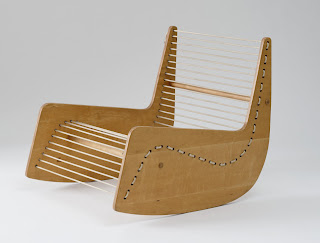 Alexey Brodovitch. Floor Chair (model 1211-C). c. 1950. Plywood, wood dowels, and plastic-covered cord. 23 3/4 x 23 1/2 x 28” (60.3 x 59.7 x 71.1 cm). The Museum of Modern Art. Gift of the designer.
I was especially excited to see this chair featured in the exhibition. This chair reminds me of a simplier version of Russian folk-art furniture. Alexey Brodovitch was the influential art director of Harper’s Bazaar and also taught a course called Design Laboratory at the New School for Social Research. Richard Avedon was one of his students at the Design Laboratory.