In the “Russian Style”: Shutov’s “Arch, Axe and Gloves” Chair 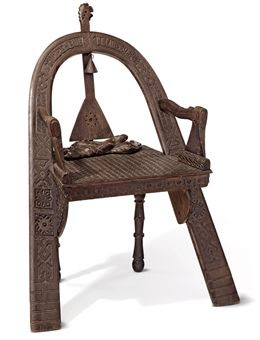 I always scan the Russian auction catalogues in search of great examples of Russian decorative arts. While I can always get a wide selection of silver, porcelain, and jewelry, I rarely find furniture. This is the reason that I was so excited to see this chair auctioned off at the Christie’s Russian sale on April 23.

Made of carved oak, this trompe l’oeil chair (lot 243), after a design by V.P Shutov, is part of museum collections around the world. The curved backrest and the front legs are in the form of a decorated yoke, carved into the backrest is the old Russian saying ‘Tishe edesh’ dal’she budesh’, which loosely translates as “the quieter you go, the further you’ll get”, the arms are carved as axes set in logs, and the seat carved en trompe l’oeil resembles a pair of gloves resting on woven matting, the backrest has a balalaika with a rooster’s head and a wooden bell. It is no wonder that with all of this traditional folk imagery, this chair happens to be one of the most famous examples of Russian decorative furniture.

According to the exhibition catalogue, “The original ‘Arch, Axe and Gloves’ chair, inspired by Russian national folk furniture of the 17th century, was first produced by Vasilii Shutov and exhibited at the All-Russian Manufacturing Exhibition in St Petersburg in 1870. It is probably from this original model, which inspired numerous later versions produced throughout Russia and remained popular for four decades, that the present lot takes its distinctive design. Emperor Alexander III reputedly purchased a similar chair and an example exists in the Hermitage Collection (no. ERMB-481).”

I tried to locate additional information on Shutov but all I found was that the designer was also the owner of the St. Petersburg workshop where this chair was produced and that he eventually became a lecturer at the Baron Stieglitz Art College, this according to the Hermitage Collection’s website. The Art College is today known as the Stieglitz St. Petersburg State Academy of Art and Industry and it is recognized as one of the most prestigious art universities in Russia.

However, while beautiful in its construction and Russian in its iconography, there have been so many other wonderful examples of Russian furniture produced that it makes me wonder why this chair can be frequently found at auction but other great pieces are not available.

This made we remember my trip to Moscow several years ago and the wonderful furniture that I discovered while visiting museums there. Stay tuned for these images, which proved to be my most valuable souvenirs, as I will share them with you later in the week.