IT’S SHOW TIME AT THE ARMORY!

The International Fine Art and Antiques Dealers Show at the Park Avenue Armory is a wonderful spectacle, a treasure trove of beautiful things. The fair features dealer offering antiquities, old books, paintings, decorative objects, furniture, and fine jewelry. The show, in its 21st year, has welcomed new dealers this year due to the weak economy that has forced some dealers to stay home. However, inside the armory one would never know that there is a recession outside. Attendance has been overwhelming and judging by the happy smiles on dealers’ faces, sales are not a thing of the past. This year there is a strong presence from galleries specializing in twentieth-century decorative arts. New dealers such as Galerie Lefebvre of Paris, Primavera Gallery, Jason Jacques, and Bernd Goeckler Antique, all of New York, have brought the very best of what they have to offer. Primavera’s elegant booth is home to notable pieces such as the white onyx sculpture titled “Woman Bathing” by the French sculpture Pierre Traverse (ca. 1928-1930) and the equally breathtaking beauty of Jean Dupas’s “La Danse,” an early drawing for the renowned Art Deco artist, she is from 1920 and hints at the ensuing modern art movement that is to come during the next five years, culminating with the 1925 Paris exposition which gave the Art Deco its name. This drawing is also remarkable because it is a study for a larger work, “Le Pigeons Blanc” that has since been lost. Also of interest is the incredible sideboard by relatively unknown artist-sculptor Claude Santerelli made of solid macassar wood and decorated with brass panel reliefs (ca. 1960), a beautiful combination of smooth and rough textures. And an exquisite Philip Lloyd Powell carved walnut sideboard that hasn’t been seen in this country since the client, an American diplomat living in Paris, shipped it there shortly after Powell made it for him in the 1960’s. The walnut sideboard was one of the first pieces sold by the gallery on opening night. 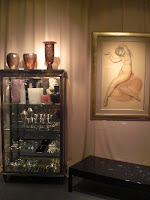 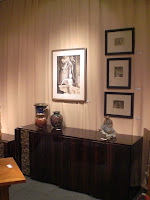 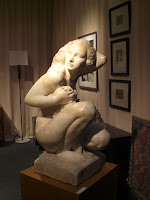 The theatrical booth of “pot dealer” Jason Jacques is fabulous. Jason’s love for ceramics is evident in his artful displays and his enthusiasm for the subject is contagious. The Zsolnay snake called “Venom” (ca. 1900), which also doubles as a pitcher, comes from the collection of Yves Saint Laurent. This functional sculptor is incredibly beautiful and the shine on the scales of the snakes head is characteristic of the iridescent glaze, known as “eosin,” that the company has been famous for since 1853. As a furniture lover myself, I am taken by the large white sideboard and the dark vitrine on display. The white wooden sideboard (1909) with pigeons on the door handles are by the Swedish architect Ragnar Östman and the Jugendstil vitrine of wood and copper (1901-1902) is by Patriz Huber, who was one of the central figures of the Darmstäd Arts Colony. 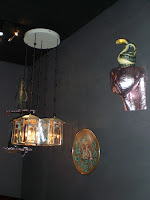 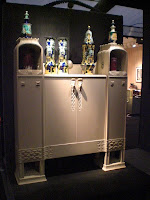 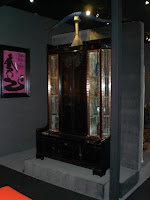 A magnificent Paul Evans three-panelled patinated steel room divider (1957) hangs on the wall of Bernd Goeckler Antiques. The Evans piece finds its home opposite a striking Carlo Bugatti shelf in the Moorish style from 1900. Goeckler’s booth is one of the most dramatic at the Fair, and has a lot to offer to potential clients. A particularly wonderful arrangement included the fourteen hanging Art Deco chairs (1935) by Alfred Porteneuve. While these fabulous chairs have already found a new home, they can still be seen until Thursday. While not a household name, Porteneuve was Jacques-Emile Ruhlmann’s nephew and took over the company after the great designer’s death. 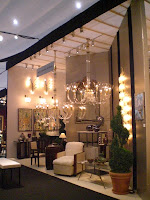 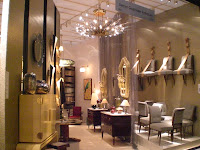 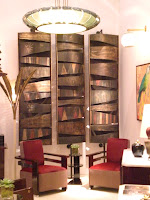 Galerie Lefebvre always brings important pieces representative of the French Art Deco period and can be counted on to assemble a beautiful and sophisticated booth. The main attraction this year is the marble sculpture titled “Woman (Hommage à Jean Goujon),” from 1924, by Alfred Janniot. This sculpture is the final study for the central figure of the trio of women that make up the “Hommage à Jean Goujon,” another very important sculpture by Janniot. “Woman” was also created while Janniot was at the Villa Medici and was exhibited at the entrance of the Hotel de Collectionneur at the 1925 Paris Exposition. Dupas and Janniot are both associated with the Bordeaux school and met when they were both at the Villa Medici, after receiving the prestigious Prix de Rome. Dupas once said that Janniot is able to give his paintings a new life by carving them out of stone. The almond eyes and wavy hair of this beauty are both characteristics of a Dupas woman. 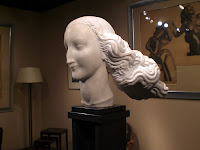 The selection from other 20th c decorative arts dealers is also very strong. For example, Maison Gerard Ltd. has done a superb job recreating a boudoir furnished by Maison Leleu. The interior is a throwback to a time that has been long forgotten, that is when women had boudoirs and also when a piece of furniture was a work of art. Jules Leleu was one of the most important French furniture designers of the 1920s through the 1960s. Leleu employed both of his sons and his daughter and the company benefited not just from their business acumen but also from their design sensibilities. The pieces in the booth are from different time periods but they are all in harmony with each other. Each piece is more breathtaking than the next. But the pièce de résistance is the two door walnut cabinet with ivory sabots, and mother of pearl, and ebony inlays by Messager (ca. 1925). The walnut cabinet is ornamented with ivory and ebony flowers, it is like a beautiful couture dress with embroidery by Lesage. This cabinet is one of Leleu’s most famous pieces and has been extensively exhibited and illustrated. Another favorite of mine is the incredible, and massive, cabinet made of mother of pearl and ebony rosewood with gilt bronze ornaments (1945). This monumental cabinet, due to its size and beauty, took 1,600 hours to complete. 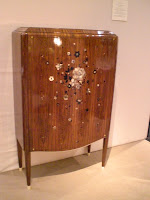 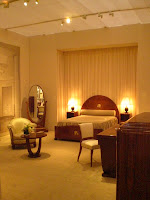 The transformation that the armory undergoes in preparation for a show is remarkable. While it takes days to setup before the show, it is all torn down in a matter of hours on the final evening and packed away in hopes of finding a home for the beautiful unsold objects next year. The fair concludes on Thursday night and if you have not yet seen it, you are missing out.