September 27, 2011 3 comments Article Art Deco, Auction, Christie's
I was really excited when I found out that Christie’s in Paris will be holding a large sale of items dealing with the Orient-Express. As you know, I have a soft spot for the train and have written about my private tour of the train here and its history in the spring 2011 issue of Modern magazine.
Now it is possible to own a piece of this incredible train which has such a fascinating and rich history (not many know that on November 11, 1918 Marshall Foch received Germany’s surrender while sitting in one of the Orient Express cars and in June 22, 1940, Hitler pulled the same train out of the museum to receive France’s surrender)! 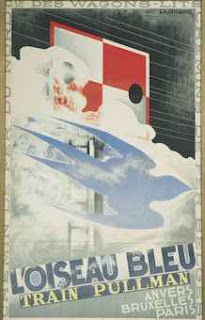 On September 27th 269 lot will make up the sale called “L’âge d’or du rail – Souvenirs de la Compagnie Internationale des Wagons-lits”. A good portion of the sale consists of posters commemorating the various voyages and cars of the Orient Express by such giants such as Cassandre, Guy Georget, and Joseph Daviel de la Neziere, whose poster “Simplon-Orient-Express, Alep” (1927) is illustrated in my article and part of this sale. A favorite of mine is Cassandra’s 1929 poster for L’Oiseau Bleu (lot 117 (€2,500 – €3,500) is a beauty and a tribute to the Ibis, a kitchen car decorated with marquetry medallions of Greek dancing girls.  Its blue interior inspired Serge Diaghilev to commission the ballet Le Train Bleu. 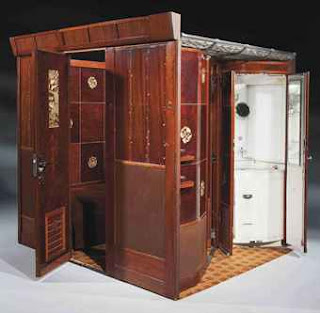 Some of the best craftsmen of the 1920’s worked on the interiors of the train which can now be part of any interior. The sale features an important collection of architectural fittings from the train such as original Morison African mahogany marquetry panels, sold in singles or a set of seven (lot 166, €8,000 – €12,000), as well as René Prou’s doors and toilets from his Luxe model cabins (lot 214 and 215, €1,500-€2,500 and €7,000-€10,000). Most impressive is an entire Prou single compartment made of African and Cuban mahogany with a decorative floral inlay (lots 211 €12,000-€18,000). Prou was responsible for the design of four-hundred train compartments for the Compagnie Wagons-Lits from 1926-1929. The ones being offered by Christie’s are from 1929. The compartments included a seating area with a divan with crème colored upholstery decorated with geometric patterns, considered very chic for the period, and a sleeping area with a pull down bed bunk and a mahogany night table.  They also had a personal washbasin in the corner of cabin which was hidden behind bowed lacquered doors. Some sleeping cars had extra large lavatories with a large sink and a marble counter-top. 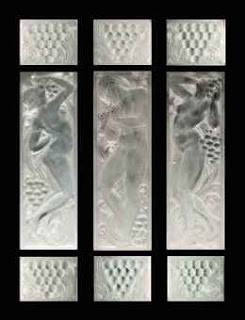 The other artists that left a large imprint on the design of the train was René Lalique. The glass artisan’s molded glass panels, Figurines et Raisins, from the Cote d’Azur Pullman Express (lot 143, €40,000-€60,000) – are identical to the ones in the collection of the Virginia Museum of Fine Art. These molded clear-glass panels of “Bacchanalian maidens”, or nude neo-classical figures holding grapes, with smaller molded glass panels of grapes and vines, were set into mahogany.
The sale also includes furniture, silver-plated dinner and dessert services, and models of the trains and compartments.
The cover of the lavishly illustrated catalogue features a close-up shot of the blue train with the affronted lions brass crest- because even if one has never seen the exterior of this famous train, we can all recognize its famous medallion.
It would be interesting to find out who is selling all of these items and who will be buying them. Will the current owners of the Venice Simplon- Orient-Express purchase cabins and add some additional trains or will museums around the world try to capture a piece of history for themselves? Or perhaps it will be people who want a little piece of Orient-Express’s mystery and romance for their own homes? Whatever the case may be- these are souvenirs worth buying.
For more information on the sale visit Christies.com