Not To Be Missed: Alexander McQueen: Savage Beauty 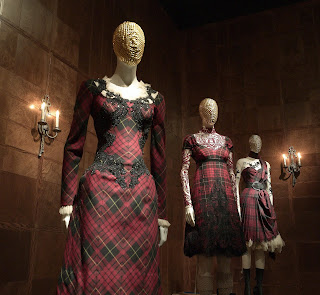 Andrew Bolton, the curator of the exhibition, equates McQueen’s talents and sensibilities to that of a “painter or writer of the Romantic Movement…(who) associated unfettered emotionalism with the appreciation of beauty. “ Bolton chose to present McQueen’s works not chronologically but thematically. He takes the attributes of the Romantic Movement – individualism, historicism, nationalism, exoticism, primitivism, and naturalism – and applies them to the designer’s work. The result is a deeply moving and beautiful ode to one of fashion’s most unconventional geniuses.

It is evident from the work on view that McQueen was not just a showman as each collection delivered a message. McQueen’s influences ran the gamut from history, nationalism, exoticism, art, film, and nature. Each breathtakingly beautiful ensemble was instrumental to the telling of his story.

Like the artists of the Romantic Movement, whom Bolton compares him to, the designer’s most futile influence came from the nature. McQueen often used elements from the natural world, instead of conventional fabrics to get his point across. Claws, feathers, sequins, lace, antlers, embroidery, clamshells are all part of his repertoire. 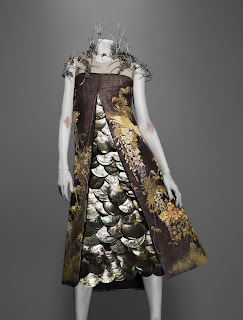 The clothing in “Savage Beauty” steals the show. But it is also hard not to notice the theatrical exhibition design. This is very fitting for a designer who did not believe in sending models down a simple runway. Bolton says that it was inspired by the nineteenth century Brothers Grimm fairytales. Each room is meant to evoke a new chapter in this deeply Romantic and dark fairytale.

“Savage Beauty” does not just present to us McQueen’s creations but also the creations of his collaborators. For McQueen was interested in a complete look, from head to toe. Hats by Phillip Treacy and jewelry by Shaun Leane are artfully presented in a gallery called the Cabinet of Curiosities. McQueen once said, “I don’t really get inspired [by specific women]. It’s not like you see a beautiful woman and she becomes your muse. It’s more in the minds of the women in the past, like Catherine the Great, or Marie Antoinette. People who were doomed. Joan of Arc or Colette. Iconic women.” It is unfortunate that McQueen was one of those doomed people too. The designer, who committed suicide on February 11, 2010 at the age of 40, will no longer be able to tell us another story nor shock us- and for this he will be greatly missed. 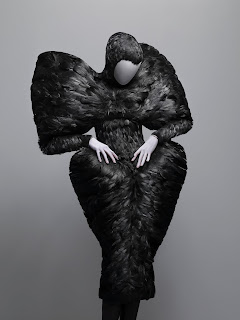 *Since the exhibition has received so much attention and the crowds have been coming in droves, the museum has decided that, from August 4 to August 7, the exhibition will remain open to the public until 9 p.m.