Not to be Missed: “Color Moves: Art & Fashion by Sonia Delaunay” at the Cooper-Hewitt through June 19th. 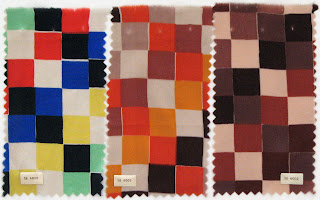 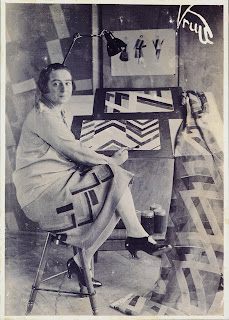 It is hard to believe that in thirty years no museum in the United States has dedicated an exhibition to Sonia Delaunay’s work. Therefore the Cooper-Hewitt, National Design Museum’s exhibition, “Color Moves: Art & Fashion by Sonia Delaunay” is much welcomed. The exhibition explores two decades in Delaunay’s career that were her most productive: the 1920’s when she was living in Paris and designing for her own fashion atelier and the 1930’s when she was submitting textile designs to Metz+Co. Department Store in Amsterdam.

Delaunay led a charmed life. Born Sarah Stern in a small village outside of Odessa, Ukraine, in 1885, Delaunay was adopted by her wealthy uncle, Henri Terk when she was just five and went to live with him in St. Petersburg. Educated in the best schools in Russia and then Germany, Sonia, as she was known post-adoption, moved to Paris in 1905. In 1907 she met the painter Robert Delaunay, whom she eventually married in 1910, already seven-months pregnant with their son, Charles. Sonia and Robert’s relationship was intellectual as much as it was romantic. The two artists held similar beliefs on art and were especially interested in the principles of light and color. They formulated a theory about color expressed through simultaneity- the sensation of movement created when contrasting colors are placed side by side. Therefore color, rhythm, and simultaneity became the guiding principles of her art.

Delaunay’s first foray into the design of textiles was quite accidental (although she had been studying embroidery for several years prior to this). In 1911, she combined multi-colored patches to create a quilt for her newborn son. She found the abstract pattern on the piece of cloth very modern looking. Delaunay designed her first dress, robe simultantée, or a simultaneous dress, in 1913. In principal this dress was very similar to the blanket. Delaunay sewed patches of cloth onto a dress and wore it out to a party. This dress became her trademark and the catalyst for her future designs.

World events led the Delaunay’s to leave Paris and she opened her first business, Casa Sonia, in Madrid. 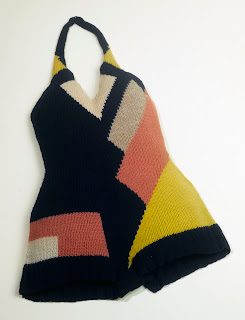 Once the Delaunays returned to Paris, she opened Maison Delaunay in 1925. The fashion label was part of her Atelier Simultané, which was a workshop through which she produced fashion, textiles and accessories.

The clothing and accessories on view in “Color Moves”, everything from coats to bathing suits, to hats indicate that her real talent lay in design of textiles. Bold and bright geometric prints and wild floral patterns bring to life the traditional, and somewhat boring, silhouettes. She masterfully blended together colors and combined tones, brown became gold and red became orange. In fact when Maison Delaunay closed in 1929, records show that it was the designer’s textiles, and not her fashions, that proved to be financially successful. 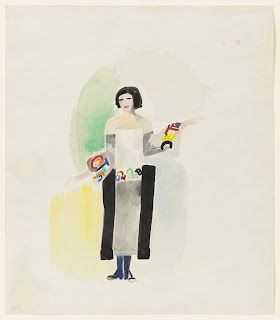 The exhibition presents to us a wide range of materials: clothing, textiles, sketchbooks, and photographs. It really allows us to familiarize ourselves with Delaunay’s work, although it does not place her in a larger context of fashion/textile designers working in Paris during this time period, we are still left with the understanding that her contribution to the design of textiles, really more so then fashion, was tremendous. Delaunay continued to design textiles under the name Tissus Delaunay after she closed her fashion atelier. A collaboration with the department store Metz+Co. proved to be very fruitful (it lasted through the 1960’s).

One of the exhibitions’ ingenious moments is to show that Metz +Co. was not just a department store but a serious venue for the latest trends in modern design. One of their earliest design collaborations was with the British department store, Liberty of London in 1902. But the shop also supported its own Dutch designers like Gerrit Rietveld, who designed a space within the shop exclusively for the exhibition of modern design.

Delaunay summed up her own success when she wrote in a letter to the owner of Metz+ Co: “Our position in life and its evolution are important and unique because, parallel to important developments in art, we introduced art into daily life. … This contributed greatly to the comprehension of modern art, which became more accessible and understandable through my fabrics, which for me were exercises in color.”