Not To Be Missed: Daphne Guinness at the Museum at FIT 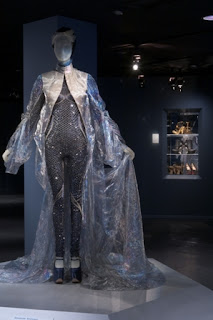 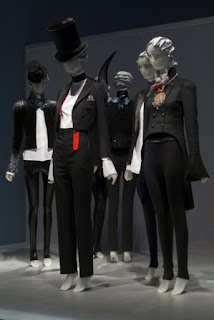 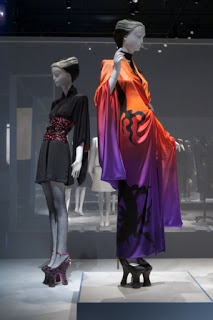 It is not everyday day that we get a peek into the closet of someone described by Tom Ford as “one of the—if not the—most stylish women living.” As Valerie Steele, curator of the exhibition points out, there have been numerous exhibitions dedicated to fashion designers, but only a few devoted to style icons (we can really count the number on our fingers: Jackie Kennedy, Nan Kempner, Iris Apfel, Mona Bismark, Grace Kelly and Tina Chow). Why should we care about Guinness? Who is she? Does not every wealthy woman have a closet full of couture? The answer, as the exhibition proves, is that Guinness is more than just a style icon but a muse and an artist. Guinness does not simply get dressed because she cannot leave the house naked but someone who takes pride in her clothes, who respects the craft and as Hamish Bowles writes, finds poetry in them.

Born in 1967 the Honorable Daphne Suzanne Diana Joan Guinness is heiress to the Guinness brewery fortune. Her paternal grandmother was Diana Mitford who, along with her sisters, was quite notorious during the last century. In 1987 Guinness married Spyros Niarchos, the second son of the shipping tycoon Stavros Niarchos. They had three children and divorced in 1999. Daphne, leaving behind their gilded life, decided to start fresh and resumed her maiden name. Since then she has started to build a reputation for herself outside the confines of her two last names. This reputation has been cemented on her love of fashion and her support of young designers.

Walking through the exhibition, which is very dark and sexy, clothes on mannequins made to resemble Guinness are placed behind scrims surrounded by mirrors, and was inspired by Guinness’ New York apartment, one is immediately struck by how distinct Guinness’ look is. The exhibition is spilt into six sections (Dandyism, Armor, Chic, Evening Chic, Exoticism, and Sparkle) yet all of these are blurred. Guinness’ attire can be summed up in this way: over-the-top Goth. Of her own style, Guinness says that her go to outfit is a black jacket, leather leggings worn with white blouse, accented with sparkles and lots, and lots, of diamond jewelry. And shoes. Wild, ski-high platforms. Some are missing the back heels, other with heels so sharp that they can be used as a weapon.

Even as a young girl, Guinness had her own sense of style. She loved uniforms, wishing that she could wear suits like the boys, but when Guinness was not in uniform, she shopped at London’s Kensington Market worshipping the punk rockers and hoping to dye her hair black and red. “I was in leather from head to toe whenever possible”she recalls. As a teenager she preferred black taffeta dresses (angering her headmistress when she chose to wear one to her confirmation) and Azzedine Alaïa’s skimpy leather creations. For a short period of time she studied sewing in school but got bored and dropped it. A promised internship with Madame Grès, Guinness’ grandmother was her good friend, never materialized. Her first couture dress was one of Christian Lacroix’s famous bubble skirts, in pony skin, from 1987.

Guinness famously had a close relationship with Alexander McQueen. The late designer’s clothes, including never before seen ensembles, account for a large portion of this exhibition. Isabella Blow, the style editor and a fashion icon in her own right, first told Guinness about McQueen. As the now famous story goes, Blow is credited with discovering the designer having purchased McQueen’s entire graduation collection from Central Saint Martins for £ 5,000. However Guinness and McQueen met accidentally and became fast friends. Their circle included Blow, fashion photographer David LaChapelle, jeweler Shaun Leane, and milliner Philip Treacy. Both Leane and Treacy frequently collaborated with McQueen and their work is also part of Guinness’ collection. A fabulous dress/coat with a black dragon on the back, made by McQueen while he was at Givenchy, sparked their friendship and was one of the first pieces that she purchased of his.

Other designer’s whose work the style maven admires are Gareth Pugh, Karl Lagerfeld (especially his clothes for Chanel), and Valentino. She also, has from time to time, designed her own clothes. Her own creations have masculine tailoring but are still sexy and feminine. Guinness’ take on fashion is that one must have fun with it. This is entirely evident in a cut-up lycra dress and hooded coat that Pugh designed for her. Another show stopper is a McQueen cat suit made of gold and bronze beads woven onto a nude silk net with a black feather cape. One thing is for sure, Guinness knows how to make an entrance. What drives Guinness’ fashion tastes is individuality. Guinness feels that “Fashion today is becoming more beige. By that I mean that everyone and everything is starting to look the same – almost like a Mao uniform. We should be flying the flag for individuality.”Not surprisingly she admires women who also were individuals like the Duchess of Windsor, Jean Seberg, and Jean Tierney, as well as flamboyant rockers David Bowie and Jimi Hendrix.

Women often say that they don’t dress for men but for other women. With Guinness that is only partly true, she dresses for herself, and other women. While her look can be described as sexy, it is not conventionally sexy. Valentino likes her to a “extravagant, sexy, luscious, marvelous flower…”

No matter the ensemble, sequence and lace are mandatory. It is hard to distinguish between day wear and evening wear, although Guinness claims that such distinctions do not exist in her world. One should wear what one likes. A Chanel jacket with white sequence and white feathers on the shoulders or a Valentino coat with a fur collar are both elegant and refined. Yet paired with leather pants they will be truly a Guinness original.

To call Guinness a clothes horse would simple be unfair. She is a collector of haute couture (she acquired Blow’s couture collection before it was to be auctioned off by Christie’s in 2010) comparing herself to car or stamp collectors. Her goal is to share her collection with students interested in the craft as much as she is. “What draws me to fashion is art…and certainly not fashion as a status symbol.” This love and passion she says is the reason that she agreed to this exhibition, “This exhibition is done for the benefit of those out there, students or otherwise, who share this love.”

The exhibition is set to close on January 7th. All of the installation shots are courtesy of the Museum at F.I.T