On the Hunt for Bakelite…at Bonhams in New York

In one of my past blogs I confessed to collecting Russell Wright dinnerware. But Russell Wright is not the only thing that gets my collecting juices flowing, Bakelite is another. As someone who works in the decorative arts field, I look at beautiful things daily but most of them are unattainable (for me, at least). However, a collector by nature, over the years I have fallen in love with Bakelite jewelry. It fulfills all of my requirements for collecting: it is affordable enough, easy to find ( although offers a chase for the really good pieces), and practical because I do not need to put it away, like a rare book, but wear it and, most importantly, find pleasure in it. Last week I was able to put my knowledge of Bakelite to use 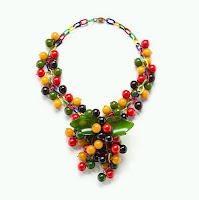 and even place my first bid with an auction house.

Last Wednesday, on December 16, 2009, an auction took place at Bonhams in New York and Los Angeles. The sale consisted of about 300 pieces of Bakelite jewelry from the Collection of Susan Kelner Freeman. I do not know Ms. Kelner Freeman personally but read in a recent NY Times article that she was once an advertising exec and began to collect Bakelite when she was in college, in the 1960’s, and bought it for $3 in the Village. Her collection had been amassed over 40 years. I must admit that to find Bakelite for $3 these days is impossible and while you can find it at reasonable prices, rare and intricate pieces can cost over a 1000 dollars. Bakelite has become rather popular since the early 1900’s, when it was first discovered by Dr. Leo Baekeland. It was an “accidental” discovery for the scientist who was trying to find a formula for a variation on plastic. Patented in 1907-1909, this new material, similar to plastic, could be cast or molded. Also, different pigments could be added to produce a rainbow of colors. Marketed as a “material of a thousand uses” various everyday appliances could be made of Bakelite, including jewelry. Bright, beautiful and cheap it was the perfect accessory to any woman’s attire in the 1920’s and 30’s and remained popular during the Depression because it was inexpensive.
Having recently added three beautiful pieces to my collection, two carved bangle bracelets and a domed ring, I was looking forward to acquiring some more at the Kelner Freeman sale. The estimates were very reasonable, perhaps even a bit low but that only made me want to bid more. In fact, in that same NY Times article, Virginia Salem of Bonhams stated that the auction house is looking to attract a new and younger crowd to the auction house, so perhaps these estimates were part of the ploy. Anyhow, I bid on three deliciously whimsical pieces: a painted “Humpty Dumpty” brooch, a multicolored berry necklace and brooch, which could also be worn as a pendant, and, lastly, a carved green bead necklace, which even though part of the Bakelite sale was not Bakelite. Upon inspection of the piece I realized that this was possibly nothing more than plastic but the beautiful carving and the hidden clasp in one of the beads, as well as a “Made in England” stamp, made be covet it. The preview was a great opportunity for me to get up close and personal with the collection and even rub the pieces to get 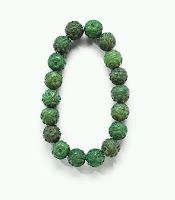 a whiff of that formaldehyde smell (formaldehyde is one of the ingredients in Bakelite), which is often associated with real Bakelite and is an easy test to conduct when not sure if you are looking at the real thing. For serious collectors, not novices like myself, the sale featured some very interesting and unusual pieces. Many of the brooches explored themes like sports, school, animals, and the war. There were also fabulous portraits and heart and arrow brooches. Some of the pieces were even articulated, like the hands on a cowboy brooch or the arm of a monkey grasping a banana. The bangles were beautifully craved, some hinged, and some with animals decorations, like birds, dogs, and various sea creatures. The bracelets and necklaces had the loveliest fruit charms hanging of off them. Ms. Kelner Freeman certainly amassed quite a collection! At some point she even decided to start collecting celluloid (a semi synthetic plastic invented in the late nineteenth-century) which is also featured in the sale in the form of int 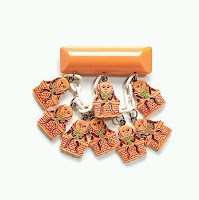 ricate bangle bracelets.
I am sad to report that none of my bids were winners at the sale. The final prices were tremendous in comparison to the estimates. Even the beaded necklace managed to bring in $1220, double its estimate of $400-$600.Alas, my search for the next piece of Bakelite continues. I know that I can always count on dealers at the Pier Antiques Shows in March to tempt me with some pretty pieces but I enjoyed my experience of bidding and perhaps when the next auction rolls around, I’ll be ready to buy and not just to report.
All images courtesy of Bonhams.