I try not to write about contemporary design on this blog but sometimes an event is too good to ignore. Last week I had the pleasure of attending Daniella Ohad’s interview with Roan Arad at the 92nd Street Y, in New York, as part of the Dialogues With Design Legends series. I know Ms. Ohad well and was looking forward to the smart and insightful questions that she would ask Arad. I am familiar with Arad’s designs for furniture and cutting edge architectural projects but I have never heard him speak. I had been warned, though, that Arad was a character. Since the man’s current mid-career retrospective at the MoMA is called “No Discipline” (August 2- October 19, 2009), I was prepared for his antics. The night’s program was slightly unorthodox because Ms. Ohad asked Arad to prepare a presentation on his career, an hour during which the lucky crowd was charmed by the designer and got a real insider’s look at the design legend and his work.

While it has been written about extensively, to hear Arad recount stories about his first sale of the “Rover” chair (1981) for 99 GBPs, to Jean Paul Gaultier is a treat. In fact, he did not make much of a profit on the sale as the car seat, the seat of the chair, cost him slightly less at the scrap yard where he bought it. Arad discussed all of his projects in detail, sometime showing his studies for the piece and revealing what inspires him. His ideas come from everything that has happened up to three years ago and the things that he grew up. He is definitely not inspired by revivals of art historical movements, anything with a “Neo” as its prefix is bad news according to the designer.

The designer also discussed at length his mid-career retrospective at MoMA, a stunning exhibition designed by Arad and his team. Like his work, it is bold, showy, technologically advanced and, in some ways, conceptual. Instead of wall labels, there are flat LCD panels that project information about each piece displayed and provide you with a 360 degree view of it. Arad is an outspoken designer, to say the least, but the t-shirt that he was wearing that night best sums up his attitude towards such museum exhibitions, it read “I don’t want not retrospective.” Therefore the designer needed to create something new for the show, something to keep it fresh. As pedestals were not an option for him as a tool of displaying his work, Arad built a giant cage (aptly titled “Cage Sans Frontièrs,” 2009), located in the center of the gallery, as a display, and according to Arad, it was his way of keeping the exhibition interesting, for himself and the visitors alike. For those visitors that are not lucky enough to own one of his creations but still want to know what it feels like to sit in one of his chairs, Arad has placed his “Do-Lo-Rez” sofa (2008) outside of the galleries for visitors to lounge around in. For Arad, the experience is just as important as the piece itself. Arad’s work commands high prices on the auction market but the designer believes that people can consume art without buying it. Visiting galleries, looking through books, and going to the MoMa is the best way to consume Arad’s work without spending money on it. The designer’s work is also mass produced by Vitra, Kartell, and Moroso making it more accessible for those who cannot afford an original. And while Arad is very passionate about industrial production and has no problem creating limited edition pieces. In fact, an edition is usually closed when the designer gets bored with the piece.

Arad’s latest and greatest project is the Design Museum in Holon, a city just outside of Tel Aviv. Arad recounted that during one of his first meetings he was asked if he could design a building that the government can be proud enough of to place it on a postage stamp. The city is hoping that Arad’s building for the museum will have the same effect on Holon as Frank Ghery’s design for the Guggenheim in Bilbao. Made of the bands of Cor-Ten that create loops around the façade, the structure is incredible. Arad pointed out that what makes his museum so different from the Guggenheim Bilbao is that its rectangular galleries are curator friendly and allow for the easy installation of artwork. Arad also believes that” a good building remains a good building, long after the people that commissioned it are gone.”

The evening concluded with Ms. Ohad’s questions, during which time she asked the designer his opinion on design objects as art- a topic Arad doesn’t like and feels that it has been made complicated by gallery dealers and auction houses, who decide what design is and what art is. Arad explained that the definitions are unnecessary and that “a chair should not have an identity crisis.” The evening concluded with Ms. Ohad playfully asking Arad if he had fun with the audience, as he easily interacted with them all night, and as a sign that the audience had fun with Arad, they ran up to him for autographs and photos after the lecture.

The next event in the Dialogues With Design Legends series will be a conversation between Karim Rashid and Gaetano Pesce, moderated by Martin Filler on Tuesday, Nov 3, at 8:15 pm. 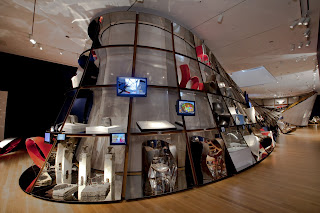 Installation view of “Ron Arad: No Discipline” at The Museum of Modern Art.Photo: Jason Mandella. 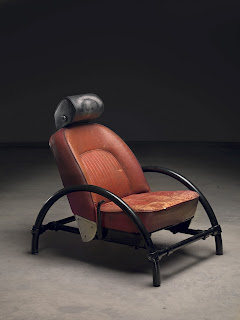 I apologize for my paparazzi-like photo of Ron Arad but this is all that I could get without including the audience around him. Arad’s hat recieved a lot of attention in the beginning of the lecture.