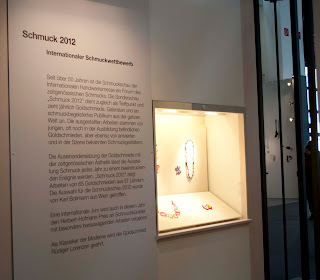 Schmuck 2012 (March 14-20, 2012)
Earlier this month I traveled to Munich with the Art Jewelry Forum (www.artjewelryforum.org) to attend Schmuck(Jewelry), an annual jewelry exhibition that takes place in conjunction with the International Trades Fair. Schmuck is the oldest contemporary jewelry exhibition in the world. It was started by Herbert Hofmann (1899-1971) in 1959 and since then has long been considered the most important venue for jewelry artists to show their work. In 1973 the Trade Organization started giving out the Herbert Hofmann prize to three participating jewelers.  This year approximately 665 applications were received from 35 countries. Dr. Karl Bollman, a jewelry collector from Vienna, was chosen to preside over the show and selected 65 jewelry artists to participate. According to the show catalogue Dr. Bollman’s criteria for choosing pieces for the show were based on “lucid form, wearability, and artisanal quality.”  Surrounding Schmuck is an overwhelming number of smaller gallery shows and museum exhibitions.

With my AJF group, consisting of gallery owners, makers, and collectors, I spent an intense, but unforgettable, 72 hours looking and breathing nothing but jewelry. Over the course of this week, and in three installments, I will publish my Schmuck 2012 diary.

DAY ONE: Thursday, March 15, 2012
Galerie Biró
Our day started with a trip to Galerie Biró to see artist Lisa Walker’s most recent show called “Glee.” At the Galerie we met with Walker and its owner, Olga Zobel-Biró, who spoke to us about contemporary jewelry and gladly modeled for us Walker’s work. Since it was an (early) morning visit we were treated to OJ to go along with our discussion. Walker’s whimsical, often large, jewelry consists of found objects that the artist has picked up during her travels. What inspired me about Walker’s work is that no two pieces were alike and, unlike other artists, there was not one theme that work adhered to leaving me to believe that she is an artist that follows her whims and allows the materials to guide her creative process.
For more: Lisa Walker:  http://www.lisawalker.de/   Galerie Biró:  http://www.galerie-biro.de/