Some of my favorite things… at Modernism + Art20.


2010 marked the 25th anniversary of the Modernism Show. When it first started in 1986, it was the first, and only, show in the world which gathered dealers specializing in Twentieth-century decorative arts under one roof. While that is no longer the case today, as there are so many design shows now, Modernism is still one of the most important shows for any true design junkie.

This year’s Modernism + Art20 show, held at the Park Avenue Armory, was certainly smaller than last year’s but that does not mean that the offerings were any worse. In fact, every booth that I visited had several items which drew my attention. And I must say that the galleries which did not return this year were not missed, at least not by me, as all of my favorites were back and they brought with them plenty of things for me to go gaga over.  Here are my favorites…
African Cuff-Bracelet, ca. 1931 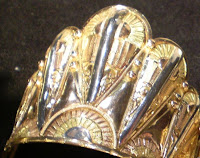 Didier Antiques of London is the premier gallery for artists’ jewelry and I always expect to see rare pieces by artists like Victor Vasarely, Sah Oved, Bruno Martinazzi, Man Ray, Alberto Giacometti, and Arnaldo Pomodoro just to name a few but this year I was surprised to see a an unsigned bracelet which is outside the gallery’s scope. According to Didier Haspeslagh this African cuff-bracelet was imported into France for the Paris Colonial Exposition in 1931. This was an important exposition which was meant to showcase the diverse arts of the Africas. What makes this piece so significant is that it shows how technically capable African artisans were and how well they understood the French market. The African artisans had the metalworking skills and the gold to carry out such a complex design of interlocking African masks yet they were not interested in this type of jewelry themselves and recognized that it was more in the French taste.  This bracelet was created by African craftsman, and in the African style, specifically for the French market. The cuff is made of 18K yellow, pink, and white gold has French import marks. The African mask motif was very popular in the 1930’s and African art was one of the most important influences on Art Deco decorative arts and jewelry. 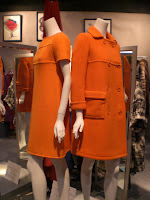 Wool twill dress and coat by Courrèges Haute Couture, ca. early 1960’s
Katy Kane is one of my all-time favorite vintage clothing dealers.  She has the most beautiful pieces for the most sophisticated of tastes. This wool twill dress and coat, by Courreges was designed especially for Florence Knoll. What I love about this set is that that color and fabric reminds me of upholstery which could be found one of the fabulous chairs that Knoll was known to manufacture. Like Eero Saarinen’s Womb chair (1948) in Cato Knoll Textile in Orange. Florence Knoll,

along with her husband Hans, founded Knoll Associates in 1946 and revolutionized home and office design through their manufacture of well-made and well- designed furniture by some of the world’s leading designers of the Twentieth- century. The French designer André Courrèges also revolutionized design, fashion design that is, in the 1960’s by providing women with a wardrobe which was simple yet sexy (he was one of the first designers to dress women in mini-skirts) and was inspired by modern art and architecture.  Both the client and the designer were in their prime when this outfit was created and both believed that good design, whether furniture or clothing, should be available to all.
Wiener Werkstätte Hand-enameled Wine and Cordial Glass, ca. 1924 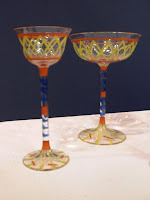 This is the second week in a row that I am featuring a Wiener Werkstätte object in my write-up but that is because I can never get enough. James P. Infante brought these wonderful yellow, red, and blue hand-enameled wine and cordial glasses, 16 in total, to the show. Although the name Wiener Werkstätte translates as Viennese Workshops, when it came to glass, the company actually did not have its own workshop but had its glass designs produced by some of the most renowned glass manufacturers, most notable Lobmeyer. These glasses in particular must have been inspired by Dagobert Peche’s fanciful creations for the firm and perhaps based on a sketch that he once did- but that is all speculation as Peche died in 1923. But the use of bright enamel paint on clear glass was certainly part of his oeuvre.

I found this ceramic stove by Henri Varnum Poor really interesting, very unusual and a great catch for Lillian Nassau Ltd.  The gallery has been, over the last several years, broadening its reach to include great Twentieth- century decorative arts outside of their fabulous Tiffany lamps. Henry Varnum Poor (1887-1970) is not a household name but should be. Poor was recognized by his contemporaries as being a great American painter who founded the Skowhegan School of Painting and Sculpture in upstate New York. Poor was also interested in ceramics and crafts and did wonderful tile work. He built a home for himself on South Mountain Road in New City, New York which was an expression of the Arts and Crafts Movement that Poor so admired. While this stove did not come from this house, it could have come from the home of a friend or neighbor for whom Poor also did work.  Today Crow House is open to the public by appointment and but is also looking for funds that would help turn the Crow House into a full-time museum.

George Nelson Platter Wall Clock for Howard Miller, 1959
Recently, everywhere that I go, I am seeing wonderful wall clocks by George Nelson. Now I am not talking about the stuff that MoMA is still selling today but the originals from the 1950’s and 60’s. This one happens to belong to George Gilpin, a Brooklyn dealer who specializes in modern design from 1940 to 1970. I love the design of this clock in particular because it is meant to resemble a platter and is so different from his Sunburst and Ball clocks.  The clock is made from enameled aluminum, chrome-plated brass, acrylic, string. Howard Miller began manufacturing Nelson’s clocks in 1947 and produced approximately 150 designs. These clocks have since entered the pantheon of great American mid-century design.