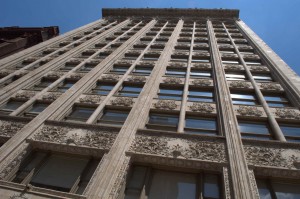 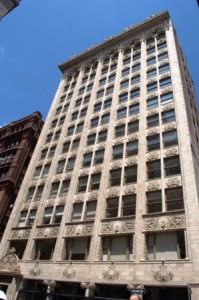 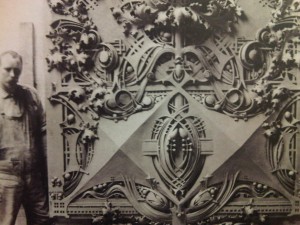 Louis Sullivan in front of one of his designs

I am very lucky to work in one of the most beautiful buildings in all of New York. To my surprise, m 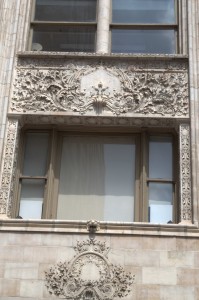 ost people, even architecture buffs, don’t know about it. This is the Bayard-Condict building at 65 Bleecker Street in New York City’s NoHo neighborhood. The Bayard-Condict isn’t only beautiful but is also historically significant for it is the only building in New York designed by Louis Sullivan (1856-1924), “the father of the skyscraper” and the architect who coined the ubiquitous term “form follows function.” Built in from 1897 to 1899, the skyscraper’s steel frame is clad in white terracotta. The beautiful ornamentation through out, including the winged angels at the top, was molded by hand and hand carved. This building is a true expression of the Art Nouveau style and is completely in opposition to the type of skyscrapers that were going up in New York during this time. 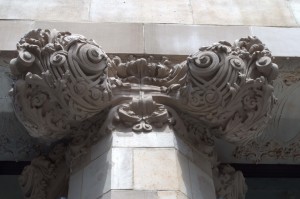 According to his essay, “Architecture and the Development of New York City” on the Columbia School of Architecture’s website, architectural historian Andrew S. Dolkart writes that Sullivan’s only New York skyscraper is very different from those in his hometown of Chicago.  “The New York-style skyscraper—with its Queen Anne or Romanesque or Greek or Renaissance ornament—contrasts dramatically with the skyscrapers that were being built in Chicago by architects like Louis Sullivan, who were determined to use a new style of ornament on the new building type and who also wanted to emphasize the vertical structure of the building.  … Sullivan thought the building should reflect the structure, and you can actually read the very strong 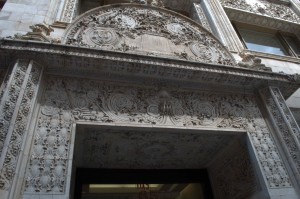 verticals where the steel-structural frame is located on the façade. There are the wide vertical members marked where the structure of the building is and the narrow, spindly little verticals do not go all the way down to the base. They stop above the second floor windows, so it is very evident that those are not structural. Only the wider verticals are structural. The building is white and very bright, so that the building would be very visible. It is actually slightly askew of the New York City grid, so there is a vista to this building. … Sullivan invented a new ornamental aesthetic for his skyscrapers, a kind of organic design that was often based on natural forms, some that you would see with your eyes, some that were visible only with a microscope. The very dense intertwining forms characterized the type of ornament he used on his buildings in Chicago, Buffalo, St. Louis, and elsewhere in the Midwest, and they characterize his one New York building.” 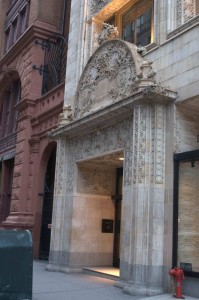 When it was built in the late 19th,  century, the Condict building, as it was originally known, contained offices and lofts. During that time, this neighborhood was considered to be industrial and other six to twelve-story office buildings were being razed around it. The Bayard- Condict has thirteen floors and stand 162 feet (49.5m) tall. In 1897, the United Loan and Investment Company purchased 65-69 Bleecker Street (at Crosby Street) from the Bank for Savings. United Loan hired Sullivan, who had just finished working on the Guaranty Building in Buffalo. The New York-based Lyndon P. Smith served as the associate architect. Just two years earlier, Sullivan’s architecture firm, Adler+Sullivan, closed due to financial problems. After completing the Condict building, Sullivan took up his last skyscraper project, the Schlesinger Meyer department store (1899-1904; now the Carson-Pirie Scott Store) in Chicago. He spent the rest of his career as an architecture critic. It was actually a year earlier that he wrote an essay, The Tall Office Building Arti 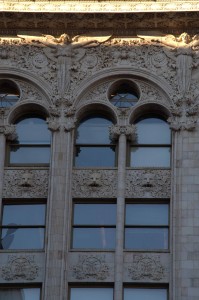 stically Considered, where that famous quote originated from.

In Peter Greenhalgh’s  Art Nouveau 1890-1914, Lauren S. Weingarden writes that “of all Sullivan’s skyscrapers, the Guaranty Building is the most visually akin to the French Art Nouveau style.” I disagree with this statement because while this building is decorated with floral forms, the Bayard-Condict has both floral forms and winged female creatures, one of the most recognizable sym 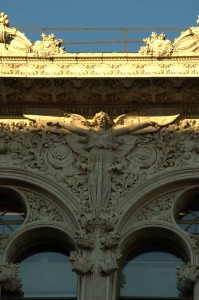 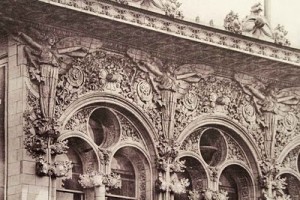 A period photo of the top of the Condict Building

What I love about this building the most is how unexpected it is. Most people walk by and never think to look up but those that do, are pleasantly surprised. Unfortunately the building is often covered in scaffolding while it is being cleaned or repaired so it is hard to get a good look but I often see tourists out of the corner of my eye, step back, look up and take in its beauty.The building was designated a National Historic Landmark in 1980 and the City of New York awarded it landmark status in 1989. In 2003 it was the winner of the Annual Village Award from the Greenwich Village Society for Historic Preservation. 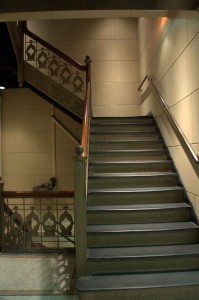 The stairwell on the first floor of the Bayard-Condict Building 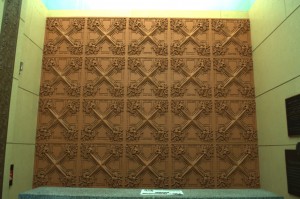 Decorative relief by the entrance-way