The Campana Brothers: Creators of Stuffed Alligator Chairs and… Jewelry? 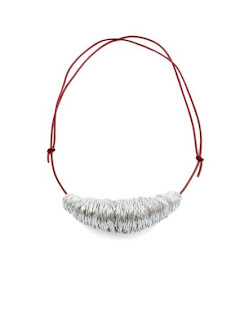 I could go on and on about the wonderful selection of jewelry in the upcoming Precious Design sale from the auction house of Pierre Berge & Associes to take place in Brussels on June 15, 2009. This sale includes unusual and sculptural pieces from such highly regarded jewelry designers as Paul Bablet, Giampaolo Babetto, Art Smith and Harry Bertoia, Gio and Arnaldo Pomodoro, and Pol Bury amongst many, many others.

However, for me, the most interesting aspect of this sale is jewelry from designers that we usually associate with furniture and other decorative objects. One such example are the Campana brothers, Huberto (b.1961) and Fernando (b.1953). The Campana brothers are in the ranks of some of the most highly regarded contemporary designers. Their quirky chairs made with stuffed alligators or teddy bears and, most recently, rag dolls and Mickey Mouse command record prices at auctions and are part of all major museum collections. But their jewelry designs are less unassuming. Featured in this upcoming auction is (Lot no. 305) is the “Casullo” necklace (2004) an aluminum wire pendent spun into a cocoon like shape handing off a red leather string, it is part of 6 necklaces in the Pendetif series. Another necklace in the sale (Lot no. 306) is the “Nest 3 Balls” necklace made of aluminum wire on a brown leather string. The aluminum wire is shaped to resemble a bird’s nest. From a design standpoint this jewelry is interesting and original. And screams Campana brothers! The use of the pliable aluminum is reminiscent of the artists’ use of “irregular woven forms” of stainless steel in their “Corallo” chair (2003) or the use of haphazardly wrapped PVC garden hose around stainless steel of the “Anemone” chair (2001). Furthermore, if we look at the creations that the duo designed for Alessi, bowls, mats, and vases, made of aluminum wire, it is impossible to not see the similarities.

Fernando and Huberto Campana were born in the province of São Paulo. Humberto decided to pursue studies in Industrial Design at the Brazilian Museum of Sculpture after graduating law school. While Fernando, who also studied in the same program at the Brazilian Museum, graduated with a degree in architecture. The duo has worked together in their native city since 1983. The brother’s collaborate one every project together and each plays a vital role: Humberto is responsible for the materials and forms while Fernando is in charge of executing their ideas. In 1989, the duo had their first solo exhibition, “The Uncomfortables”, in São Paolo and since then have taken part in numerous international design fairs and were the subjects of many exhibitions. Including at the Museum of Modern Art in New York and most recently, the Cooper-Hewitt, National Design Museum. Their designs are distributed by such notable companies as Edra, Alessi and Vitra.

Price wise, for anyone interested in the Campana brothers works, this jewelry is a way to reach a broader market. After all, not everyone can purchase one of their chairs which could cost anywhere from $30,000-$40,000. These necklaces are estimated at 600-900 euros ($800-$1,200) and 500-800 euros ($700-$1,100) respectively. However, this isn’t the case with all of their jewelry: in 2006, the Campana Brothers signed a deal with the H.Stern to create an exclusive jewelry line for company, with pieces priced at $50,000 and up. (This must have been a very smart collaboration as H.Stern even sponsored the Campana Brothers exhibition at the Cooper-Hewitt in 2008).

The Campana brothers are part of a long list of designers who have added jewelry to their roster of design objects. The auction also includes pieces by Ettore Sottsass, Line Vautrin, Claude Lalanne, Henning Koppel and Marc Newson.