The Fashionable Evolution of Isabel Toledo

A partnership is a beautiful thing, especially one between two creative individuals. This is what I came away with this morning after previewing the exhibition “Isabel Toledo: Fashion From the Inside Out” at The Museum of F.I.T (from June 17 – September 26, 2009) in New York. The museum is hosting a mid-career retrospective of Toledo’s work which seems timely because while Toledo’s work is widely known in the fashion industry, it was only recently that her name has garnered mainstream attention. This moment came on Inauguration Day, January 20, 2009 when First Lady Michelle Obama chose to wear a beautiful Lemongrass-colored ensemble by Toledo. The exhibition actually opens with this ensemble and accompanying photographs and sketches of its design process.

Isabel Toledo emigrated as a child with her family from their native Cuba settling in New Jersey where, in high school, she met Ruben Toledo, her future husband and now a very talented artist and illustrator. She attended both F.I.T and Parsons and in 1985 held her first fashion show. What is remarkable about Toledo’s designs is how wearable they are. There is not a single outfit in the exhibition that can not be taken off the mannequin and worn out. Toledo’s work also eschews trends, which is incredibly refreshing in this day and age. As Ruben pointed out, Toledo’s clients range from J.Lo and Madonna to a New York lawyer and a stay at home Mom. Her work is admired by designers world-wide, who consider her to be a “designer’s designer.”

However, Toledo labels herself a seamstress and not a designer, in fact she does not sketch. This is where her husband becomes instrumental to her work. He is able to translate her vision on paper. Of their collaboration Toledo says, “I think of it as fashion from the inside out. I can describe the idea or even a feeling to Ruben, and he’ll sketch it.” His work is represented in the exhibition in the form of a ribbon banner, that graces the ceiling of the galleries, with Ruben’s sketches of his wife’s work, in addition to sketch books and dress patterns. But their collaboration goes even further: a beautiful shirtwaist dress made of undyed silk pongee called the “Broomstick Librarian” designed while Toledo was the head designer at Anne Klein in 2007 was hand-painted by her husband.

The exhibition is thematic not and chronological because Toledo’s work goes through an evolution. As she explained, her work begins with an idea which she best expresses through fabric. It is only after she completes it that she is able to step back and place it into the context of her work. For her, it is all about experimentation. She learns everyday and even alters her designs. A dress may be worn differently or altered after she looks at Ruben’s sketch of it. She sometimes returns to particular shapes and sees how she can add onto them. Toledo’s work is placed into categories such as Origami, Suspension, Shadow, Shape, Organic Geometry, Manipulated Surfaces, and Liquid Architecture. This last category, as explained by curator Valerie Steele, refers to Toledo’s method of placing the seams in unusual places so that the garment can flow and have a liquid quality to it. Some of her creations are so complicated yet precise that they remind me of the work of Madame Grès and her legendary Grecian style pleated dresses, this is especially evident in the “Diamond Draped” bodice dresses (Fall 2005). Her silk taffeta creations, from 2005-2006, are perhaps the most regal. Here she works with one fabric to create pieces that are all complete different yet similarly beautiful.

During the press preview, Ruben and Isabel Toledo were both present and individually took the press around the exhibition answering questions. Mr. Toledo was as just as eloquent in explaining his wife’s work as she was, gesturing towards favorite pieces and explaining their construction. This is not the first time that F.I.T honored Toledo, this exhibition expands on a previous show at F.I.T in 1999, “Toledo/Toledo: A Marriage of Art and Fashion” which is still traveling around the country. But according to Ruben, it is most appropriate here because it provides students with the opportunity to learn something new and “to inspire a future generation.” 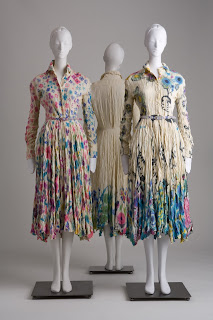 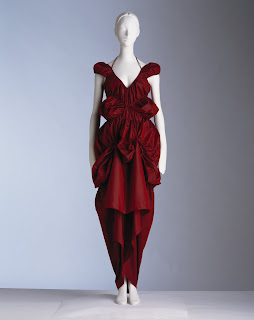 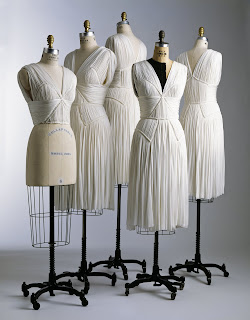 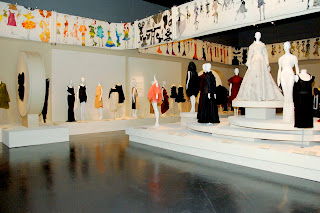 Images, second row, l to r:
“Diamond Draped” Bodice Dresses, finished and unfinished, fall 2005, White rayon jersey. Photograph by William Palmer. Installation view, “Isabel Toledo: Fashion from the Inside Out, at the Museum at the Fashion Institute of Technology, June 17-September 26, 2009. Photograph by Patrick McMullan Co. All images courtesy of the Museum at F.I.T.