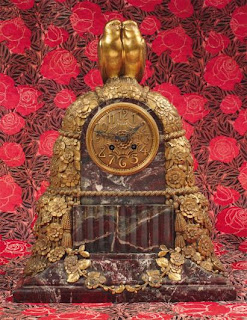 Designed by the great French Art Deco master Paul Follot, this pendulum clock is one of the most incredibly beautiful and romantic objects that I have seen in a long time. The clock, topped by two smooching parakeets, is made of rare red veined marble and carved gilt wood. The surrounding floral decoration was Follot’s trademark and embellished not just his furniture but also his dinner plates and wall coverings. The Parisian auction house Camard & Associates sold it last month for 31,000 euros.

Paul Follot (1988-1941) was considered to be an Art Deco “purist” and was inspired by French eighteenth-century decorative arts. He had a very impressive career which began in 1901 when he joined the renowned gallery La Maison Moderne run by Julius Meier-Graefe. During his lifetime, while he worked successfully as a free-lance designer, he also held several important positions: he served as director of Pomone, the furniture design studio of Au Bon Marche, the exclusive Parisian department store, and was the artistic director of the French outpost of Waring & Gillow, an important English furniture company. Some scholars say that his work inspired that of another French Art Deco master, Emile- Jacques Ruhlmann.