The International Fine Arts and Antiques Dealers Show at the Park Avenue Armory came to an end earlier this week but not before I had a chance to scope out the goods. With the proliferation of antiques and design shows these days the IFAADS, along with the Winter Antiques Show, has remained the most important show of its kind. Where else can you see antique maps, aboriginal art, contemporary ceramics, artist jewelry and Art Deco furniture all under one roof? Below are just a few of this things that caught my eye. 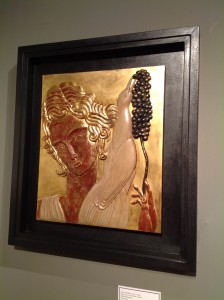 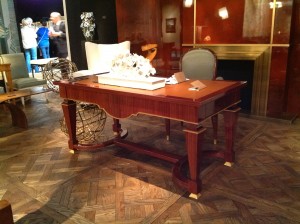 Andre Arbus was one of the most important furniture designers of the 1930’s and 1940s. Everything about the design of this writing desk, the leather top, the border around the apron, strong legs and the gilt-bronze sabots, is typical of his style and his predilection for  furniture in the French Empire style. 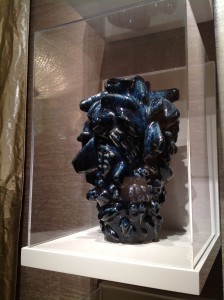 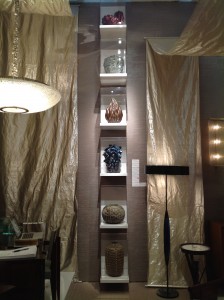 An impressive collection of Axel Salto’s vessels for Royal Copenhagen, where the artist developed unusual glazes and forms from the 1930’s until his death. A standout was this organic vase, measuring 16.5″ high , in a rich cobalt blue. Salto was the most important Danish ceramics designer in the twentieth-century. 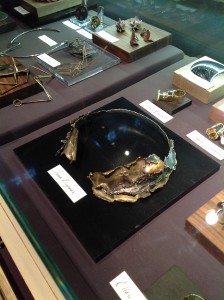 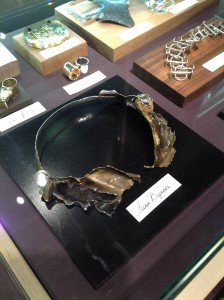 A Collar/Necklace by Irena Brynner, Silver & Bronze mixed metal forged and welded
collar, open in the front with one tan stone, c. 1975, at Nexxt20, Dallas.

This fabulous open collar necklace by Irena Brynner is typical of her design for necklaces which often did not have any clasps or fasteners and were supposed to be wrapped, not hung, around the neck. The Russian-born Brynner was a founding member of the seminal Metal Arts Guild in San Francisco in 1951. 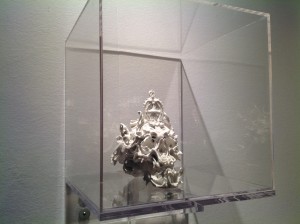 Each unique skull in the Predictive Dream Series is cast in porcelain by Japanese artist Katsuyo Aoki. The artist’s material of choice is just as fragile as the subject matter. 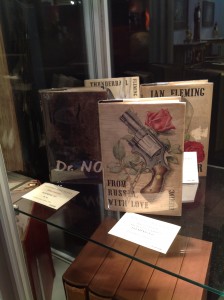 It is hard to believe that it has been fifty years since the premiere of the first James Bond film. In October 1962, “Dr. No” captured our imagination on the silver screen, followed by “From Russia, with Love” a year later. However real James Bond fans need to add these first editions, priced at about $10,000. each, to their libraries. 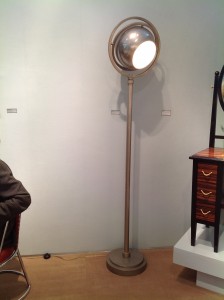 This floor lamp by Damon, a lighting designer, and Charles Martin, a designer, illustrator, and interior designer, who were both active in France during the 1930’s, looks like it belongs on a film set. Damon was interested in designing single lamps that could provide both direct and indirect lighting. Martin’s role in the design of this lamp is unknown and has brought a bit of controversy to this particular model.