Last Tuesday’s event at the 92nd Street Y called “Karim Rashid and Gaetano Pesce: Dialogues with Design Legends” it should have really been called the “The Karim Rashid Show.” Martin Filler, the renowned architecture critic and former editor of House & Garden magazine, moderated the 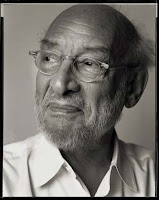 conversation between the two design legends which at times felt more like a monologue delivered by Rashid. In his introduction Filler alluded several times to the recently opened Bauhaus exhibition at MoMA, in particular how the avant-garde art school changed the role of design in our society which has resulted in the discourse on design to evolve over the decades. Setting the stage for a discussion between these two exceptionally prolific industrial designers, he referred to them as “legends” and “giants” in their field. While these two men are generations apart their work is rooted in the same ideologies: disseminating good design to the public, exploring new technologies and materials, and narrowing the gap between utopian ideas and practical objects.

From Pesce’s presentation it became evident that politics and emotions strongly influence his design work. A soft-spoken man who, after residing in New York since the 1980s, has not lost his Italian accent; he is a pleasure to observe. For him a piece of furniture is not simply a utilitarian object but a means to expressing his views on topics like women’s role in society (see “La Mamma” chair, from the UP series, 1969), war and social injustice (see “Anne Franck” cabinet, 1993), and his beloved hometown of New York (see “Sunset In New York” couch, 1993). Using new materials has always been an important aspect of Pesce’s design methodology. He has been at the forefront of using polyurethane, like with the UP series, and has made unbreakable vases, such as the “XL” vase (2004), of urethane and not glass. Pesce believes that the future of design is about individuality and client participation. This belief will become the theme of the evening’s discussion. Pesce concluded with the thought that one does not need to go far to be inspired or to be creative, we just need to look around and be aware of our surroundings.

Rashid picked up where Pesce left off by sighting that creativity has no limits. This was a lesson that his father, also an artist, taught him. In fact Rashid dedicated the evening to the memory of his father who had passed away 6 years to the date. In his introduction Rashid did not focus on any particular works instead spewing his design ideologies. According to him the industrial designer is an artist of real issues who shapes social behavior. Incredibly articulate and erudite, one would be hard pressed to dispute with him. Rashid concurred with Pesce that the notion of creating non serialized objects is the way of the future. In fact, Rashid stated that this idea of being able to customize everything and create objects that are completely unique was planted by Pesce into his head when he took a course taught by the latter in Italy in 1983.

Both men agreed that in today’s digital era they are dealing with intelligent consumers who want to personalize everything according to their needs and who are quick to embrace change. This is also why it is so important for industrial designers to be willing to experiment with new materials and explore new technological advances. Consumers need to be kept interested otherwise they get bored. Finally, it is impossible to be innovative with traditional materials so it is their duty, as industrial designers, to use new materials. In the end, regardless of what you create, it will always be considered new because no one else has used that material for that particular object before.

At some point in the evening it became evident that the two men, whose accomplishments can fill up much more than a single page on this blog, may have similar ideas on design, but are completely different in their behavior, perhaps a product of their time. While the veteran Pesce had more to share, it was the brash Rashid that dominated the evening’s discussion.