The Very Best of Modernism

This past weekend Sanford Smith brought Modernism to the Park Avenue Armory. The show, in its 24th year, was full of goodies. This year it was extra special because it was combined with the Art20 show. The decision to merge the shows was a good one, not only do they complement each other but also as the economy weakened and dealers pulled out of doing shows, a joint venture resulted in enough galleries to bring us one good fair instead of two lackluster events.

Walking into the armory I figured that instead of doing my usual review of the show I would go in and shop. Yes! Shop. What would I, a design lover, buy if I had unlimited funds? Sounds good, right? Well, a girl can wish. My top FIVE picks (in no particular order) are a mixture of jewelry, furniture, fashion, decorative objects, and an album. Please contact each gallery for more information. 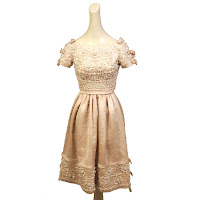 abulous YSL for Dior Beaded Silk Dress at Katy Kane
This incredibly chic cocktail dress from the late 1950s was designed by the very young Yves Saint Laurent, who, in 1957, went from being Christian Dior’s assistant to the designer of Paris’s premier fashion house. The elaborate embroidery was done by the renowned Parisian firm of Lesage. To this day the workers at Lesage are responsible for the most beautiful and sophisticated beading and embroidery that the world has ever seen. This gorgeous dress, a chic alternative to a wedding dress, is a size 2 and, alas, a bit too small for this soon to be blushing bride. Katy also sells this dress through 1stdibs.com. 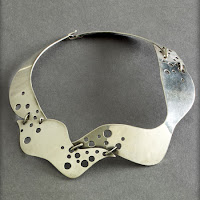 Personally I do not think that beautiful jewelry needs to have big diamonds. In fact, I prefer jewelry that makes a statement through its design as opposed to boring bling. That is why this sterling silver collar necklace by the Modernist New York studio jeweler Art Smith, from the 1950’s, captures my attention like no other. Not only is it unusual to see jewelry made my Smith in sterling silver, as his material of choice was cooper or brass, this necklace, is incredibly beautiful and also easier to wear then some of his larger pieces. The holes in the wavy sections along with the jump rings ornament the necklace without making it too decorative. A real beauty! In fact, Nexxt20 had so many amazing pieces of jewelry that I really had a difficult time choosing just one. Also available through the gallery’s website. 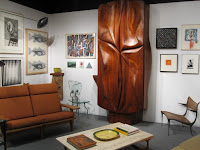 Incredible Phillip Lloyd Powell Wall Unit at LA Modern Auctions
This wall cabinet, made in 1968, is by far the best piece of Powell furniture that I have ever seen. You may recall that I wrote about Powell in my June 30th blog and praised him as being one of the most interesting craftsman to emerge from New Hope, PA. Well this piece surely confirms that. The wall unit, which stands 9 feet tall, was created for a Philadelphia client. Powell taking into consideration the client’s petite frame, added a small step ladder that slides out from underneath to help her reach all the shelves, which are revealed once the doors are opened. The cabinet is equally beautiful on the inside as it is on the outside. Powell included wonderful details like small carved and painted wooden heads, which he found while traveling and used it to decorate the inside. The cabinet is made of American black walnut, a wood indigenous to the area that was also favored by another New Hope resident, George Nakashima. See LA Modern’s site for more information. They also have a wonderful blog. 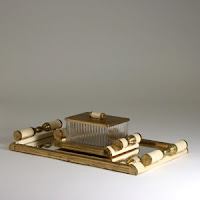 I fell in love with this pretty Art Deco tray and chocolate bowl, circa 1920’s, from Germany. Made of glass, wood and gilded metal, I found it to be charming and a nice accessory that can be placed on a coffee table and filled with delicious bon bons. The scroll-like handles make me think of bows and the cream and gold colors remind me of a color palette that can be found in the décor of some old and regal patisserie or coffee shop. Visit the gallery’s website to for more information. 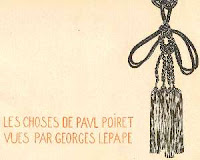 Leonard Fox Rare Books
This fashion album, commissioned by the renowned couturier Paul Poiret and illustrated by the Art Deco illustrator Georges Lepape, is ALWAYS on my wish list. Published in Paris in 1911, this album, unlike its predecessor titled “Les Robes de Paul Poiret” and illustrated by Paul Iribe in 1908, demonstrates the influence of Leon Bakst on Poiret’s fantastical creations, which were worn by every self-respecting grand dame of Parisian high society. Poiret was ahead of his time and constantly came up with new ways to beautify the world around him. He didn’t just leave a mark on fashion but also on the world of furniture and textile design, he opened a school for young girls titled Les Ateliers de Martine, named after his daughter Martine, and successful marketed the first fragrance ever launched by a fashion designer, in 1911, aptly named after his other daughter, Rosine. Visit the gallery’s website for information.