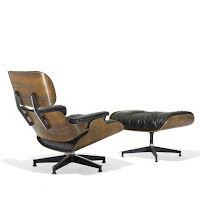 There is a very interesting auction taking place today at Wright auction house in Chicago. While it is not so uncommon for Wright to include furniture by Charles and Ray Eames as part of their Important Design sales, this auction is solely dedicated to the work of these important mid-twentieth century American designers. The bulk of the sale comes from the Eames Design Archive that was put together by John and Marilyn Neuhart. The Neuhart’s were the official archivists of the Eames Office. According to the auction house, “The Neuhart’s amassed nearly 100 binders containing photographs, copies, negatives and clippings of nearly all Eames Office production as well as thorough records of the 1976 exhibition Connections: the Work of the Office of Charles and Ray Eames, a scenic cloud backdrop from the Eames Office, a scale model of the Eames Office as it was at the time of Charles Eames death in 1978 and a copy of the complete inventory of Eames’ projects for the IBM Corporation including records from the Mathmatica exhibition.”

Wright has put together a fabulous website about the research archive so for anyone interested in the work of these genius designers can preview it without flying off to Chicago or investing in it.

Alongside the archives the auction 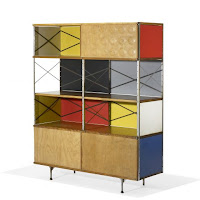 will feature ephemera, furniture, and design objects that have come from the homes of other collectors. What is also nice about the sale, is that the estimates are reasonable and young collectors can finally own a piece of Eames furniture without having to purchase it from DWR.
Images courtesy of Wright Auction House. (l-r, t-b) 670 Lounge Chair and 671 Ottoman, USA, 1956, manufactured by Herman Miller (Lot 637); Photograph taken by Charles and Ray Eames of Isamu Noguchi and his wife at the Eames house, 1952 (Lot772) and ESU 400, USA, 1952, manufactured by Herman Miller (Lot 639)