The Year in Fashion at the ICP, N.Y

August 11, 2009 0 comments Article Fashion photography, ICP NY
This has been a remarkable year for fashion photography enthusiasts. The International Center for Photography in New York has hosted several exhibitions, which started in January of 2009, dedicated to this subject. The exhibitions focus on the most important photographers of the twentieth- century. The program included “Weird Beauty: Fashion Photography Now,” “Edward Steichen: In High Fashion: The Condé Nast Years,” and “This is Not a Fashion Photograph,” and “Munkacsi’s Lost Archive” (all from January 16- May 3, 2009), and more recently “Richard Avedon 1944-2000” and “David Seidner: Paris Fashion 1945,” both on view from May 15 through September 20, 2009, curated by Carol Squiers and Vince Alleti. Below are my reviews of the two last exhibitions.

It is remarkable that Richard Avedon’s photographic work was so varied and incredibly timeless. The photographer who worked until he was 81 was able to pick up on the changing tides of fashion and stay current. “Richard Avedon 1944-2000” delights connoisseurs and laymen alike. This exhibition, which solely focuses on Avedon’s fashion photography, reinforces what we already knew upon entering the gallery: Avedon was one of the most important fashion photographers of the twentieth-century.

As Christian Dior was revolutionizing fashion with his New Look in 1947, Avedon was revolutionizing how fashion was being captured on film. Some of Avedon’s most memorable photographs are from this time period. Squiers analyzes that the young Avedon brought to post-war Paris a “new and fresh American sensibility. He created a new and more complex notion of the twentieth-century woman in motion.” He took the models out of the photo studios and photographed them on the streets of Paris: captured in the Marais neighborhood, in smoky cafes, standing on an anonymous war-torn street which he made look elegant, or amusing themselves in the Jardin de Tuileries. The setting became just as important as the model and the ensemble: “Dovima with Elephants” at the Cirque d’Hiver (Harper’s Bazaar , September 1955) is one of the most iconic fashion images of all time. The setting of some of the images was so arresting that the image was like a Surrealist work of art, specifically in “Elise Daniels with street performs, Suit by Balenciaga, Le Marais, Paris” (Harper’s Bazaar, October 1948), it is if the model was dropped out of the sky and into this perverse setting where no one but one man is wondering where she came from.

The 1960s allowed Avedon to reinvent himself. His relationship with Harper’s Bazaar dissolved in 1965 when Carmel Snow, its Editor-in Chief, and Alexey Brodovitch departed the magazine. This, however, allowed Avedon to join Vogue, where he worked with Diana Vreeland and Alexander Liberman, another Russian émigré art director. During this time, Avedon captured the new youthful generation of models and the changing fashion trends. He began to photograph ethnic models and models of color (Harper’s Bazaar forbade it and he threatened to quit) and famously captured the African-American Donyale Luna and the Portuguese China Machado. The work from this period is also slightly more erotic and daring. Is there a ménage a trios planned in “Ana-Maria Abascal and Naty Abascal with Helio Guerreiro, Bathing suit by Brigance, Ibiza , Spain” (Harper’s Bazaar, January 1965)? What about a sultry and seductive Lauren Hutton blowing smoke from her cigarette or simply nude on the beach? In front of Avedon’s lens in “Veruschka, dress by Kimberly, New York, January 1967” the model Veruschka is weightless, employing a technique critics referred to as the “Avedon Blur.” But perhaps his biggest discovery was the model Twiggy, whom he first photographed in his studio on East 58th Street in 1967.

At Vogue Avedon changed his style: he was no longer photographing models out and about. According to Alleti, during this time he did mostly studio work and “compressed the movement on the street, the attitude and the exuberance and excitement and put that into the studio.” He left the magazine in 1988, when Anna Wintour took over as Editor-In-Chief. In 1992 he became the first staff photographer for The New Yorker magazine and captured every important actor, politician and activist in the world. His “return to fashion” as The New Yorker announced was in 1995 when he shot for them a remarkable color portfolio of the model “Nadja Auermann and a Person Unknown.” This incredibly series of images titled “In Memory Of the Late Mr. and Mrs. Comfort” (The New Yorker, November 6, 1995) was a twenty-five page “fable” set in “post-apocalyptic ruins” about an unlikely couple, she is a Supermodel and he is a skeleton, in various situations: playing dress up, smoking, kissing, and having sex. Alleti believes that “the skeleton was a stand-in for Avedon.” Perhaps this is true as the photographer always had a love affair with his models, even marrying one.

Avedon was not just a fashion photographer, although this is how he made his living, and certainly his fashion work would not be possible without his portraits (and vice versa). Avedon was intelligent, curious and incredibly ahead of his time. He captured the political turmoil in his country: trials, anti-war movements and uprisings in the South. He was also responsible for the highly regarded “The Family”, a series of photographs on politicians for Rolling Stone magazine (1976) and cowboys for “In the American West” (1984). Avedon never retired; he passed away while on assignment for The New Yorker in 2004.

Surveying this exhibition on a recent evening, the model Daria Werbowy was walking around the galleries and just like other visitors she must have felt nostalgic. The only cure is to watch Fred Astaire as Dick Avery in Funny Face (1957), based on the photographic genius, and fantasize about a time long gone. Or buy the incredibly beautiful exhibition catalogue, “Richard Avedon 1944-2000” (Harry N. Abrams Inc., 2009) written by the curators, Squiers and Aletti.

Fashion, like every other aspect of life, was hit hard during WWII. When the allies liberated France they were surprised to see that the country did not uphold the imposed wartime silhouette which was in place due to strict fabric rations. But Lucien Lelong, the President of the Chambre Syndicale de la Couture Parisienne since 1937 was fiercely loyal to his designers. Lelong was an established designer in his own right and understood that implementing such a decree would result in the shuttering of fashion houses in Paris. At this point, Lelong had already fought hard for the haute couture industry since in 1940 he had gained permission from the Nazi party to allow the fashion houses to remain in Paris and not move to Berlin. Additionally, when in 1941 the Nazi’s began to ration fabrics, Lelong once again fought them and gained exemptions for the 12 main Parisian couture houses. During the war Lelong employed some of the most promising young designers, like Pierre Balmain and Christian Dior, at his synonymous fashion house. At the end of the war, Lelong was able to “save” the fashion industry and by doing this he saves the workers, an estimated 12,000 people, from being sent to Germany.

From 1945-1946 Lelong launched Theatre de la Mode, an exhibition of 230 dolls all attired by top Parisian designers (Balenciaga, Jacques Fath, Elsa Schiaparelli, and Balmain all participated) and sets created by some of the most renowned artists of the twentieth-century such as Jean Cocteau, Christian Bérard, and Joan Rebull. The sets all recreated daily Parisian life, a reminder of how things were before war tore everything apart. The goal of the exhibition was to show the world the importance of fashion and in particular to demonstrate that the French were the leaders of this craft. The exhibition of these dolls, two feet tall with wire torsos, opened at the Pavillon Marsan at the Musée des Arts Décoratifs and went on to travel throughout Europe and America. The tour was able to raise money for war victims and also raise money for the French fashion industry. In the end, Lelong and his Theatre de la Mode were responsible for saving the French fashion industry after the war.

Eventually the dolls were donated to Maryhill Museum in Portland, Oregon however on the 45th Anniversary of the exhibition, the Musée de la Mode in Paris resurrected the dolls and Seidner photographed them. The photographs feature dolls wearing the designs of Patou, Madame Grés, Fath, Balmain, Rochas, Balmain and Piguet. There is such beauty in the way that Seidner posed them, as if they were real women. Studying the photographs one is in awe of the detail and craftsmanship that went into creating each gown and suit. The ensembles are complete: hats, shoes, jewelry and accessorize each number. A Balenciaga skirt has a beautiful wrap-tie front while the Patou, “Fleur de Mal” ensemble features a see-through top with lace and sequins. Yet the photographs are slightly surreal and sad. Assembled in a group the dolls do not interact the way real models would. Another doll reminds us that she is in fact just a mannequin as a head, resembling her, lies next to her foot.

It is poignant that the single the doll featured in the exhibition is clothed in an ensemble from the Maison de Couture of Lucien Lelong. Interestingly it is a dress designed by the young Christian Dior (then employed by Lelong), who would go on to revolutionize Paris fashion and catapult it to the front lines only several years later, in 1947, with his New Look. Elements of his feminine vision were already evident in the slightly padded hips of the blue silk dress.

What is sad is that these dolls represent a time when women were unable to wear such beautiful designs; fashion was simply not on their minds. 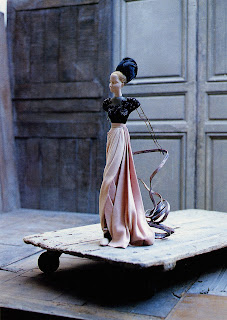 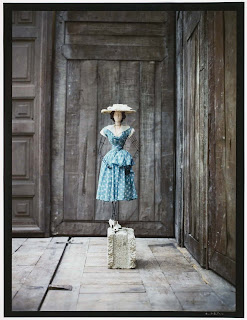