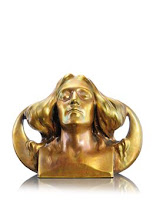 Christie’s sale of 20th Century Decorative Art & Design in London (on April 21, 2010) is full of wonderful Art Nouveau objects. Two things in particular clearly stand out: Carlo Bugtti’s furniture and ceramics from the Hungarian manufactory of Zsolnay. I first encountered this firm’s work, and wrote about it here, in the guise of “Venom” a snake from Yves Saint Laurent’s personal collection, at the IFAADS at the Park Ave Armory show in October. Jason Jacques had a wonderful collection of Zsolnay ceramics which he displayed at his booth (including “Venom”).

The Zsolnay Porcelain Manufactory was founded in Pécs, Hungary in 1853 by Miklos Zsolnay and has a long and rich history. The co 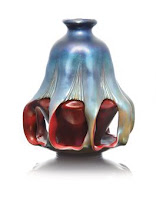 mpany was a family business with the founder’s sons participating in the day to day activities of the factory, nurturing the company’s output and, finally, in 1873 participating in the World’s Fair in Vienna and in 1878 in Paris, where the manufactory was awarded with the Grand Prix or the gold medal. Other exhibition followed: Melbourne in 1880, Brussels in 1888, Chicago in 1893 and Antwerp in 1894.It was around t 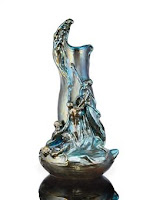 his time, in 1896 to be specific, that Zsolnay developed the eosin glaze (named after the Greek goddess of dawn, Eos), an iridescent finish used on the pottery that made their wares so desirable and the firm world renowned. The iridescent glaze looks similar to Tiffany’s favrile glass. According to the company’s website, the emperor awarded the Franz Joseph Order to Zsolnay’s youngest grandson, who was now in charge, and the city of Pécs gave him the title of Honorary Town Citizen! Both were very high honors.

In the beginning of the 20th century, with the onset of the Art Nouveau movement, the company’s nature-inspired vases and bowls garnered quiet a following. Lots 1 and 4 are two of the most spectacular vases, in my opinion, and were both designed by Sandor Apati Abt (1870-1916), one of the factory’s designers. Zsolnay’s contribution to the Paris Exposition of 1900 was also significant. They created over 30 figures of Hussars, about 12.5 inches tall, in traditional attire for the Hunga 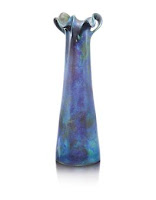 rian Pavilion, as well as a figure of the Emperor Franz Joseph on a horse. And two of its designers, Apati Abt and Tádé Sikorski (1852-1940) were both awarded medals. Sikorski’s work is represented in the sale with lot 6, a beautiful linear blue vase with curvy handles.

Other than their discovery of eosin, Zsolnay also produced pyrogranite, which is another type of ceramic. When fired under a high temperature pyrogranite becomes acid and frost-resistant. This made it attractive to architects and designers who were looking for a durable material to use as decoration outdoors and so Zsolnay’s pyrogranite tiles were used to adorn the exteriors of the Matthias Church, the Hungarian Parliament Building, the Museum of Applied Art, the Geological Institute, the Kőbánya Church, and the Gellért Baths, all in B 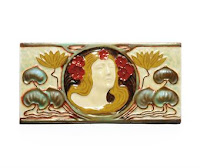 udapest. Lot 14 of the sale is an example of such a tile. The image of a woman with long, flowing hair is quintessential Art Nouveau.

In 1914, the factory was the largest company in Austro-Hungary. The onset of World War I and World War II crippled the company’s productivity and in 1948, under Communism, the company was nationalized and remained this way until 1982. In the last decade, the company has regained its name and has started to build back its image. However, as usual, I prefer the old pieces to the new ones that are being produced today. There is a certain elegance that is missing from the new pieces.